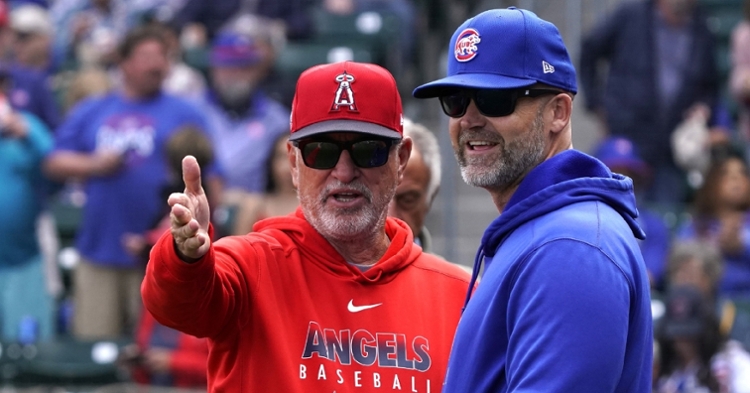 As the Cubs and rookie manager David Ross took on former Cubs' skipper Joe Maddon and the Angels on Monday in Mesa, it is evident just why the organization decided to make a change at the top step of the dugout ahead of the 2020 season.

The Cubs ultimately won the contest against the Halos 9-4 but the main focus was on Joe Maddon's reunion with his former squad — one that he led to their first World Series title in over 100 years and also left with a bit of a bitter taste left in the mouths of Cubs fans.

By the end of Maddon's five-year tenure, it seemed like the time was right for the Cubs and cool Joe to part ways. The organization-wide need for accountability and structure was not something that Maddon was fit to provide — and Maddon's message appeared to have grown stale among the underachieving group of players who had not met expectations for a few consecutive seasons.

Maddon moved on quickly, returning to his west coast and early career roots by inking a huge deal for a manager with the Los Angelos Angels of Anaheim, the same place he spent the first 31 years of his career.

Following the Cubs' final series in St. Louis last season, Maddon and Theo Epstein met the media with their wine glasses, celebrating the successful five years the pair spent together. The reason the split seemed to work was the Cubs got to hire the man they had seemed to have been grooming to take Maddon's place in David Ross, and Maddon was still a highly coveted manager, up for a new challenge.

While Maddon runs a relatively loose ship in the clubhouse, Ross seems to be a significant change of pace. Ross differs from Maddon in a sense that he is more demanding of his players, better at holding his players accountable and more analytically advanced as the game continues to shift that way. Ross' initial press conferences and appearances in Spring Training seem to have the word accountable as a buzz word, as well as introducing a more heightened focus on structure, preparation, and togetherness in the clubhouse.

Thus far, it has translated into a new hunger from the players, and a noticeable difference from the way Maddon ran things.

Javier Baez said to The Athletic that on many occasions "We weren't ready," mentioning that Maddon trusted his players to prepare on their own and as a result players like Baez were still getting loose in the early innings of the game (which may have led to the Cubs being ranked third worse in the league in terms of errors last season).

"It wasn't something bad, but we have a lot of optional things," Baez said during media interviews. "Not mandatory. Everyone kind of sat back on that, including me. I wasn't really going out there and preparing for the game. I was getting ready during the game, which is not good."

Baez even alluded to that leading to some of the early game struggles the Cubs had.

"You can lose the game in the first inning. Sometimes when you're not ready, and the other team scored on something simple, I feel like it was because of that. We weren't ready."

Baez continued on what the solution to that problem is: "For me, it's thinking as a team. We haven't been doing that the past two years."

And that attitude seems to coincide with that of the new skipper.

Kris Bryant had his own opinions on David Ross, this time about his first speech to the team.

"I wanted to run through a wall," Bryant told the Athletic.

Various members of the media, as well as fans, began to speculate that this was some type of knock on Maddon or the way he ran things when he was the manager. A couple of Cubs, including Bryant, were sure to clear the air before the contest on Monday.

Bryant said the Cubs could not have won the World Series without Maddon.

And that's precisely what Maddon will be and should be remembered as the perfect guy at the perfect time. But now as the future is the priority, the Cubs believe they've found the right guy to steer the ship in David Ross.