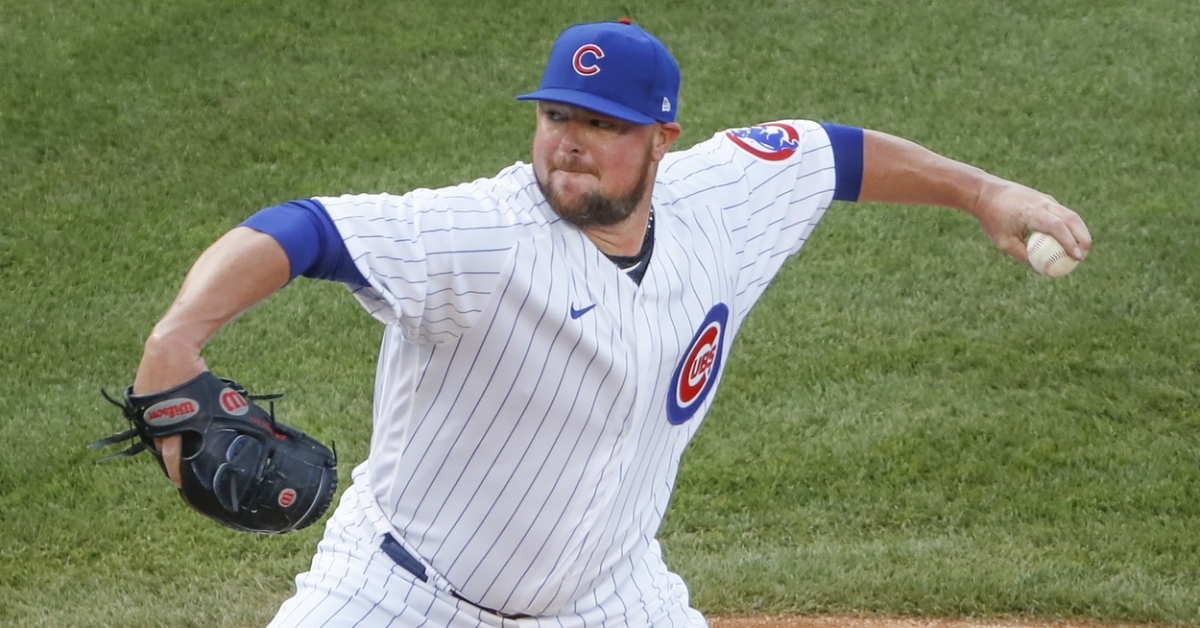 As predicted, Big Jon will drop from first to third in the Cubs rotation this summer. Age happens, and Jon knows that he’s entering the twilight of his career. Always a team player, Lester took a backseat to Kyle Hendricks and Yu Darvish without complaint, setting his sights only on winning.

Lester looked good early, working 10-pitch first inning. It took the Twins an extra three batters in the second to net their first hit – a two-out double to the left by Rosario.

Lester’s change-up looks good, which is good news, as Jon is losing velocity with age. He managed to pitch himself out of that mini jam in the second inning by inducing a groundball out.

Lester would have to grind in the third but managed to pitch himself out of a two-on-two-out jam without issue. Lester would also work the fourth in another scoreless effort, reeling in his fourth K of the night. Using only eight pitches in the fourth, Lester would start an extra-inning, but would only retire one. Lester ended his night with 4.1 IP, just one hit allowed, a pair of walks, and a four K’s. Nice outing, Jon!

Jon Lester gave up one hit in 4.1 IP tonight. pic.twitter.com/mA7hHmml0K

Ian Happ/Anthony Rizzo Dear, Rossy, please put Ian Happ in the leadoff spot as I suggested. You did that tonight and look what happened. A leadoff single to the left in the bottom of the first, followed by Anthony Rizzo’s massive jack to center. Voila. Cubs up 2-0 after just a handful of pitches.

Happ then drew a walk during his second at-bat of the night, followed by a Rizzo single to the left. This combination works. Fast forward to the fourth, and Happer draws another walk, making his OBP 1.000 from the leadoff spot, as opposed to Bryant’s .167 OBP through 2 games at the leadoff spot.

Kris Bryant For those who didn’t see the game, the other half Bryzzo (KB) was sat out as a precaution due to lower back stiffness – must something contagious between him and Rizz. David Ross did say that had this been a regular game, KB would have been in there. Maybe not the greatest news, as he’d have led off, and the Cubs may not have had that insurance run early.

Ross did do a little flip-flopping last night, starting Kipnis at second, with Schwarber as the DH. Ian Happ manned cleft, while Albert Almora Jr. got the start in center.

Willson Contreras There’s nothing wrong with Willson Contreras’ swing. He hit a bomb off of Homer Bailey in the first, then did it again in the third, putting the Cubs up 4-0. Willy then singles in the fifth, making him 3 for 3 on the night.

Dillon Maples Maples would come on in relief of Lester, inheriting a runner. After allowing a man to reach, he served up a wild pitch, advancing the runners to second and third. Maples would come back on a 3-2 pitch with a filthy slider to get Garver. His next hurdle was Josh Donaldson.

With Donaldson down 1-2 in the count, Maples let a wild one go, allowing the Twins their first run. He’d end up walking Donaldson. He’d then hurl another wild pitch, leading to another run for the Twins (now 4-2, Cubs). Ross may have pulled Maples sooner, but oh, that new three-batter minimum rule. Maples would fan one to end the frame.

Casey Sadler: I like Sadler. His attitude is good, he’s fan-friendly, and the kid works hard. He struggled some last night, issuing a walk to Sano, then giving up a single to Rosario. Sadler managed to get a flyball out to Bote (now playing left field), and then got Kepler to fly out to Almora to earn himself a scoreless frame.

Kyle Ryan: The Cubs need good things from Ryan again this year, but he failed to impress last night. He didn’t start out well last night, beaning Arraez on the elbow. Ryan would get a groundball, but it was only good enough for the force at second. He’d give up a single to Donaldson, then walk the next man to load the bases. Ryan got another groundball, but again, only the force at second, allowing another run to cross. Ryan would get a groundball from Sano to end the frame and preserve a one-run Cubs’ lead.

Duane Underwood Jr.: Underwood managed to grab a pair of quick Ks to start the eighth last night. His breaking stuff looked excellent last night. He’d end the inning by getting Kepler to line out to Jason Heyward, working just a 3-pitch frame. I think you’ll see a bunch of Underwood this year if he keeps it up.

Brad Wieck: Wieck would get the save last night and looked good in the process. After giving up a leadoff single, Wieck would fan the next two and end the game on a flyout.

As you may recall, Wieck underwent a heart procedure earlier this year to correct an irregular heart rhythm. He appears to be fully healed and healthy at this point.

Well, that’s it for the exhibition matches, after a final off-day tomorrow, the Cubs will open up Friday night against the Brewers. I still have some concerns about the bullpen and a somewhat spotty offense, but we’ll see if David Ross can piece it all together.