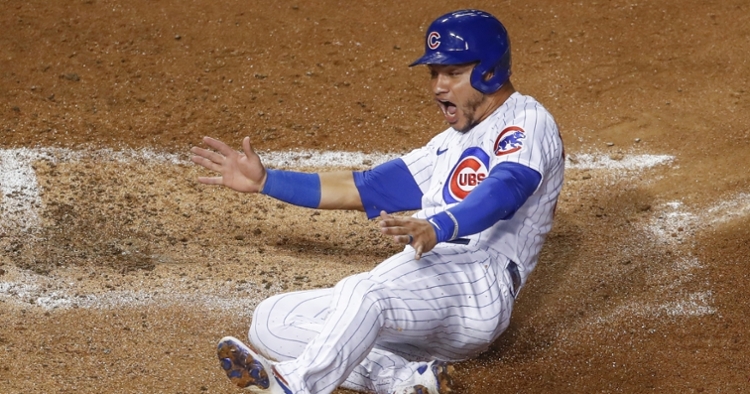 Just for the fun of it, Willson Contreras slid across the plate upon reaching home with ease on a Jason Heyward triple. (Credit: Kamil Krzaczynski-USA TODAY Sports)

CHICAGO — No rest for the weary. Fresh off a day-night doubleheader and set to play two more on Wednesday afternoon, the Chicago Cubs (15-7) and the St. Louis Cardinals (5-6) learned that old adage the hard way on Tuesday night. In an action-packed contest that lasted over four hours, the Cubs pulled out a 6-3 win over the Redbirds.

The third installment of a five-game series at Wrigley Field saw Cubs ace Yu Darvish pitch six innings of one-run ball, in which he struck out seven. At the plate, the North Siders tallied five extra-base hits, including home runs by Ian Happ and Kyle Schwarber and an RBI triple off the bat of Jason Heyward.

B1: Daniel Ponce de Leon started on the bump for the Cardinals and tossed 3 1/3 innings of two-run ball, in which he fanned seven. Happ, who served as the leadoff man with Kris Bryant out due to injury, hit a single in the Cubs' first plate appearance of the night. Ponce de Leon struck the next three batters out swinging, including Anthony Rizzo, who embarrassingly whiffed at a pitch that beaned him in the thigh for his third strike.

Daniel Ponce de leon strikes out Anthony Rizzo on a pitch that hit him in the leg ?? pic.twitter.com/banDF16Iu5

T2: Darvish got taken for a pair of one-out singles before the Cubs turned a 6-4-3 double play.

B2: Other than a two-out walk drawn by David Bote, the Cubs did not muster any offense in the second frame.

T3: Kolten Wong reached via an infield single with one out, which set the stage for another inning-ending double play. This time, a 5-6-3 double play was turned by the Cubbies.

B3: Happ powered out his fifth home run of the season with a 382-foot solo blast to left. Ponce de Leon struck three batters out swinging in the third but could not avoid getting taken deep by Happ.

Oh, the wind is blowing in?

T4: The Cardinals squandered a golden scoring opportunity in the fourth. Paul Goldschmidt's leadoff single was followed by a Matt Carpenter double. Brad Miller walked to load the bases, but Dylan Carlson then grounded back toward Darvish, resulting in a force out at the plate. Former Cub Dexter Fowler struck out after that, and Matt Wieters lined out to leave the three baserunners stranded.

How to get out of a bases loaded with no outs jam: Presented by Yu Darvish. pic.twitter.com/Yvt6Irbvkg

B4: Ponce de Leon's start came to an end not long after Heyward, a former Cardinal, slugged his first triple of the season. Hammering a three-bagger into the right field corner, Heyward plated Willson Contreras, who previously drew a leadoff walk. Contreras was elated when he came all the way home from first, as he emphatically slid across the dish for no apparent reason at all. Bote struck out in the ensuing at-bat, which was followed by a pitching change. Seth Elledge came out of the bullpen and issued back-to-back walks before tabbing back-to-back strikeouts with the bases loaded.

The dugout was hyped on Heyward's triple! pic.twitter.com/MkyJYUCGOA

Try to have fun in everyday life the same way Willson Contreras has fun while playing baseball ?? pic.twitter.com/FSs3HhKlS9

T5: A two-out RBI single by Goldschmidt scored Wong from second base. Wong singled earlier in the inning and advanced to second on a groundout. Darvish struck Carpenter out to end the top half of the fifth.

B5: Javier Baez led off the bottom half of the fifth with a standup double hit to deep left-center. Schwarber proceeded to hit a rocket into the stands beyond right field. The two-run jack left the bat at 113 mph and carried 416 feet, marking Schwarber's fourth dinger of the year. Baez stood still and admired the long ball, knowing it was gone as soon as it left the bat. Ryan Meisinger came in to pitch and worked through the remainder of the frame. After Heyward was hit by a pitch, St. Louis turned an inning-ending 6-4-3 double play.

Javy is all of us watching Schwarber mash. pic.twitter.com/x2oJE1L4ou

T6: Darvish used just 11 pitches in a three up, three down sixth. Miller and Fowler both struck out swinging, and Carlson flied out.

B6: A two-out rally failed to culminated in runs being scored in the bottom of the sixth. A two-out walk of Happ was followed by a single off the bat of Rizzo that advanced Happ to third. Baez walked to load the bases, but reliever Jesus Cruz replaced Meisinger and bailed the Cards out by fanning Schwarber. The appearance by Cruz, who was called up earlier in the day, served as the right-hander's MLB debut.

B7: Heyward and Bote singled in consecutive bats off Cruz. With one out and men on first and third, Victor Caratini clubbed a double off the top of the right field wall that scored Heyward and moved Bote to third. Jason Kipnis ushered Bote across with a sacrifice fly, and a walk of Happ resulted in Nabil Crismatt entering to toe the rubber for St. Louis. Crismatt stopped the bleeding by forcing Rizzo to fly out, thus ending the inning.

T8: Dan Winkler replaced Sadler after the latter began the eighth by walking two batters. On the first pitch of his appearance, Winkler gave up an RBI single to Carpenter. Next, Miller walked to load the bases, but Carlson then grounded into a 5-6-3 double play. Goldschmidt scored on the third double play groundout suffered by St. Louis, and that proved to be the Cardinals' last run of the night. Winkler hit Fowler with a pitch that grazed his right hand and was subsequently relieved by Rowan Wick. On a 2-2 count, Andrew Knizner, who pinch hit for Wieters, watched a fastball thrown over the heart of the plate go by for a strikeout that left two stranded on base.

when you are playing MLB TheShow and your controller dies in the middle of an AB pic.twitter.com/S3mD5KegvV

B8: Crismatt breezed through the eighth, sitting the Cubs down in order on 10 pitches.

T9: Wick remained in to try for the four-out save. Max Schrock gifted Wick an auspicious start to the final inning by swinging at the first pitch of the frame and popping it up to the infield. Wong drew a walk thereafter, and Wick then struck Tommy Edman out swinging to cap off an eight-pitch at-bat. Due to fielder's indifference, Wong took second base during Edman's plate appearance, but he did not score, as Goldschmidt struck out swinging to end the contest.

Darvish earned the win to improve to 4-1, and Ponce de Leon, who was not aided by the Fountain of Youth in his short-lived outing, fell to 0-2 with the loss. Sadler was credited with his fourth hold of the summer, and Wick earned his fourth save of 2020.

Up Next: Like Monday's action, a doubleheader will take place at the Friendly Confines on Wednesday, Aug. 19. A light breeze will accompany clear, warm conditions in Chi-Town. The early seven-inning game, in which the Cubs will bat last, is set to begin at 1:20 p.m. CDT. Righty Alec Mills (2-1, 2.84) of the Cubs and righty Jack Flaherty (1-0, 2.57) of the Cardinals will face off on the mound.