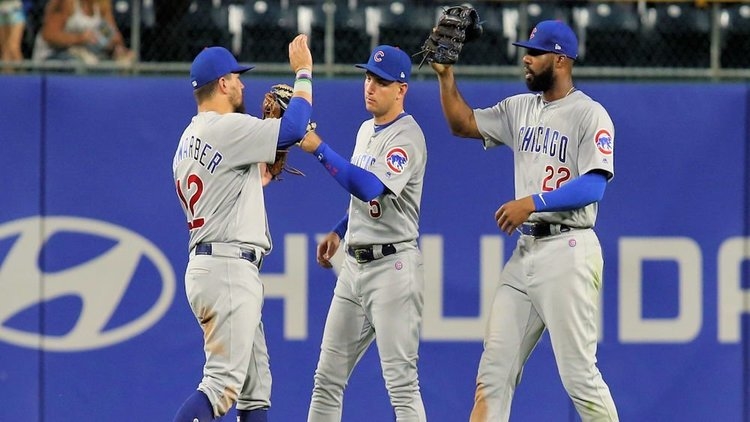 The Cubs’ pitchers and catchers hold their first spring workout on February 12th, with the full squad starting on February 17th. According to Bruce Miles, “Theo, Jed and Joe, er, David, likely to meet media Feb. 11.”

As per the the Cubs’ Press Release, this year appears to be full of entertainment for the attendees and from the looks of things, fans will have a chance to meet a plethora of players from today and the past.

You can see more info at https://t.co/KhO0vWYkYM. Here’s a rundown of current/former players planning on attending: pic.twitter.com/BetZIKuroI

Jon Lester will not be there due to a prior commitment, nor will Craig Kimbrel, as he’s dealing with a family medical issue.

Third base watch: Four things seem to be affecting Theo’s ability to trade Kris Bryant this winter: (1) A decision on his grievance (expected to come shortly); (2) Josh Donaldson remaining a free agent (with four known suitors); (3) Theo’s asking price (which is still outrageously high) and;

(4) the uncertainty of what the Rockies intend to do with Nolan Arenado (flip a coin).

Much like the Cubs, rumors go back and forth about Nolan Arenado being traded, but at some point, Donaldson will choose to sign, and the arbitrator will render a decision on KB’s grievance. I’d expect Theo Epstein to come down on his asking price for Bryant, but not so much that he ends up giving him away.

Keeping KB until the July trade deadline is another possibility, as, by that time, the decision on KB’s grievance will have been rendered, and there won’t be any free agent alternatives for other clubs to consider. Not that I would want to see Willson Contreras or Kyle Schwarber dealt, but the same could hold for them, concerning the July deadline.

Arbitration deadline: Today marks the deadline for teams and agents to exchange figures, before going to arbitration. The Cubs have seven players due for arbitration.

El Mago 2.0: The Cubs may also want to consider a future’s contract with Javy’s son. For a toddler, this kid has quite the (left-handed) swing and a corresponding bat flip in his repertoire. Go El Mago 2.0!

Baseball Quotes: “You know, catching the knuckleball, it's like trying to catch a fly with a chopstick.” -Jason Varitek

Brewers: According to an MLB Trade Rumors article from yesterday, “There has been a lot of turnover for the Brewers this winter, though it seems fair to say the approach has been one of seeking incremental, cost-efficient improvement. Certainly, there hasn’t been a marquee addition. The organization may or may not have something bigger up its sleeve, but it likely isn’t done making moves.”

GM David Stearns told reporters that he’d be “surprised” if he isn’t able to make any additional moves to shore up Milwaukee’s roster. The team did sign outfielder Logan Morrison and catcher Tuffy Gosewich to minor league deals on Thursday.

Cardinals: The Cardinals still remain interested in re-signing Marcell Ozuna, although talks haven’t progressed. The Red Birds are also in the running for Nolan Arenado, but it remains unclear as to whether they’ve exchanged proposed trade candidates.

The team did, however, swing a big trade yesterday.

The St. Louis Cardinals are trading OF Jose Martinez, OF Randy Arozarena and a Compensation A pick (after 1st round) to the Tampa Bay Rays for LHP prospect Matt Liberatore, a low-level catching prospect and Compensation B pick (post-2nd), sources familiar with the deal tell ESPN.

Pirates: Hey! Somebody finally woke up in the Pirates’ front office. Yesterday, the team signed free-agent outfielder, Guillermo Heredia, to a major league deal. Heredia is capable of playing left, right and center, and could help the Pirates’ decision to move Starling Marté.

On the other hand, Heredia’s batting average has declined yearly since coming to the majors in 2016, dropping from .250 to just .225 last year (231 plate appearances).

Reds: Even after signing Shogo Akiyama, Mike Moustakas, and other high-level players, Cincinnati is still “surely contemplating additions,” as per Jeff Todd of MLB Trade Rumors. The team is reported to be showing interest in Corey Seager.

#Reds have targeted one of the game's top shortstops https://t.co/YeD3bb7gNW pic.twitter.com/cOqeKnJnMc

White Sox: In the wake of the Edwin Encarnacion signing (one-year/$12M), the Sox have designated LHP Kodi Medeiros for assignment. Maybe the Cubs take a look? Medeiros is a former first-round draft pick (12th) in 2014, though he has struggled in Triple-A (Birmingham) the last two seasons.

- Yasmani Grandal played in each of the last five postseasons.

- Dallas Keuchel played in four of the last five postseasons.

- Edwin Encarnacion played in each of the last five postseasons.

Sox have injected an awful lot of winning experience into this roster this winter.

“They have a lot of great young hitters, and I am very close with Eloy Jimenez. I have known him since he was 14 years old” -Edwin Encarnacion on joining the Sox

Diamondbacks: It’s official. Arizona has signed RHP Héctor Rondón to a 1-year deal with a club option for 2021, and in turn, has designated RHP Jimmie Sherfy for assignment.