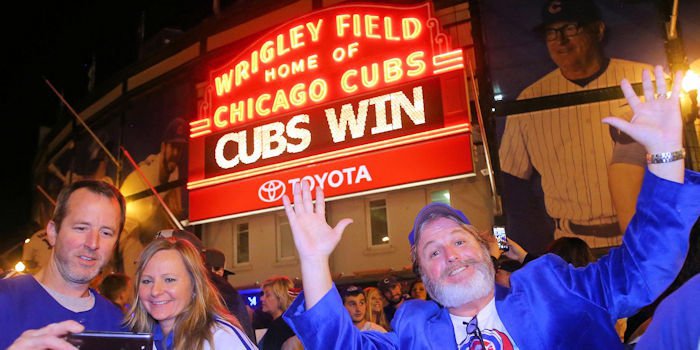 CHICAGO – The Chicago Cubs today announced the winners of the Championship Ring Bearer Fan Contest that provides 20 dedicated fans the opportunity to present Cubs players and coaches their 2016 World Series rings on the field during the team’s ring ceremony game Wednesday, April 12, at Wrigley Field.

The winners listed below were selected from more than 1,500 video nominations on Twitter using the #CubsRingBearer hashtag, which was shared more than 10,000 times overall. These fans were nominated by family members, coworkers and friends and selected based on their passion, loyalty and creativity according to the contest criteria. Winners range from 13 to 90 years old with inspiring stories including a young woman with spina bifida who plays baseball for her Miracle League Cubs team; two teachers with Cubs-themed classrooms, one whose students get extra credit if they find her brick paver outside Wrigley Field; a grandfather who saved a 1984 bottle of champagne for his championship toast; a father whose four kids have Cubs-themed names; a woman who overcomes cerebral palsy to frequently support her team in person; a veteran, cancer survivor and longtime bleacher season ticket holder who saved the newspaper from Ernie Banks’ debut to eventually have it signed by Mr. Cub himself; plus fans with remarkable Cubs wardrobes, decorations and memorabilia collections.

Winners traveling to Chicago for this once-in-a-lifetime experience will receive complimentary transportation, accommodations and two tickets to the April 12 ring ceremony game. These presenters will wear unique Majestic jerseys and New Era hats to match the players’ uniforms that day, and will be among the first fans to get a look at the Cubs World Series rings designed by Jostens.

The list of Championship Ring Bearers follows with original hometowns listed and links to their nomination videos. More information on each winner can be found at www.cubs.com/cubsringbearer.

“The greatest journey in sports history was backed by the greatest fans in all of sports, and we’re thrilled to reward 20 deserving people from that passionate group with this once-in-a-lifetime opportunity,” said Cubs President of Business Operations Crane Kenney. “We’re so thankful for our fans’ ongoing support as we built the foundation for our long-awaited championship. It will be rewarding to see our World Series rings presented to players and coaches by such an impressive group of fans.”

A cross-functional team of judges within the Cubs front office scored each eligible entry according to the submission requirements and official criteria. For more information and to read the official contest rules, please visit www.cubs.com/cubsringbearer.