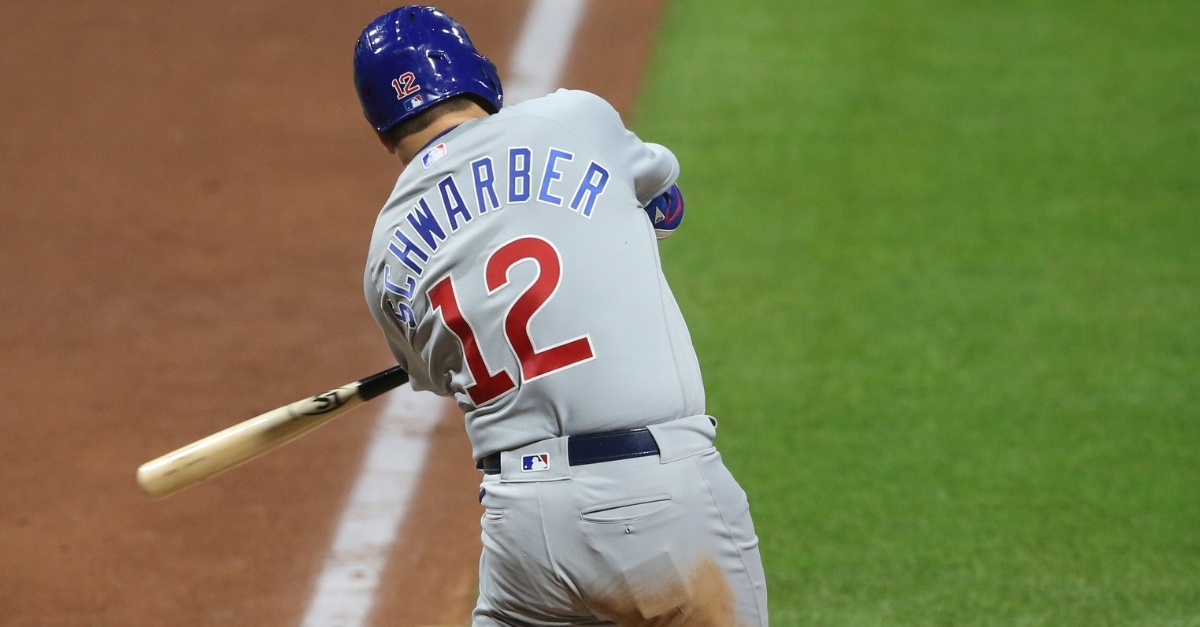 Kyle Schwarber responded quite emphatically after being benched on Sunday, as he hit two crucial doubles on Monday. (Credit: Charles LeClaire-USA TODAY Sports)

PITTSBURGH — After getting shut out in their previous contest, the Chicago Cubs (32-22) responded by earning a shutout win of their own on Monday. The North Siders defeated the Pittsburgh Pirates (15-39) 5-0 in the opener of a four-game series at PNC Park. Left-hander Jon Lester started on the mound for the Cubs and tossed six scoreless frames.

Left fielder Kyle Schwarber made the biggest impact of any Cub at the plate, going 2-for-4 with a pair of doubles. Schwarber drove home two runs and scored one run, redeeming himself after he was benched early in Sunday's game for not hustling to field a ball. The Pirates entered the contest having already been eliminated from postseason contention, and they did not put up much of a fight.

T1: Pittsburgh native Ian Happ has a knack for playing well in his hometown, and he started off the contest with a base knock. However, Anthony Rizzo then grounded into a double play.

B1: Lester worked a 1-2-3 inning his first time out. Shortstop Javier Baez made a great throw from the edge of the outfield grass to out the leadoff man.

T2: Schwarber hustled for a leadoff double, and he reached third on a groundout. With two away, Baez caught the Pirates off guard by laying down a bunt. The bunt was perfectly executed, with Baez reaching base without facing a throw and Schwarber scoring with ease.

Unfortunately, Kris Bryant was injured in his second-inning at-bat. The third baseman, who has dealt with several injury issues in recent years, whiffed at the first pitch thrown to him and winced in pain afterward. After being evaluated by a trainer, Bryant finished his at-bat, which resulted in a groundout, but was later removed from the game due to tightness in his right lower oblique.

B2: Two grounders and one popup made for a routine bottom of the second.

T3: JT Brubaker, who started on the hill for the Buccos, struck out a pair in a three up, three down top of the third.

B3: Lester continued to keep the Pirates off the bases by drawing three straight flyouts. David Bote took over for Bryant at third prior to the half-inning.

T4: Brubaker tallied two more strikeouts as he sat the Cubs down in order.

B4: Reynolds batted a leadoff single, and Ke'Bryan Hayes followed that with a base hit to shallow center. An ensuing ground ball resulted in a force out at third, and a groundout after that placed runners at second and third with two down. The Pirates remained scoreless, as Josh Bell flied out to leave both baserunners stranded.

T5: Jason Kipnis was hit by a pitch with two outs, and Caratini brought him home with an RBI double to right-center.

B5: Gregory Polanco drew a leadoff walk, but the inning ended with Baez tagging him out on a shift as part of a 6-3 double play.

T6: Chicago did not reach base in the sixth.

B6: Jose Osuna began the bottom of the sixth by hitting a single. He was then outed at second on a fielder's choice. Hayes recorded an infield hit that put runners on the corners, but Pittsburgh suffered another inning-ending double play when Erik Gonzalez hit a ground ball to Baez, sparking a 6-4-3 double play.

T7: Brubaker walked Jason Heyward with one out and was relieved with two outs. Austin Davis then toed the rubber and forced Kipnis to ground out on his second pitch.

B7: Appearing in a game for the first time in 11 days, Kyle Ryan tossed a scoreless seventh.

T8: A two-out single by Rizzo caused a pitching change that led to a two-out rally. Blake Cederlind wasted little time in throwing a wild pitch that allowed Rizzo to move up a base. He next walked Willson Contreras, which set up a two-run double by Schwarber. Schwarber's clutch two-bagger was walloped to center field, providing Chicago with two insurance runs. Billy Hamilton subsequently pinch ran for Schwarber, who was then seen in the dugout hugging manager David Ross, proving that no hard feelings existed over Sunday's benching. Schwarber was the lone Cub to collect multiple hits on the night.

Bote proceeded to club a broken-bat RBI single that plated Hamilton. Nick Tropeano replaced Cederlind after Heyward accrued a base hit that advanced Bote to third, and he struck Baez out swinging. All five of the Cubs' runs were scored with two outs.

B8: With Jeremy Jeffress pitching, the Pirates failed to put a man on base.

T9: Tropeano drew three consecutive outs in the ninth. Jose Martinez, who was called up on Sunday, lined out in the inning.

B9: Dan Winkler struck out the side, including Jared Oliva. Making his big league debut, Oliva pinch hit in the bottom of the ninth and struck out looking to end the game.

Lester picked up the win to move to 3-2 overall, and Brubaker was handed the loss, dropping him to 1-3 overall. Ryan notched his fourth hold of the season, and the Cubs improved to 6-1 against the Pirates this year, thereby guaranteeing Chicago a victory in the 10-game season series versus Pittsburgh. With six games remaining on their schedule, the North Siders stand 4 1/2 games clear of second place in the National League Central.

Up Next: On Tuesday, Sept. 22, the Cubs and the Pirates will engage in part two of their four-part series. The first day of fall will see Cubs lefty Jose Quintana (0-0, 6.00) return from the injured list and make his first start of the season on the mound against Pirates lefty Steven Brault (1-3, 4.04). Quintana battled injuries this summer and has made only two appearances in the 2020 campaign, both of which were relief spots. The weather forecast calls for clear, mild conditions throughout the night in the Steel City.