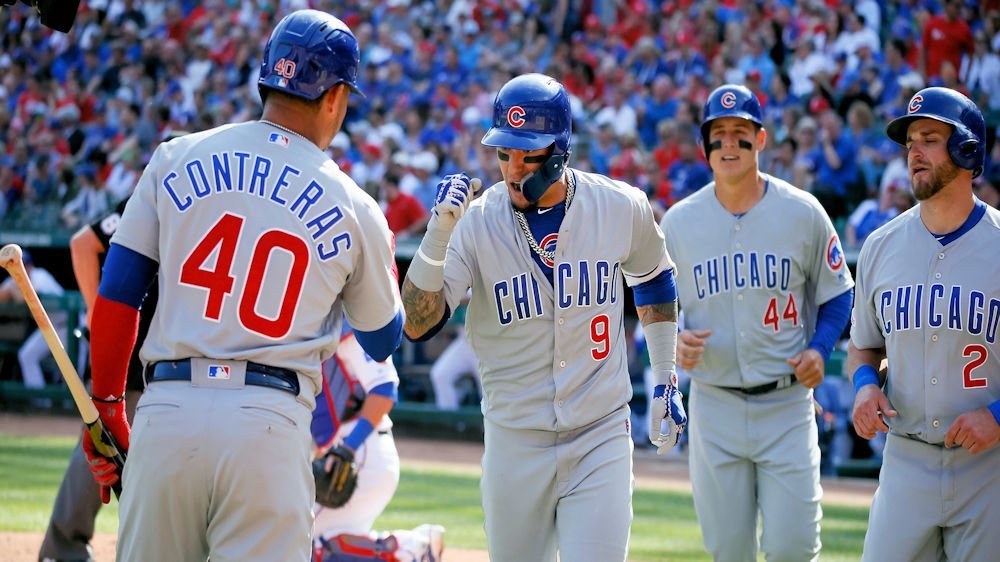 I enjoy doing this feature from week to week, especially as I see the Cubs continuing to improve. Since the last time that I calculated the stats and rankings, not a single Cub have failed to show improvement.

The offense continues to produce, the bullpen is tightening up, and the starters, for the most part, continue to dominate. The last time these stats were calculated, key players, such as Anthony Rizzo, had dipped below the .200 mark in terms of batting average, while starting pitchers and relievers, though improving, were still showing signs of struggles. 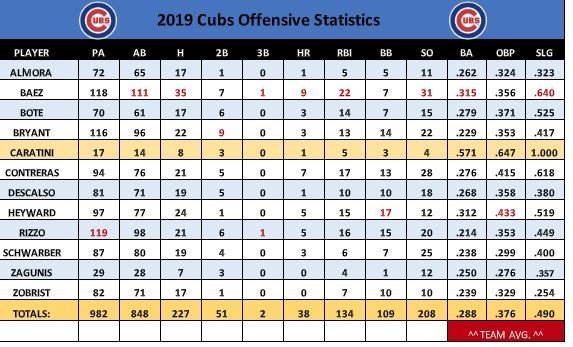 Javier Baez continues to lead the team in strikeouts (31), but with that, also comes complete domination in other vital stats. Baez currently leads the team in at-bats, hits, homers, RBI, batting average and slugging percentage. (Note: while Victor Caratini’s slash line of .571/.647/1.000 is the best, he has been factored out in this section, due to his limited playing time as the result of his hand injury.)

Surprisingly, Jason Heyward leads the team in walks with 17, but that has helped take the lead in OBP (.433). Heyward is having a breakout year, and his five homers at the end of April have almost matched his last year’s total of just 8. The big man also leads the club in stolen bases with four. Rizzo continues to be patient at the plate, already amassing 15 walks, which stands as second best this week.

As a team, the Cubs’ position and bench players are slashing .288/.376/.490, but even when factoring in the pitcher’s at-bats, the team ranks 6/2/7 among the 15 NL teams. Again, including the pitching staff’s at-bats, the Cubs currently rank fifth in runs produced, ninth in hits, fourth in doubles and eighth in homers.

Quick recap: Positive points per occurrence for hits, doubles, triples, homers, RBI, stolen bases, walks and sacrifices (flies/bunts). Negative points per occurrence for strikeouts and grounding into double plays. Every stat for each player is set proportionately to the stats of his teammates. Then individual factors are totaled, then added to, or subtracted from, the base score of 100, depending on whether the factor score is positive or negative. (I’ve changed the way that I calculate these, as the stats are now calculated per-9 innings, just as with a pitcher’s ERA. I have one more minor tweak to make next time I calculate them, which will make them even more defined in terms of rankings, but the stats will remain proportionate to one another). 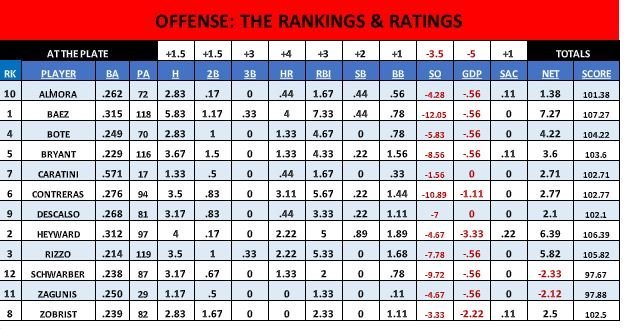 Javy regained the top offensive ranking, jumping from #5 to #1 this week, while the biggest fall in the rankings Daniel Descalso who went for #3 to #9. The Bryzzo duo each jumped tremendously with their recent hitting streaks, seeing Rizzo go from #7 to #3, and Bryant moving from #11 to #5. With Caratini shelved due to injury, he fell six spots to #7, while Ben Zobrist has maintained the #8 position since I started calculating the stats- the only player to have never moved up or down. 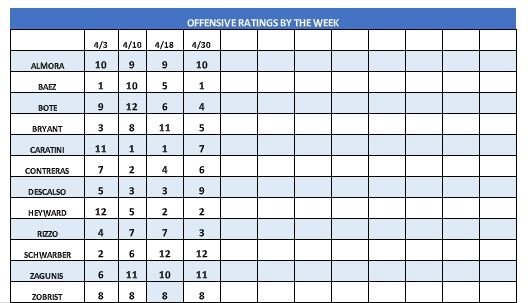 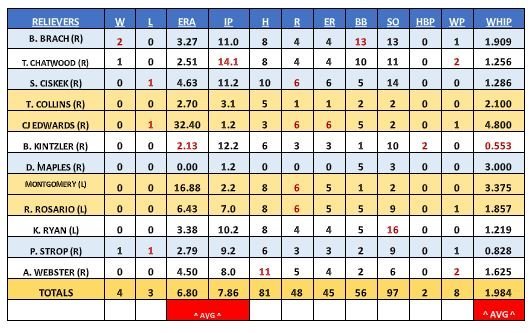 Although the strong continue to get stronger in the starting rotation, Yu Darvish is improving in small steps, while Kyle Hendricks is just plain languishing. Nothing the Professor seems to do is working, as batters continue to pummel him outing after outing. Darvish continues to struggle with his WHIP, but his ability to pitch himself out of jams has continued to lower his ERA, which is something that Hendricks is failing to do. Jon Lester, Cole Hamels, and Jose Quintana all continue to look sharp, although Quintana has surrendered a handful of runs in his last two outings. 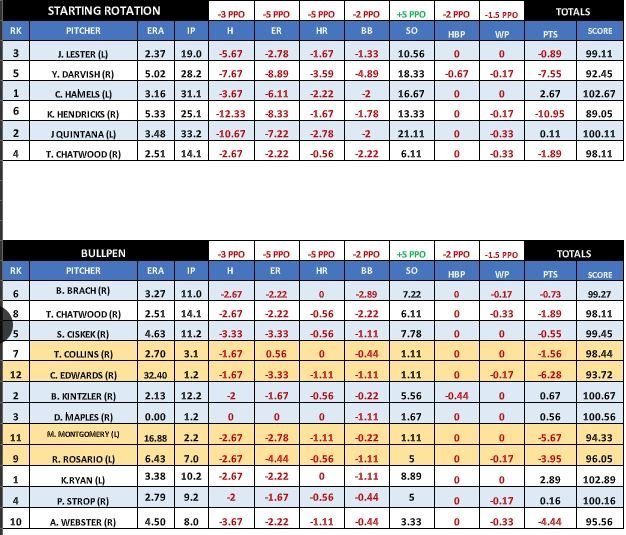 In terms of pitcher rankings for the starter, things have remained unchanged from the last time, except for Hamels and Q swapping places for the #1 and #2 spots. I expect the two them to battle back and forth for a good part of the season, with Jon Lester staying on the fringe of the #3 spot.

In the world of relievers, Tyler Chatwood gained another spot among the top-10, moving up to #8, while Allen Webster back-peddled from #3 to #10. For the most part, however, things remain relatively unchanged. 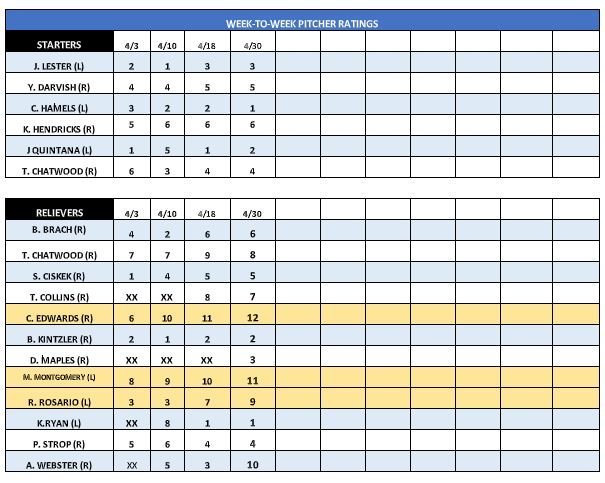 As the season wears on, the player’s individual, weekly contributions to the team are becoming more and more definitive. Is Jon Lester the guy to be the #1 starter? Who will emerge as the guy who should take on the closer role? Does Chatwood belong in the bullpen, or does his new-found control put him in a position to take over for one of the starters?

Stay tuned, another edition of my stats and rankings will be coming on May 13th- the Cubs’ next off-day following this week. As always, email me your feedback- ken@cubshq.com.