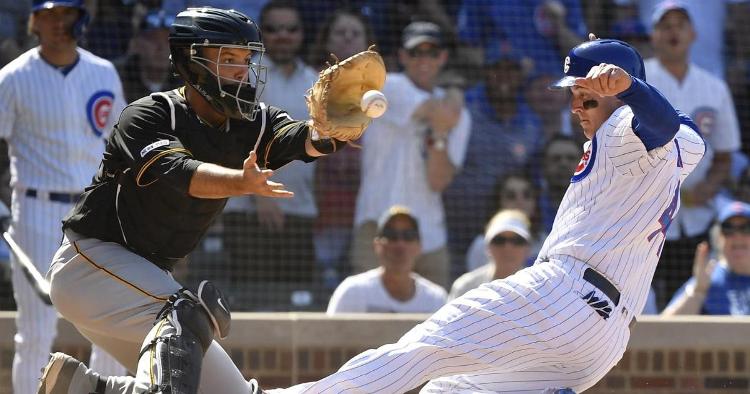 The Chicago Cubs scored a total of four runs in their final two offensive half-innings and collected the victory as a result. (Credit: Quinn Harris-USA TODAY Sports)

CHICAGO — Scoring two separate go-ahead runs after the seventh-inning stretch, the Chicago Cubs (48-43) broke a scoreless tie before blowing a lead and then going ahead again within a span of one inning. Battling the Pittsburgh Pirates (44-46) for the first time since the infamous Fourth of July game last week that saw Cubs manager Joe Maddon ejected for trying to go after Pirates manager Clint Hurdle, the Cubs came alive at the plate late in the game and survived in a 4-3 victory.

Offense was at a premium for most of the ballgame, with only two combined hits taking place in the first five innings. Cubs starter Yu Darvish and Pirates starter Chris Archer engaged in a pitching duel that ended in no-decisions for both of them. Still looking to earn his first winning decision at Wrigley Field, Darvish fanned eight and gave up just two hits and one walk in six innings of work. As for Archer, his only legitimate mistake came in the first at-bat of the bottom of the seventh, when Cubs third baseman Kris Bryant smacked a 368-foot home run to left field.

The go-ahead dinger marked Bryant's 18th long ball of the year, and it sparked a successful 3-run inning for the Cubs. After giving up a single and a walk following the homer, Archer was yanked from the contest. His replacement, Michael Feliz, was taken for a single by Cubs right fielder Jason Heyward to start off his stint on the mound. Thereafter, second baseman Robel Garcia drove home first baseman Anthony Rizzo with a sacrifice fly to right field. An ensuing single loaded the bases, and Feliz proceeded to walk in a run.

By forcing an inning-ending double play, the Pirates minimized the damage that they could have suffered after it seemed like the Cubs were on the verge of opening the proverbial floodgates, and the Buccos took advantage at the dish by erasing their 3-run deficit with one swing of the bat in the next inning. Cubs setup man Pedro Strop struggled in the eighth, as he gave up a double and walked a man before Pirates center fielder Starling Marte went yard off him. Crushing a 454-foot 3-run bomb out onto Waveland Avenue, Marte tied the game at 3-3 and ended Strop's disappointing outing.

Luckily for Strop, Pirates reliever Kyle Crick did not fare well in the eighth frame, either. Crick walked Bryant with one out and, a few plate appearances later, issued another walk to put Bryant in scoring position with two outs. Heyward did not waste the scoring opportunity, as he drove Bryant home with what proved to be the game-winning single. Bryant slid in ahead of the tag at the plate for his second go-ahead run of the day. Cubs closer Craig Kimbrel sat the Pirates down in order in the ninth and finished off the Cubs' 4-3 triumph, with an overturned call on a play at first base, on which Rizzo was somehow able to avoid being pulled off the bag while corralling a tough throw, putting an end to the battle.