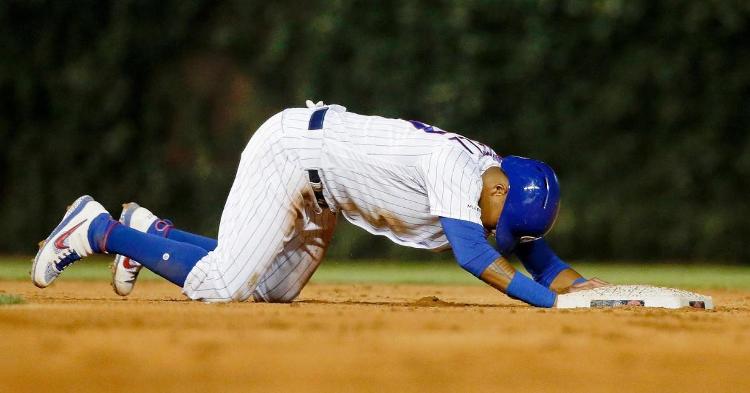 The Chicago Cubs cannot seem to catch a break when taking on the Cincinnati Reds. (Credit: Jon Durr-USA TODAY Sports)

CHICAGO — Dating back to last season, whenever the Chicago Cubs (50-44) play the Cincinnati Reds (43-48), they become the Lovable Losers. Seemingly cursed when facing off against the team formerly known as the Red Stockings, the Cubs suffered yet another sickening loss at the hands of the Reds on Monday. Falling to 3-7 in contests with the Reds this season, the Cubs committed two costly errors while getting outscored 5-0 over the course of the final four innings. The Cubs ultimately lost 6-3, opening the 3-game set at Wrigley Field with a frustrating loss.

The Reds scored their first three runs via solo shots, with the first two landing in the basket at the top of the wall. Making his second start since returning from a shoulder injury, Cubs hurler Kyle Hendricks pitched six innings of 2-run ball, in which he struck out five but gave up a pair of dingers. Eugenio Suarez kicked off the scoring action with a blast that descended into the basket in left-center in the top of the first. In the top of the sixth, Yasiel Puig hit a moonshot that sported plenty of hang time before finally falling into the left-field basket.

Geno is now hitting .459 against the Cubs this season! ??#BornToBaseball pic.twitter.com/0dNnNTMNPW

One word to describe this home run:

A much more emphatic home run put the Cubs on the scoreboard, with Kyle Schwarber hammering a 426-foot bomb to left-center in the bottom of the third that evened the score at 1-1. In the bottom of the fourth, the Cubs took the lead against Reds starter Luis Castillo. Kris Bryant drew a leadoff walk and was then advanced to third on a double by Anthony Rizzo. A few at-bats later, Bryant scored on an RBI groundout from Jason Heyward that put the Cubs in front. Then, after an ensuing walk was issued, Rizzo came home from third on a wild pitch, as he slid in safely ahead of a tag from Castillo.

Puig's aforementioned tater made the score 3-2 in favor of the North Siders, and soon afterward, the Cubs missed out on an opportunity to take control of the game. After loading the bases with one out in the bottom of the sixth, the Cubs struck out in back-to-back at-bats, leaving all three runners stranded. The Reds were given new life after that, and they took advantage by plating two runs in the top of the seventh and going up 4-3.

Not sure what's better, the pitch or the reaction? #LaPiedra | #BornToBaseball pic.twitter.com/ChqffbMxxZ

Cubs reliever Steve Cishek replaced Hendricks on the mound to start the seventh, and Curt Casali provided Cishek with a lukewarm welcome by taking him deep on the first pitch of Cishek's appearance. Not long after Casali's solo homer, Cubs shortstop Javier Baez suffered a rare fielding error that enabled the Reds to have men on first and second with no outs. Thereafter, Cubs third baseman David Bote took his turn at making a defensive mistake, as he allowed a hard-hit grounder to ricochet off his glove and into the outfield, thereby ushering the go-ahead run across.

Chicago pulled off an inning-ending double play to wrap up the top of the seventh, but serious damage had already been done. The Reds went on to tally a few insurance runs in the eighth inning, with Kyle Farmer hitting a 2-out RBI double that set up an RBI single off the bat of Michael Lorenzen. In the bottom half of the eighth, the Cubs sported baserunners on first and second with one out when Albert Almora Jr. lined into an inning-ending double play that included Addison Russell being doubled off at second. Going a miserable 1-for-11 with runners in scoring position on the night, the Cubs did not fare too well at the plate or in the field in the 6-3 loss, with their streak of misfortune in matchups with the Reds staying very much alive.