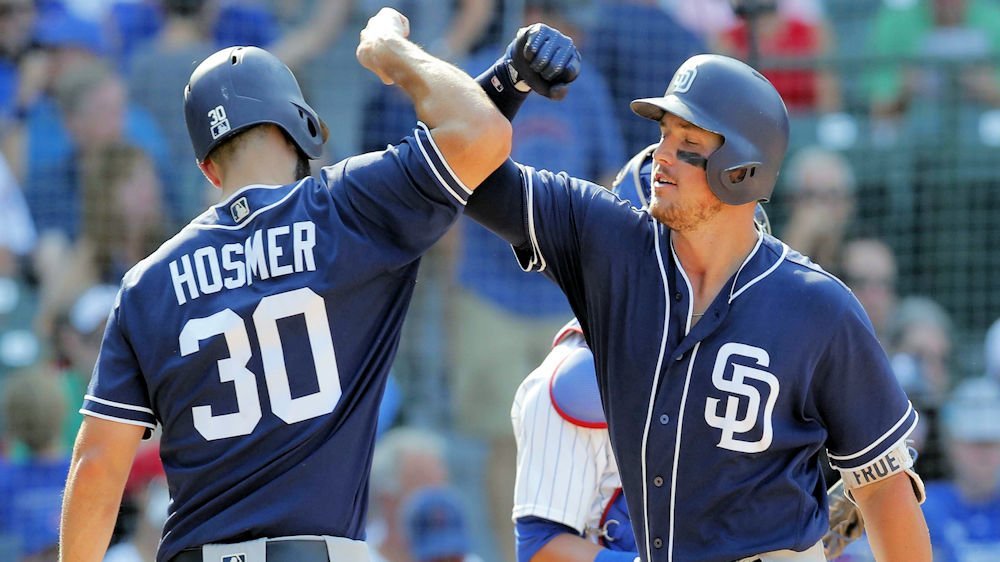 The Padres pounded out 15 hits against a Cubs pitching staff that failed to ever settle into a groove. (Photo Credit: Jim Young-USA TODAY Sports)

CHICAGO — Solid pitching was undoubtedly at a premium in the Chicago Cubs' series finale with the San Diego Padres on Sunday afternoon at Wrigley Field. With a combined 16 runs and 27 hits, the game featured an abundance of momentum swings, two-out rallies and clutch performances at the plate. Falling 10-6, the Cubs were able to overcome an early four-run deficit at the dish but were unable to settle down on the mound, which proved too costly for Chicago to manage.

Starting on the hill for the Cubs was lefty Jon Lester, who, quite frankly, has not been the Lester of old over the course of the past month or so. A Cy Young frontrunner in early July, Lester has struggled through several bad starts in recent weeks that have seriously hindered his Cy Young candidacy, and Sunday was no exception. Giving up five runs on two walks and eight hits, including two home runs, Lester was yanked after five innings and received a no-decision. Lester is winless since the All-Star break.

Padres starter Joey Lucchesi was not particularly great, either, as he was taken for three runs on seven hits in 5.2 innings pitched, but he struck out nine and avoided making grave mistakes. The key to the game, however, was the contrast in bullpen performances. One day after putting together a marvelous bullpen showing, Cubs relief pitching gave up five runs and ultimately lost the game for Chicago.

The top of the Padres' batting order dominated on the afternoon and contributed heavily to San Diego tagging Lester for four runs in the first two innings. In the first frame, leadoff man Manuel Margot put the Padres on the board by hitting a single, advancing to second on a fielder's choice, taking third on a wild pitch and coming home on sacrifice fly.

Shortstop Freddy Galvis wasted no time in increasing San Diego's lead in the next inning, as he led off with a solo shot just over the wall in left. Later in the inning, first baseman Eric Hosmer, who went 3-5 with the bat, hit a clutch two-out triple that sailed past a diving Albert Almora, Jr., in center field and plated two runs.

With that kind of location, @freddygalvis10 should've yelled "FORE!" after hitting this long drive ?? pic.twitter.com/oRbKpJjWkT

Leading 4-0 after that, the Padres gave up their first run in the bottom of the third on a solo jack from Javier Baez. The dinger provided the Cubs' second baseman with his 24th homer of the year, a new career high, on the four-year anniversary of his big-league debut.

Franmil Reyes responded at the start of the fourth by swatting a 477-foot moonshot off Lester. Only a day removed from being called up from the minors, Reyes hit the fifth-longest home run in the majors, as well as the longest hit at the Friendly Confines, this season. The Cubs tacked on two runs to make it 5-3 in the fifth. Sparked by pinch hitter Tommy La Stella drawing a catcher's interference, which he is famously good at doing, the Cubs experienced a successful inning that ended in a deflating fashion.

About that @La_Mole_13 ??:
— Longest HR at Wrigley Field this season
— 5th longest HR of the season (per @statcast)
— Really awesome pic.twitter.com/tcejNwHzR4

After La Stella took first, Almora, Jr., batted a single to left-center that Padres outfielder Hunter Renfroe fielded. Renfroe proceeded to make an errant throw back into the infield, which enabled La Stella to score and Almora, Jr., to reach third. Baez followed that up with a blooped double to left that brought Almora, Jr., home. Baez went 2-5 with two RBI on the day.

However, Baez's good fortune ended soon afterward, as he was ruled out on attempted steal following a Padres challenge. Initially called safe on a steal of third, Baez was ruled to have been tagged out after the umpires reviewed the play, which ended the inning, as well as the Cubs' rally. The next inning ended in a similar fashion for the Cubs, with third baseman David Bote getting picked off at second base for the third out of the frame.

In the bottom of the seventh, the Cubs used four singles to tie the game at 5-5. With one out, Ben Zobrist, Ian Happ and Almora, Jr., each hit a one-out single off Padres reliever Jose Castillo. Almora, Jr.'s, one-bagger scored Zobrist to make the score 5-4. With two outs and reliever Craig Stammen on the hill, Cubs slugger Anthony Rizzo came on in a pinch-hitting spot and produced. Fighting off a pitch for an opposite-field single, Rizzo drove Happ home to knot the game up and incite a raucous reaction from the Wrigley faithful.

I’m not sure this does it justice...but take a listen to the Wrigley crowd. #Cubs pic.twitter.com/szCLfc03z3

The Cubs' momentum dissipated in the top half of the eighth, as relief pitcher Carl Edwards, Jr., allowed the Padres to take the lead with two outs. Edwards, Jr., issued a two-out walk to Travis Jankowski, who then stole second. After that, Cory Spangenberg clubbed a double to right-center that scored Jankowski with ease and regained the lead for San Diego.

Chicago then went three up, three down in the bottom of the eighth, which set the stage for a four-run explosion by the Padres in the ninth. Giving up the four runs on four hits and two walks, Cubs reliever Randy Rosario, who was recently sent down to the minors only to be called back up not long afterward, suffered a disastrous inning. Renfroe redeemed himself for his error earlier in the game by hitting a two-run home run. Four at-bats later, Jankowski collected a two-run single with two outs to essentially close the book on the Cubs.

The confines were quite friendly to our bats in the 9th inning of this #PadresWin! ?? pic.twitter.com/t4uFhmGu8U

Zobrist hit an impressive solo home run in the bottom of the ninth that hit off the video board, but it proved to be essentially meaningless. Jason Heyward attempted to spark a rally after he tabbed a one-out walk by taking second on a fielder's indifference and then stealing third. But Rizzo got rung up for the final out on a suspect strike call of an outside pitch, which left Heyward stranded at third, and the Cubs lost 10-6.

HORRENDOUS MLB umpire #AngelHernandez waits until the very last pitch to make the game all about him, as he so often does, and K's @ARizzo44 on a ball two feet outside to end the ballgame. @Cubs #GoCubsGo pic.twitter.com/6WBolpZ0kk

Although the Cubs (64-47) amassed 12 hits, they also gave up 15 hits, as well as five walks, to a Padres (44-70) squad that destroyed the North Siders at the plate from start to finish. Failing to secure a series victory by way of Sunday's loss, the Cubs split the four-game set with the Padres. Edwards, Jr., was handed the loss to drop to 3-2, and Stammen, despite blowing a potential save, was credited with the win to improve to 5-1.