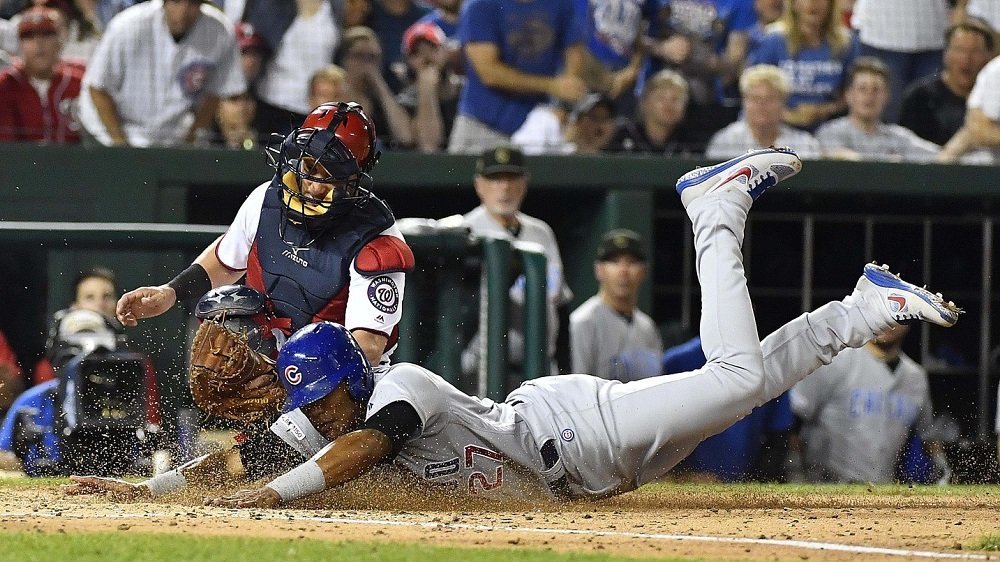 The Cubs were never able to seriously threaten the Nationals in the 5-2 Chicago defeat. (Credit: Brad Mills-USA TODAY Sports)

WASHINGTON, D.C. — In the opener of the 3-game series at Nationals Park between the Chicago Cubs (26-17) and the Washington Nationals (19-26), the Cubs hit six home runs and tallied 18 total hits in a 14-6 rout of the Nats. Clearly, the Cubs experienced an offensive hangover after that because game two on Saturday saw the North Siders manufacture a mere two runs and four hits. Led by starting pitcher Stephen Strasburg, the Nationals won 5-2 to even the series at one win apiece ahead of Sunday's rubber match.

Strasburg produced a superb 8-inning stint on the mound, in which he struck out seven and was taken for just four hits. His counterpart, Jon Lester, was not so fortunate, as he was racked for five runs on 10 hits in 4 1/3 innings of work. In his previous five starts, Lester gave up four runs combined. Lester's first major mistake came when he gave up a solo jack to Brian Dozier to lead off the bottom of the second. In the next inning, Lester was taken for back-to-back doubles by Howie Kendrick and Juan Soto, respectively, to put the Cubs into a 4-0 hole.

This is a video of Brian Dozier's 6th HR of the season.

The Cubs were able to get a run on the board in the top of the fifth because of miscommunication between Strasburg and Nationals catcher Yan Gomes. The battery seemed to not be on the same page about some of the pitch signals, resulting in two passed balls. The first passed ball enabled Jason Heyward and Addison Russell to advance a base. The second one allowed Heyward to score and compelled Russell to round third and attempt to score. Russell was thrown out at home, though, leaving the Cubs' deficit at three. Soto picked up another RBI in the bottom half of the fifth, thanks to a single that scored Anthony Rendon, who led off with a double.

The top of the sixth saw Cubs third baseman David Bote hammer a 389-foot solo jack to left-center on the first pitch of the inning. Bote went 0-for-4 in both of his previous two starts, so the dinger marked the ending of a slump. On the flip side, a couple of Bote's teammates saw positive streaks end on the night. Kris Bryant had his MLB-leading on-base streak stop at 26 games, while Javier Baez's MLB-leading hitting streak came to a close at 15 games.

Interestingly, the Cubs finished the contest under protest, as manager Joe Maddon protested Nationals closer Sean Doolittle's delivery in the ninth inning. Maddon complained to the umpires that Doolittle's windup was illegal, but his objection was ignored. After Bote's homer, the Cubs failed to accrue a single base runner, culminating in a comfortable 5-2 victory for the Nationals.