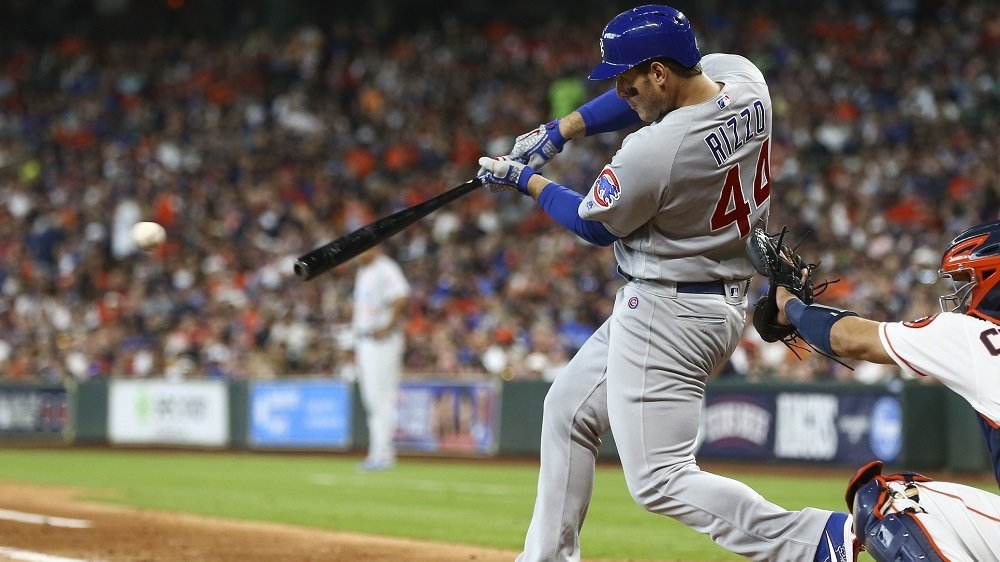 HOUSTON, Texas — A late home-run surge provided the Chicago Cubs (30-22) with a glimmer of hope against the Houston Astros (36-19) in Monday's Memorial Day matchup at Minute Maid Park, but it proved to be too little, too late for the North Siders, who fell 6-5 in the series opener against the Astros. The clash between the former National League Central foes was largely dominated by the home team, but the Cubs hit a pair of solo jacks off closer Roberto Osuna in the top of the ninth to make things interesting.

The Cubs boasted an early 2-0 lead in the interleague affair, as first baseman Anthony Rizzo jacked a 2-run blast in the opening inning. The 427-foot bomb marked the 15th dinger of the year for Rizzo, making it the first instance in his career that Rizzo hit his 15th homer prior to June. Left fielder Kyle Schwarber led off the game by drawing a walk and was plated on Rizzo's home run. After getting taken deep, Astros ace Gerrit Cole settled down and pitched a 6-inning gem, in which he struck out 12 and gave up just three hits.

Starting on the mound for the Cubs was Cole Hamels, who, interestingly enough faced off against another starting pitcher named Cole for the second straight outing. In his previous start, Hamels dueled Philadelphia Phillies hurler Cole Irvin, and, on Monday, he went toe to toe against a pitcher with Cole as his surname. Hamels certainly did not show up his similarly named adversary, as he was taken for six runs on seven hits and four walks in a woeful 4-inning appearance. Hamels' worst inning came in the third, when the Astros pushed five runs across on four hits and two walks and took a 6-2 lead.

With former Cubs reliever Hector Rondon toeing the rubber for the Astros in the seventh, the Cubs gained new life at the plate when a grounder hit by center fielder Albert Almora Jr. skirted under Houston third baseman Yuli Gurriel's glove and into the outfield, enabling Almora to reach second base. A few at-bats later, with two outs and runners on the corners, Cubs third baseman David Bote tallied an RBI infield single that brought Almora in to score and led to a pitching change.

Arguably the most important play of the game occurred in the next plate appearance, as Astros first baseman Tyler White made an impeccable lunging grab of a hard-hit liner off the bat of Schwarber to rob Schwarber of what would have likely been a 2-run extra-base hit down the right-field line. The catch by White was made all the more important when Almora and Cubs shortstop Addison Russell, who went 3-for-4 at the dish, clubbed a solo jack apiece off Osuna in the top of the ninth.

Almora led off the frame with a 388-foot round-tripper to left, and, with one out, Russell went yard on a 398-foot moonshot to left-center. Bote followed up Russell's homer with a single that ushered the potential winning run to the plate, but Osuna gathered himself and fanned Schwarber and designated hitter Javier Baez, who struck out in all five of his at-bats on the afternoon, to finish off the 6-5 Houston win.

On the injury front, Chicago slugger Kris Bryant missed the contest after suffering an upper-body injury on Sunday that was the result of a collision in the outfield. Also, Cubs reliever Mike Montgomery exited Monday's game without throwing a single pitch, as the left-hander experienced discomfort in his left middle finger after trotting onto the field prior to the start of the bottom of the sixth and was immediately removed before he even had the chance to toss a warm-up pitch.