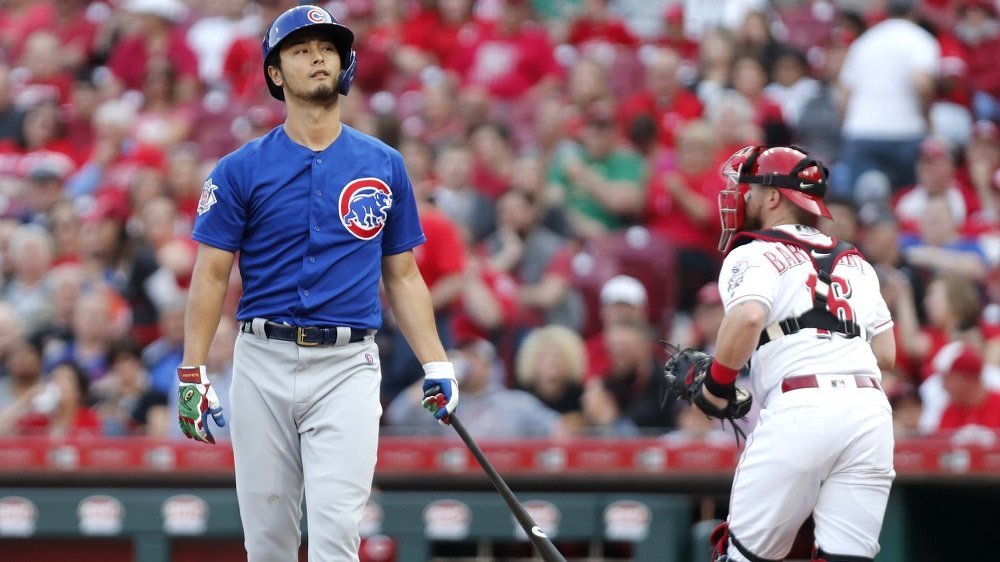 CINCINNATI, Ohio — A combination of a reliever who has struggled mightily this season and a certified Cub killer proved to be a detrimental mixture for the Chicago Cubs (25-15) against the Cincinnati Reds (19-24) at Great American Ball Park on Wednesday. With Carl Edwards Jr. on the mound and Eugenio Suarez at the dish with a runner on base and the Reds trailing by two in the eighth, Suarez came through like he has done time and time again against the Cubs with a game-tying 2-run blast off Edwards, whose late-game struggles continued. The Reds went on to defeat the Cubs 6-5 in 10 innings, marking the first extra-innings loss of the season for the North Siders.

Suarez went 3-for-5 with three RBI on the night, as the Reds overcame a 3-homer performance by the Cubs. Suarez provided Cincinnati with an early lead by collecting an RBI double off Cubs starter Yu Darvish in the opening inning. Darvish struck out 11 in his first double-digit strikeout performance of his Cubs stint but was pulled after 5 1/3 innings with 102 pitches under his belt. Cubs second baseman Addison Russell was quick to one-up Suarez with a 2-run jack in the top of the second, marking his first dinger since last June. The 408-foot no-doubter to straightaway center field plated center fielder Albert Almora Jr., who notched a 2-out single in the preceding at-bat.

Almora came up with another crucial 2-out hit in the fourth frame when he drilled a solo shot to left for his third round-tripper of 2019. The 391-footer put the Cubs ahead 3-1. The clutch hitting with two outs continued in the bottom half of the inning, with Jose Iglesias of the Reds smacking a 2-out double to right that scored Derek Dietrich. After the Cubs went back up by two, thanks to a sacrifice fly from Daniel Descalso that ushered Russell home in the top of the seventh, Iglesias went yard to lead off the bottom of the seventh.

The back-and-forth nature of the contest carried over into the eighth, as Cubs slugger and Ohio native Kyle Schwarber homered for the ninth time in his career while playing in his home state. The 392-foot solo jack made the score 5-3 and provided Schwarber with his fifth home run of the year, but, following a single by Reds first baseman Joey Votto to start the bottom half of the eighth, Suarez evened the score with the aforementioned game-tying yard ball soon after Edwards took the mound.

The Cubs accrued a few more 2-out hits in extras, with Kris Bryant and Javier Baez connecting on back-to-back singles with two outs. Interestingly, the singles extended different offensive streaks for both players. Bryant saw his MLB-leading on-base streak extended to 24 games, while Baez's career-best hitting streak increased to 13 games. Unfortunately for Chicago, Willson Contreras grounded out to end the half-inning and leave both runners stranded.

Cubs reliever Brad Brach did not fare well in the bottom of the 10th. After walking Votto with one out, Brach gave up a base knock to none other than Suarez. Votto reached third base on the single, but he could have potentially been tagged out, if Cubs third baseman David Bote had been able to cleanly field a throw from Bryant in left field. Following an intentional walk, Brach gave up the losing hit to Reds right fielder Yasiel Puig, who carried out his trademark bat licking right before nailing a pitch off the wall in center field to score Votto for a walk-off 6-5 victory for the Reds.