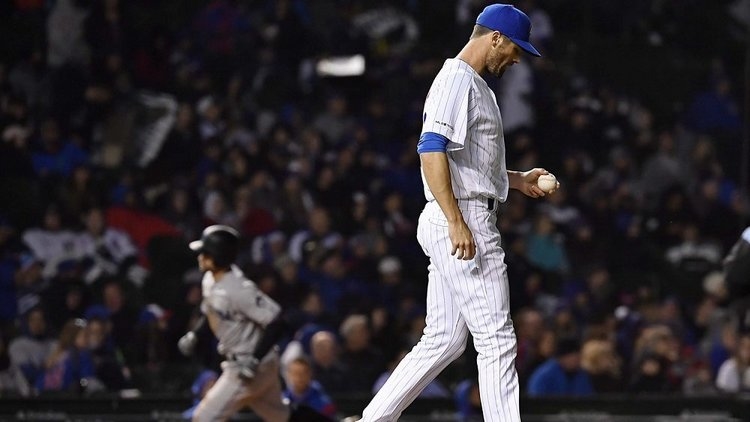 The Miami Marlins slowly chipped away at the Chicago Cubs after falling into an early 3-run hole. (Credit: Quinn Harris-USA TODAY Sports)

CHICAGO, Ill. — Even with unusually frigid conditions for the month of May working to their advantage with the Miami Marlins (10-24) visiting from tropical South Florida, the Chicago Cubs (19-13) were unable to take care of business at Wrigley Field on Monday. More specifically, the Cubs were unable to finish the job, with closer Pedro Strop getting charged with three runs in the ninth for a blown save that led to a 6-5 Cubs loss. After entering the contest boasting a 7-game winning streak, the Cubs exited having lost to the team with the worst record in baseball.

The game had all of the makings of a blowout victory for the Cubs early on, with Chicago scoring three runs in the opening frame. Cubs first baseman Anthony Rizzo put the Cubs up 2-0 by way of his 200th career home run, as he cranked a 410-foot blast that scored leadoff man Ben Zobrist and moved Rizzo into ninth place on the Cubs' all-time home-run leaderboard. Shortstop Javier Baez followed that up with a double, and catcher Willson Contreras then scored Baez with an RBI single.

Lefty Cole Hamels toed the rubber for the Cubs on the night, and he gave up three runs while striking out seven in six innings of work. A double from Brian Anderson and a sacrifice fly by former Cub Starlin Castro provided the Marlins with a pair of runs in the top of the third. Hamels went on to give up Jon Berti's first home run of the season, with the solo shot in the sixth knotting the game up at 3-3.

The Cubs had a golden opportunity to open the floodgates after loading the bases with no outs in the bottom of the sixth. However, they were able to muster just one run out of it. An infield single from left fielder Kyle Schwarber brought Contreras in to score, but a pair of groundouts, including an inning-ending double-play groundout, followed. Chicago went 2-for-7 with runners in scoring position.

That paved the way for Strop to give up the lead in the ninth with his second blown save of the season. Strop walked in the tying run before being pulled without recording a single out. After that, reliever Kyle Ryan entered and allowed two more runs to score on consecutive grounders. Leading 6-4 at that point, the Fish were able to hang on, despite Cubs third baseman Kris Bryant hammering a home run out onto Waveland Avenue in the bottom of the ninth. Overcoming an early 3-run deficit, Miami braved the cold and toppled the North Siders 6-5.