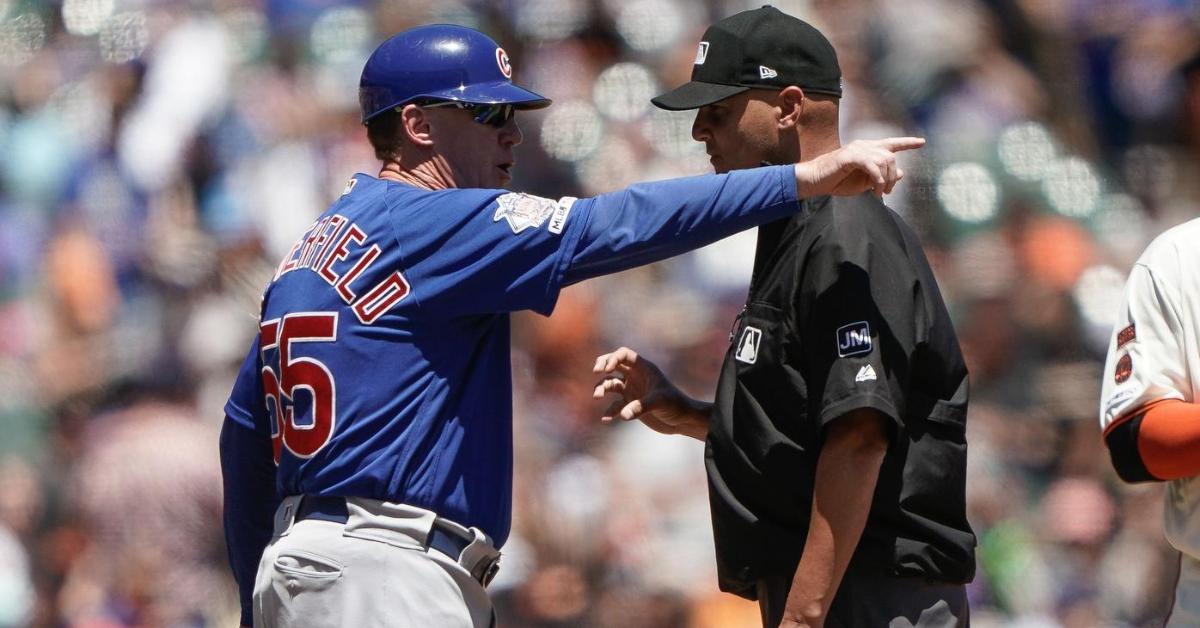 SAN FRANCISCO — Standing strong in the face of adversity, the Chicago Cubs (55-47) came out on top against the San Francisco Giants (52-51) on a day that was jam-packed with drama surrounding the Cubs organization. In Wednesday afternoon's series finale at Oracle Park, the Cubs scored four runs via three home runs and tallied a hard-fought win after having two of their star players exit the game under unideal circumstances. The North Siders topped the Giants 4-1 in the final installment of the 3-game set, thereby avoiding being swept.

Prior to the game, the Cubs announced that starting second baseman Addison Russell had been demoted to Triple-A in order to make room on the roster for starting catcher Willson Contreras, who returned from a brief stint on the injured list, and give Russell an opportunity to return to form following his recent on-field struggles. As if that was not dramatic enough, more personnel turbulence occurred for the Cubs during the game, with starting first baseman Anthony Rizzo getting ejected for arguing balls and strikes and starting third baseman Kris Bryant leaving the contest due to injury.

Cubs shortstop Javier Baez provided his club with an auspicious start by going yard in the top of the first. By smacking a 411-foot jack to left, Baez reached the 25-homer mark for the second straight season. Baez remained hot with the bat in his next plate appearance, as he cranked a ground-rule double to deep right-center. Initially, the hit seemed to result in a triple for Baez, who was sent back to second base when the umpires decided that the baseball should have been declared dead when it became lodged underneath a gate at the outfield wall.

Although the play very clearly should have been blown dead as soon as the ball became lodged underneath the gate, Cubs manager Joe Maddon was unhappy about the ruling because a Giants outfielder picked up the ball and threw it back into the infield before the hit was decreed a ground-rule double by the umpires. However, Bryant made up for it by taking Giants starting pitcher Tyler Beede deep in the very next at-bat. Skying a 391-footer out beyond center field, Bryant tabbed his 21st long ball of the year on a 2-run shot that pushed Baez across and put the Cubs up 3-0.

Meanwhile, adding to the adversity, Cubs hurler Jon Lester was unable to make his scheduled start due to a bout with bronchitis, so long reliever Tyler Chatwood was forced to start on short notice in Lester's place. With that being said, Chatwood fared well in his four innings of work, as he gave up just one run and one walk while striking out five. As for Beede, he struck out seven in 5 2/3 innings pitched but was racked for 10 of Chicago's' 11 hits and all four of the Cubs' runs.

A 2-out RBI single hit by Giants catcher Stephen Vogt in the bottom of the third proved to be San Francisco's lone scoring play of the matchup, as the Giants went 1-for-8 with runners in scoring position and left nine men stranded on base. In the top of the fourth, Cubs center fielder Albert Almora Jr. made up for Vogt's RBI by jacking the third home run of the day for the Cubs. The 389-footer barely eclipsed the wall in left and served as Almora's 10th round-tripper of 2019.

The Cubs led 4-1 following Almora's bomb, which culminated in the eventual 4-1 final tally. Despite the fact that it did not produce any runs, the top of the fifth was arguably the most significant half-inning of the game for the Cubs, with two strikeouts, in particular, coming with noteworthy ramifications. Chicago went down in order in the fifth, as Baez flied out before Bryant and Rizzo struck out in back-to-back at-bats. Both strikeouts ended in disheartening fashion, though, and resulted in Bryant and Rizzo exiting the contest.

Bryant winced in pain after swinging and missing at strike three and left the game as a result of what was later revealed to be right-knee soreness. A few minutes later, Rizzo struck out swinging for the third out and was ejected between innings. Evidently, prior to whiffing at strike three, Rizzo took umbrage with a questionable strike call that could have easily been called a walk-inducing ball four. Rizzo proceeded to let home-plate umpire Jordan Baker know how he felt about the call before heading back to the dugout, and Baker threw Rizzo out of the game because of it.

More coming on this... but it appears Kris Bryant was wincing after this last swing pic.twitter.com/wKAxmHecmy

In the top of the sixth, the Cubs wasted a bases-loaded opportunity, but it did not come back to bite them, as the Giants failed to record a run the rest of the way. San Francisco notched consecutive 2-out singles off Cubs closer Craig Kimbrel in the bottom of the ninth, but Giants first baseman Brandon Belt flied out to deep left to end the game. A tumultuous day for the Cubs was assuredly assuaged a bit by a much-needed win, with the Cubs defeating the Giants 4-1 to snap a 3-game losing skid and victoriously cap off their last West Coast series until early September.