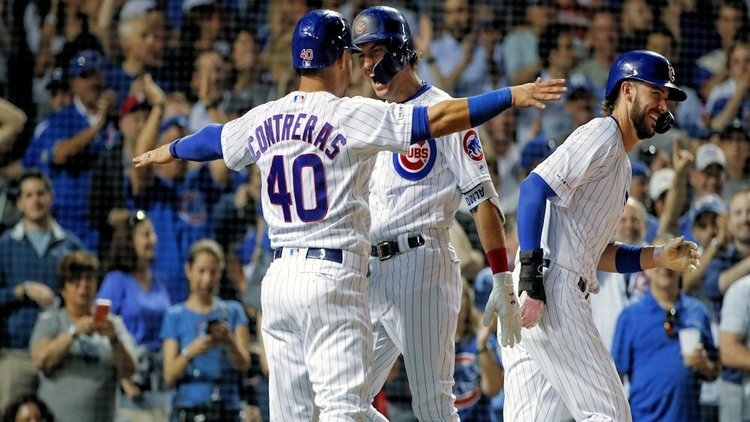 All three of the Cubs' home runs on Wednesday were quite impressive. (Credit: Kamil Krzaczynski-USA TODAY Sports)

CHICAGO, Ill. — Three emphatic swings of the bat was all that the Chicago Cubs (29-18) needed to take care of business against the Philadelphia Phillies (28-21) on Wednesday. With three gargantuan home runs, the Cubs overcame a 3-0 deficit and won 8-4 to improve to 2-1 through three installments of the 4-game set at Wrigley Field. Although Chicago hurler Cole Hamels did not last particularly long on the hill in his first career start against Philadelphia, the team with which he spent the first 10 seasons of his career, the Cubs outscored the Phillies 8-1 from the bottom of the third on and saved Hamels from picking up the loss.

J.T. Realmuto put the Phillies on the scoreboard with an RBI ground-rule double in the top of the first that landed in the ivy clinging to the wall in right-center. Hamels lucked out because two runs would have scored had the ball not been lost in the vegetation, which resulted in the play being blown dead. In the top of the third, Hamels was not so lucky, as the Phillies tagged him for two runs on four hits, including a leadoff double by Jean Segura. Also in the third frame, Phillies slugger Bryce Harper accrued his first hit of the series on a bunt single.

Facing off against Hamels on the mound was another Cole, as rookie Cole Irvin started for the Phillies as part of the first-ever MLB contest featuring two starting pitchers named Cole. Irvin pitched well until the bottom of the third, when Anthony Rizzo hammered a 3-run moonshot off him. The meteoric 437-foot blast clanked off the Budweiser sign atop the scoreboard beyond right field, thereby serving as one of the most impressive dingers of Rizzo's career.

With two outs and the bases loaded in the bottom of the fifth, Albert Almora Jr. had his turn in going yard off Irvin. Marking the first grand slam of Almora's big-league tenure, the 419-foot long ball sailed out to center field, providing the Cubs with a 7-3 lead and chasing Irvin from the game. Kris Bryant, who went 2-4 on the night, tabbed a 1-out double earlier in the inning, and the Cubs drew a pair of walks after that to set up the grand slam.

The final home run of the evening for the Cubs was a solo tater drilled 449 feet into the center-field bleachers by Javier Baez. Fresh off his pinch-hitting heroics in Tuesday's win, Baez proved that he is recuperated from his recent heel injury by swatting a beastly jack that put the Cubs ahead 8-3 in the bottom of the seventh. Baez knew that the ball was gone as soon as it left the bat, and he was fired up as he began his trot around the bases.

Andrew McCutchen answered Baez's solo homer with one of his own in the top of the eighth, which proved to be the only conspicuous blemish of Cubs pitcher Tyler Chatwood's four innings of relief. The Phillies trailed 8-4 after McCutchen's bomb, and they proceeded to advance a couple of runners into scoring position as part of a last-ditch effort in the top of the ninth. However, Cubs reliever Steve Cishek finished them off and put a stamp on the Cubs' 8-4 triumph.