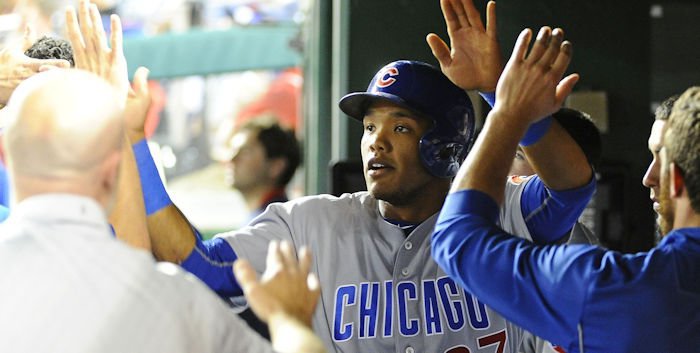 There were plenty of high fives all around in the Cubs' dugout on Thursday, as a total team effort was utilized in the blowout win.

MIAMI – The Chicago Cubs must have been embarrassed by their putrid offensive showing from Wednesday's 3-2 loss to the San Diego Padres, in which the North Siders accrued a measly two hits, because Thursday's performance by the Cubs was like that of the Murderers' Row New York Yankees from the 1920s. Crushing the Miami Marlins 11-1, the Cubs left no stone unturned (and no bat unswung) on their path to complete and total annihilation of the Marlins.

Interestingly enough, the offensive clinic put on by Chicago was sparked by an infield single from starting pitcher Jake Arrieta, who is known for his hitting prowess as a pitcher. Arrieta's infield hit in the second inning scored shortstop Addison Russell and put the Cubs on the board. After that, new Cubs call-up Mark Zagunis, who started in right field tonight, brought home second baseman Ian Happ on an RBI groundout. Zagunis also stole a base in the Chicago win, making his MLB debut a solid performance overall.

Marlins left fielder Marcell Ozuna cut the Cubs' 2-0 lead in half in the bottom of the second with a solo homer, Arrieta's only blemish of the evening, but that proved to be Miami's only batting highlight of the game. Arrieta was marvelous on the hill, producing one of his best starts of the season by going seven innings and giving up one run on six hits. Arrieta, who is known for his characteristically high pitch counts, was in command of his pitches all night long, throwing only 82 of them in seven innings.

Plus two hits and an RBI! ?? pic.twitter.com/eaaNziaI98

Arrieta's start was aided, of course, by the influx of runs scored by the North Siders. True to form, the Cubs hit multiple home runs in the contest, a common theme of Chicago's blowout victories this season. With three in total, the first Cubs homer occurred in the fourth, as third baseman Kris Bryant blasted a 425-footer to left off of Marlins pitcher Jeff Locke. Bryant's 16th jack of 2017, the three-run bomb provided him with 31 total RBI for the season.

It also marked the low point of Locke's disastrous start. A former Pittsburgh Pirate, Locke frequently struggled against the Cubs while a Bucco, and those demons came back to haunt him on Thursday. Lasting only four innings, Locke was taken for five runs on seven hits and three walks. His replacement, Dustin McGowan, did not fare much better, giving up a home run to Russell to begin the fifth inning. Russell was outstanding on the night, going 4-5 at the plate with three runs and two RBI to show for it. He now boasts seven homers and 29 RBI on the year.

The third home run for the Cubbies came in the ensuing inning, as catcher Willson Contreras, who has been on a tear recently, scored Bryant on a two-run shot to left off of Junichi Tazawa. Chicago's batting order was on fire from start to finish of the game, with only one starter failing to reach base. Bryant was especially effective himself, crossing the plate three times and collecting three RBI while going 2-4 with the bat.

Leading 8-1 when heading into the eighth inning, the Cubs added three insurance runs to further embarrass Miami at Marlins Park. Two consecutive two-out doubles were the source of those runs, with Russell hitting one to shallow right and Happ following that up with one to deep right to push the Cubs' lead to 10 runs. Happ, who has already become a key cog in the Cubs' batting order since being promoted to the big leagues a mere six weeks ago, put on a show in Thursday's blowout. He went 4-5 with two RBI, bringing his impressive total of runs driven in during those aforementioned six weeks to 21 in all.

Winning 11-1, the Cubs (37-35) won for the fourth time in five games, dropping the Marlins to 32-39 in the process. With 16 hits to Miami's six, Chicago obliterated the competition en route to the victory, which certainly eclipsed the lowly two-hit performance from Wednesday and thus continued the Cubs' recent up-and-down trend at the plate. Arrieta earned the win to move to 7-5, and Locke took the loss to fall to 0-3. The Cubs currently stand 1.5 games behind the Milwaukee Brewers (40-35) in the National League Central, and if the first matchup of the four-game series between Chicago and Miami is any indication, the Cubs could very well stand atop the divisional standings by weekend's end.