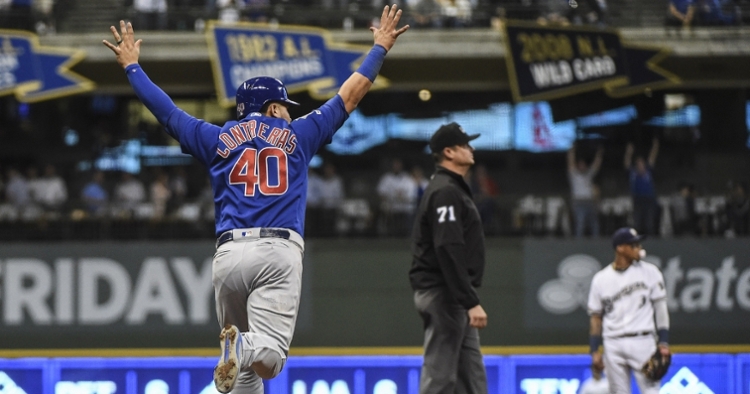 MILWAUKEE — In an offense-oriented 15-run game that featured 11 runs scored via the home-run ball, the Chicago Cubs (76-63) racked up 16 hits, including three home runs, and toppled the Milwaukee Brewers (71-68) in the opener of a 4-game series at Miller Park on Thursday. Led by a 3-for-3 showing from Ben Zobrist out of the leadoff spot and sparked by a gargantuan grand slam off the bat of Kyle Schwarber, the Cubs won 10-5 and increased their lead in the standings over the Brewers to five games.

Zobrist started at second base and hit leadoff for the second straight contest as part of just his second appearance after being removed from the restricted list, and he put together his second consecutive well-rounded plate performance. Making a case for serving as the Cubs' primary leadoff hitter moving forward, Zobrist went 3-for-3 with two walks and three runs scored, thereby becoming the first leadoff man to reach base five times in a game for the Cubs since he did it himself back in 2017.

Similarly, Willson Contreras partook in his second game for the North Siders since being activated off the injured list on Tuesday, and he showed out at the dish. On top of going 4-for-5 with two runs scored and two RBI, Contreras opened the scoring action with a 2-out RBI double in the top of the first. The Brewers took a 2-1 lead in the bottom of the second, and Contreras went on to hit a game-tying solo jack in the top of the fourth.

Jose Quintana started on the mound for the Cubs and gave up four runs while striking out five in his five innings of work. Quintana was victimized by a pair of 2-run bombs in his outing. Hernan Perez powered out a 2-run shot in the bottom of the second that put the Brewers up 2-1, and Yasmani Grandal smacked a 2-run round-tripper that evened the score at four runs apiece in the bottom of the fifth. Chase Anderson started on the bump for the Brewers and produced four innings of 2-run ball. The Brewers utilized six relievers following Anderson's departure, and the Milwaukee bullpen was largely unable to contain the Cubs' offense.

Q: How about a curveball for this pitch?
A: Only if you don't want the ball back. #ThisIsMyCrew pic.twitter.com/fhLxh52oy6

Yaz he did flip his bat on this home run. #ThisIsMyCrew pic.twitter.com/LMWw0qi6We

The Brewers, who went 1-for-9 with runners in scoring position, tallied six hits on the night, and three of them were homers. After a 2-run double, which bounced past a diving Grandal at first base, was hit by Anthony Rizzo to put the Cubs up 4-2 in the top of the fifth, Grandal answered with his aforementioned 2-run long ball in the bottom of the fifth. Rizzo attained another RBI when he hit a sacrifice fly in the top of the sixth. A few at-bats later, Schwarber hammered a 442-foot grand slam into the upper deck beyond right-center field that gave the Cubs a commanding 5-run lead.

Cory Spangenberg got a run back for Milwaukee by way of a solo home run in the bottom of the sixth. Both clubs' bats cooled off for a little while after that. However, Chicago's Jason Heyward broke out of an 0-for-31 slump with a seventh-inning single before being outed on a double-play groundout. After being called up from the minors earlier in the day, David Bote manufactured the last run of the evening when he drilled a solo homer in the top of the ninth, thus culminating in the final score of 10-5.

Cory Spangenberg hits the 3rd home run of the game for the #Brewers in the 6th! #ThisIsMyCrew pic.twitter.com/fUc2uPBpT5