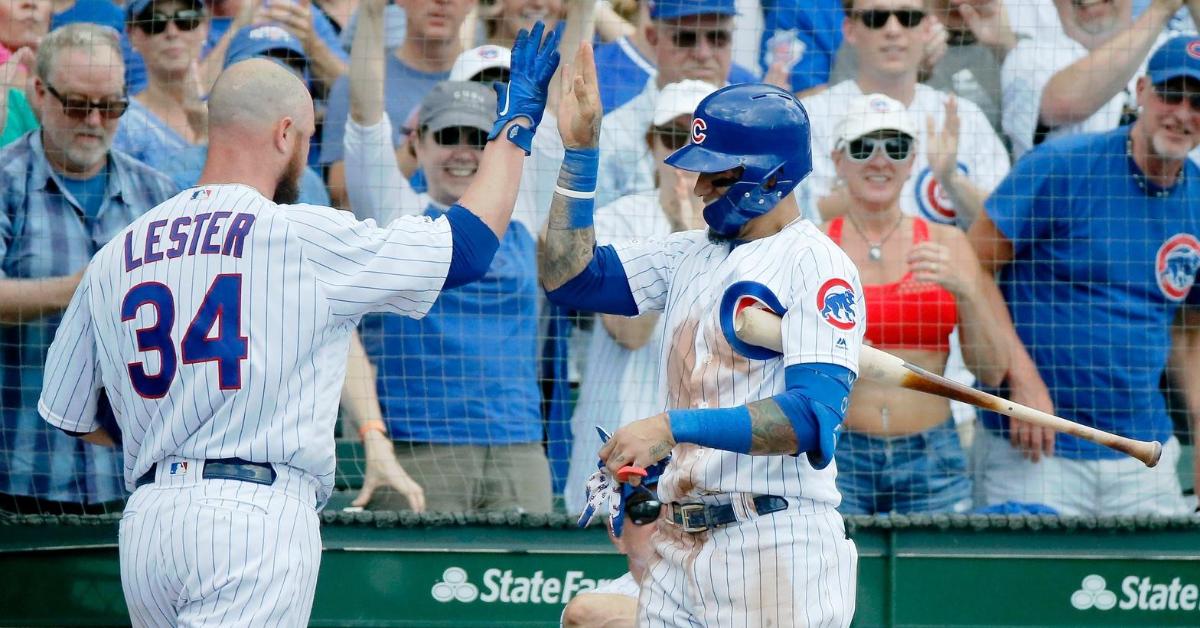 Jon Lester produced one of the best offensive performances of his career on Saturday. (Credit: Jon Durr-USA TODAY Sports

CHICAGO — Setting the tone rather emphatically, the Chicago Cubs (49-43) put up seven runs in the opening inning against the Pittsburgh Pirates (44-47) on Saturday afternoon. After jumping out to a 7-0 lead, which resulted in Pirates starting pitcher Jordan Lyles being yanked during the course of the first frame, the Cubs coasted to a 10-4 victory at Wrigley Field. Although Cubs starting pitcher Jon Lester performed well on the mound, he stole the show by coming through at the dish with his second career 3-RBI game.

Lyles got off to a terrible start, as he fell behind 4-0 through the first five plate appearances of the bottom half of the first. After issuing a pair of walks, Lyles gave up an RBI single to Anthony Rizzo, who took advantage of a shift by slapping an opposite-field base knock through the infield. Then, Willson Contreras tabbed his 19th home run of the season on a 3-run blast that carried 407 feet out to right-center. Later in the frame, with two outs and men on first and second, Lester doubled his 2019 RBI total from two to four with one swing of the bat, as he drilled a deep single that plated both baserunners and provided the Cubs with a commanding 6-0 advantage.

Fine, we’re not allowed to complain about the shift for a couple innings. pic.twitter.com/aj201xrNdS

The Cubs batted around in the first, and leadoff man Kyle Schwarber drew his second walk of the inning after Lester went yard, resulting in Lyles getting pulled from the game. Reliever Chris Stratton entered in Lyles' wake and did not fare much better in his stint on the mound. Capping off the 7-inning barrage in the bottom of the first, Javier Baez scored Lester with a double to center. Lester was not done making an impact on offense, though, as the veteran left-hander took Stratton deep in his next at-bat. Skying a solo shot 376 feet out to left-center for his first long ball of the year, Lester made the score 8-0 in the bottom of the third. Lester has homered at least once in three consecutive seasons.

In the bottom of the fourth, the sinking of the Pirates continued, with the Cubs increasing their lead to 10 runs. A 2-out rally against Stratton culminated in Addison Russell collecting two RBI with a single to shallow left. Leading 10-0 at that point, the Cubs were able to stave off the Buccos the rest of the way. Interestingly, the Pirates amassed an impressive 11 hits, just two fewer than the number of hits tallied by the Cubs, despite never having much of a shot at winning the game beyond the top of the first.

Three of the Pirates' four runs were scored via solo jacks. Jung Ho Kang hit one in the fifth, and Starling Marte garnered two solo bombs on the afternoon, with the first coming in the sixth and the second occurring in the eighth. The other Pittsburgh run was scored via a fielder's choice in the seventh. Lester, who now has five RBI to his name this season, pitched 6 2/3 innings, in which he gave up three runs and struck out six, and picked up the win for his efforts. Jason Heyward led the way for the Cubs in their 10-4 triumph by going 3-for-5 and scoring two runs.

On this episode of The Kang Show: Jung Ho hits one to Waveland.#LetsGoBucs pic.twitter.com/R9OsBWW2TJ