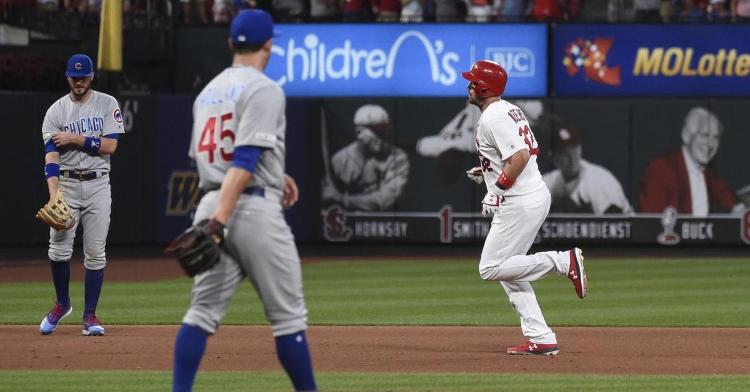 ST. LOUIS — Entering Thursday night, the Chicago Cubs (57-51) were the only team in the majors to have not won a series on the road since May 20. Unfortunately for the North Siders, that trend lived on, as the Cubs were skunked 8-0 by the rival St. Louis Cardinals (58-50) in the rubber match of a 3-game set at Busch Stadium. The Cubs shut the Cardinals out on Wednesday night, but the Cardinals returned the favor by producing a 1-hit shutout in the next contest.

The newest members of the Cubs started in their club debuts in the lopsided matchup. Right fielder Nicholas Castellanos, who was traded to the Cubs by the Detroit Tigers at the trade deadline on Wednesday, and second baseman Tony Kemp, who was dealt to the Cubs by the Houston Astros on deadline day, appeared in Chicago's starting lineup. Castellanos proved to the only semi-productive hitter for the Cubs, as he went 1-for-3 with one walk in four plate appearances.

More importantly, Castellanos registered the lone hit of the evening for the Cubbies, as his 2-out single to right field in the top of the sixth broke up a no-hitter. Cardinals starting pitcher Jack Flaherty dominated in his seven innings of work, striking out nine while giving up the one aforementioned hit and issuing just two walks. Cubs left-hander Jon Lester faced off against Flaherty but suffered a far different fate. Getting racked for five runs on nine hits, Lester made it through five innings pitched before being yanked.

Starting in center field, the Cubs' Jason Heyward produced the sole highlight for the Cubs in the rout, as he laid out for a spectacular backhanded grab on a fly ball hit by Flaherty to right-center. The jaw-dropping catch ended the fourth inning and left two runners stranded on base. The Cardinals led 2-0 at that time due to an RBI single hit by Jose Martinez in the bottom of the first and and RBI single hit by Kolten Wong in the at-bat that preceded Flaherty's fourth-inning flyout.

Up the middle and on the board! pic.twitter.com/MbqXjau6lg

St. Louis took control of the game in the bottom of the sixth, as they collected five consecutive hits before an out was recorded. Yairo Munoz smacked an RBI single that put the Cardinals ahead 3-0 and chased Lester from the contest. Reliever Derek Holland replaced Lester on the bump but failed to escape the jam. With a 3-run blast to right field that provided the Cardinals with plenty of breathing room, Matt Wieters took Holland deep for a 372-foot bomb, thus supplying the Redbirds with a commanding 6-run edge.

Matt Wieters with 10+ HRs in a season for the 7th time. pic.twitter.com/laEKh5v1uO

In the bottom of the seventh, Munoz tallied another RBI by way of a sacrifice fly. Reliever Derek Phelps, who was acquired by the Cubs earlier in the week, then pitched while donning a Cubs uniform for the first time. Wieters garnered a single off Phelps, but Phelps then attained an inning-ending strikeout of Wong. The last run of the romp came when a double-play groundout ushered the Cardinals' lead runner across with the bases loaded in the bottom of the eighth. The Cardinals outhit the Cubs 14-1 and, as a result of their win, took a 1-game lead over the Cubs in the standings.