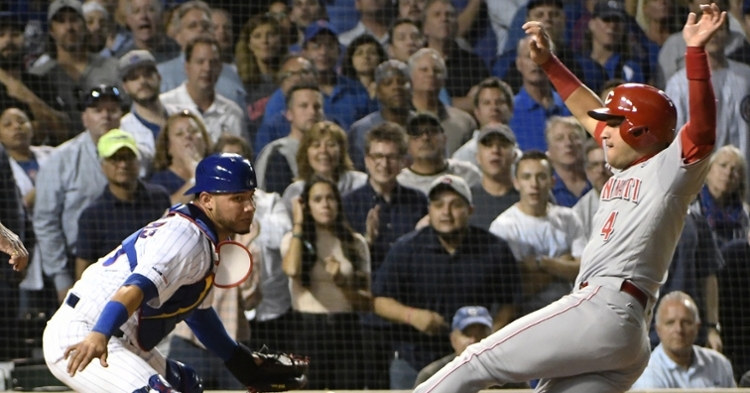 CHICAGO — Statistically speaking, the Chicago Cubs (82-70) were very fortunate to force extra innings against the Cincinnati Reds (72-81) on Wednesday night. However, the 3-2 loss suffered by the Cubs, which kept them tied with the Milwaukee Brewers (82-70) for the second wild-card spot, assuredly came as a gut punch for the North Siders. The Cubs went 8-11 in their season series with the Reds and dropped two of three at Wrigley Field to close it out, making the Reds, who lost just one of their six series versus the Cubs in 2019, the only visiting team to win multiple series at the Friendly Confines this year.

What made the Cubs so lucky to reach extras was the fact that they accrued a meager three hits and two walks through nine innings of play. The Reds, on the other hand, did not fare well with men on base and also paid the price for a boneheaded defensive mistake that led to the Cubs getting on the scoreboard. The pitching matchup between Cubs veteran Jon Lester and Reds youngster Tyler Mahle saw both starters give up just one run. However, Lester was taken for six hits in five innings pitched, while Mahle allowed just one hit in six innings of work. Cub killer Eugenio Suarez smashed a solo home run off Lester in the top of the fourth for his 48th long ball of the year, which is a big-league record for a Venezuelan-born player, and the Reds took a 1-0 lead as a result.

An inexplicably lazy defensive display by Reds shortstop Alex Blandino culminated in the Cubs knotting the game up in the bottom of the fourth. Nicholas Castellanos is known for hitting doubles, but the 2-bagger that he attained in the fourth frame was rather unorthodox. With the Cubs' first hit of the evening, Castellanos drove what was essentially nothing more than a routine single to left-center field, but he decided to try his luck at making it to second base. The throw to Blandino at second had Castellanos dead to rights, but Blandino stunningly opted to lackadaisically lay his glove down in the hope that Castellanos would dive into it. Instead, Castellanos used a crafty headfirst slide that Javier Baez was likely proud of and made it to second base safely.

Blandino's lack of effort on what should have been a simple tagout was followed by a defiant Reds challenge. The call stood, and Castellanos made it to third base on a wild pitch soon afterward. Interestingly, two Cubs baserunners were thrown out on the basepaths in the early goings, and Castellanos' good fortune seemingly made up for it. A sacrifice fly from Kyle Schwarber plated Castellanos, who avoided being tagged out by the catcher on the baseline while scurrying home, thereby tying the affair at 1-1. The Reds continued to struggle with runners on base until a sacrifice fly by Blandino ushered Jose Iglesias across the dish in the top of the seventh.

Then, in the bottom of the seventh, the Cubs' Willson Contreras came up clutch with two outs by lofting a game-tying solo jack out to left-center. Contreras' 24th long ball of the season, the dinger, which marked the Cubs' second hit, was batted on an 0-2 count, with Contreras going yard off an 0-2 pitch for just the second time in his career. The umpiring crew reviewed the homer for possible fan interference, as a Bleacher Bum reached out above the basket atop the wall and gloved the home-run ball, but the call was not overturned.

Eventually, the matchup moved to extra innings, with the final out of the ninth frame coming in the form of a Schwarber strikeout. Reds reliever Amir Garrett garnered the strikeout and boisterously celebrated, drawing the ire of Schwarber. Shirking his reputation as an instigator, Garrett hilariously ran to the dugout in order to avoid a kerfuffle with Schwarber. An impressive 2-out rally by Cincinnati resulted in the Reds scoring their third and final go-ahead run in the top of the 10th. It took just two pitches for the Cubs to record the first two outs of the half-inning, but Cubs reliever James Norwood proceeded to allow the next four batters to all reach base. Iglesias slapped what turned out to be the the game-winning hit when he cranked an RBI double into the right-field corner.

Cubs reliever Duane Underwood Jr. ended up replacing Norwood with two outs in the top of the 10th and forcing a groundout to escape a bases-loaded jam. Aside from a 1-out double from Victor Caratini, the Cubs were fairly listless in the bottom of the 10th. Recent call-up Nico Hoerner lined out to leave Daniel Descalso, who pinch ran for Caratini, stranded at second, thus wrapping up the Cubs' 3-2 defeat. In total, the Cubs mustered a modest four hits and two walks at the plate and will enter their final home series of the season, a 4-game set against the St. Louis Cardinals (85-67), having lost two in a row.