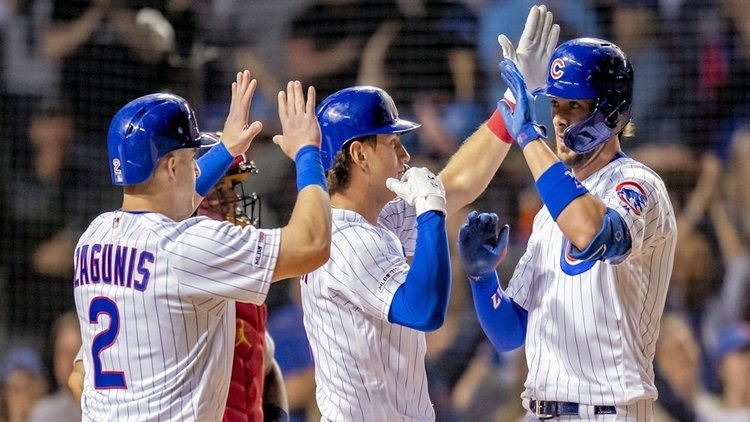 Hello, Wrigley! There’s no place like home, especially when you own a road record of just 21-33 (.389). After losing yet another road series in St. Louis last night, the Cubs have returned home for this series, hoping they can continue a successful home campaign. In the previous homestand, the Cubs went 7-2, before embarking on yet another ugly road trip.

While winning at home is great- especially for the fans who are forking out huge dollars to see them- it’s not going to be enough down the stretch. The Cubs can gain a half-game today, as the Cards are off, but they must figure out (and soon) how to win on the road, as this is a short homestand.

The “Who’s who” of the Brewers pitching staff remains sidelined, causing them to scramble at the last minute for trades. While the Crew did shore up some of their weaknesses, the Cubs will not see any new faces in the starting rotation this time around.

While there may be a post-injury question mark hanging over Cole Hamels' head for this start, Darvish and Quintana have been throwing (mostly) quality pitches as of late. The problem with Chicago’s pitching seldom seems to lie in the rotation these days, it’s the pen that appears to struggle, and no matter what is done to help, it only seems to worsen.

How will the "new and improved" bullpen fare in a home-series? pic.twitter.com/zttZwwbOxB

While I have the utmost faith in Nicholas Castellanos to do his job, the problem remains (as illustrated last night in St. Louis) that the rest of this team needs to hit, to validate Castellano’s arrival. Flaherty (Cards) had an ERA above 4.00 going into last night’s game yet managed to one-hit the Cubs (Castellanos single). While Theo managed to address the Cubs’ needs (or most of them, anyway) before the deadline, one hired bat is not going to be enough to make the difference.

Surprisingly, the Brewers’ dugout has become just a little weaker this week, as they elected to ship slugging first baseman Jesus Aguilar to Tampa, in exchange for some pitching help. Already facing a minus 17 run differential, the Crew will look to figure out new ways to produce runs without Aguilar, while praying that the new pitching helps to hold them in games.

Welcome back, Cole Hamels. Hamels has been sidelined for just over a month due to a left oblique strain, and this will be his first start since returning from the IL. Before the injury, Cole had posted a 1.22 ERA in his previous six starts, with 37 strikeouts as opposed to nine walks. When it comes to facing Hollywood, the Brewers have had some success, especially when the names Yelich, Cain, and Braun are being announced.

Last week (vs. the Cubs), Gonzalez was pulled early for shoulder tightness, which was unfortunate for Milwaukee, as Gonzalez had a no-hitter through six frames. For the most part, he’s silenced the Cubs’ offense (as have most, it seems), though David Bote and Albert Almora Jr. have had some success in limited plate appearances against him. Castellanos is 0-2 against Gio, and Kemp has never seen him.

Yu Darvish has been on fire lately, but suffered a tough last during his last outing, as he allowed a pair of runs in the sixth inning that would spell a loss for the Cubs. In four starts since the break, Yu has posted an ERA of just 2.25, with 30 Ks and only two walks (total of 24 innings pitched).

Hauser emerged from the bullpen earlier this week, due to injuries to the Brewers starting rotation. In a solo outing as a starter, he managed to last five solid innings against the A’s, using a total of 69 pitches (predetermined pitch count). In limited appearances as a reliever against Chicago, he’s been devastating, although Willson Contreras, Kris Bryant, and Albert Almora Jr. have had some success in a combined total of eight at-bats.

Q had a bit of a rough time in Milwaukee last week, giving up a trio of runs in 4.2 innings, but wound up with a no-decision. The Crew has hit Quintana well this year- tallying a total 14 earned in 14.1 innings (total three starts). Q’s ERA at home this season sits at 4.60 (10 Starts).

The good news is that the Cubs whomped on Davies last week, or rather I should Kyle Schwarber clobbered him (3-run homer and a grand slam), occurring in the Cubs only win in the three-game set at Wrigley North. As for the Cubs’ newest pair of bats. Kemp has never faced Davies and Castellanos has gone 1 for 2.

Winning against the Crew won’t be easy, as the Cubs have some things working against them (Hamel's injury, Darvish’s inability to get the W at Wrigley, and a shaky bullpen), but I think the Cubs find a way. I’d love to say, “Grab your brooms,” but I can’t see a sweep here. However, I do think the Cubs will win this series 2-1 (after all, they are home).