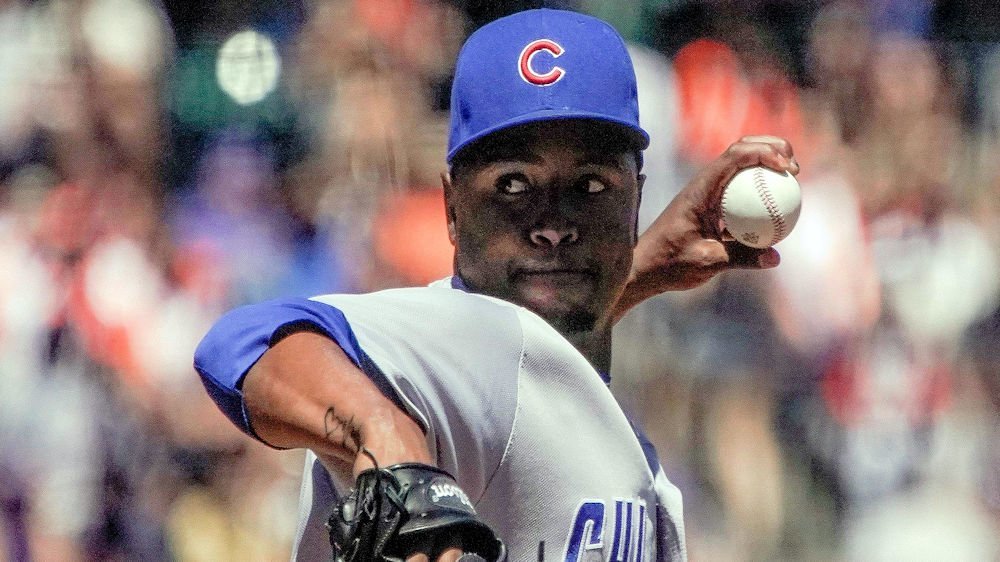 IOWA CUBS 5 – New Orleans Baby Cakes 4: It was another doubleheader for the Cubs on Sunday as that has been a common theme to start the season. Looking to rebound from a tough start last time out, Alec Mills was tagged with a start and was sharp early. However, a rough fifth inning made his line look worse than it was, but Mills was still able to get the win as the Cubs took game 1 5-4.

Make no mistake about it as the Cubs offense came to play grabbing a big lead in the first inning. Jacob Hannemann led things off with a bunt single before advancing to second on an error on the same play. Johnny Field followed that up with a single of his own to put the Cubs up 1-0 as he too would advance on the bases getting to third on another error. Three batters into the game, saw the Cubs take a 3-0 lead as Robel Garcia went deep for the second time on the year.

With Yadiel Rivera getting the Baby Cakes on the board with a homer in the second, it was Taylor Davis in the bottom of the second getting that run right back. Davis, who spend the last month with the big-league club didn’t see much time at Iowa before getting promoted, should see much more now that he has returned. Delivering an RBI single in his first at-bat is a great start with the Cubs leading 4-1 after two.

After cruising along through four innings, Mills began to lose his touch in the fifth as New Orleans came out swinging in that inning. Isan Diaz remained red hot with a solo shot to make it a 4-2 game. With a man on base, Rivera made Mills pay once again for his second homer of the day to tie things up 4-4.

Iowa appeared a little discouraged following that inning, but the offense took it upon themselves to retake the lead. With one out, Field gave the Cubs the lead for good with his fifth homer of the season as his solo shot made it 5-4 Iowa. That would be all Iowa would need a Junichi Tazawa, and Randy Rosario finished things off in the pen for the 5-4 win. Both Tazawa and Rosario have yet to allow an ER this season.

IOWA CUBS 0 – New Orleans Baby Cakes 3: Game two saw Trevor Clifton on the bump as he looked to secure the sweep. Even though he pitched much better than Mills Allowing 1 ER in five innings, the bullpen and lack of offense was the difference as Iowa dropped game two 3-0.

The lone blemish off of Clifton came in the second inning when Deven Marrero went deep for NO. 7 on the season, and the 1-0 Baby Cakes lead. At the time, that didn’t seem like it would be enough runs, but with that score still standing heading into the sixth, the Cubs turned things over to Dillon Maples hoping to keep things right where they were.

After allowing a single to open the inning, Maples was able to make some good pitches to pick up two outs and empty the bases with a caught stealing attempt from Francisco Arcia. With Lewis Brinson and Marrero extending the inning with back to back walks, Rivera put the game on ice with a double as Iowa was now down 3-0. The Cubs had a golden chance to get back into the game in the bottom half of the sixth with two runners on but were unable to do anything which did them in for the 3-0 loss.

Iowa still hasn’t recovered from that rough losing streak earlier in the week as they are 26-18 on the season. With just six hits in game two, Phillip Evans was responsible for two of them as his average is now .299. Ian Happ was hitless in both games to see his average now at .219 while Dakota Mekkes appears to righted the ship from a series of rough outings to toss a scoreless inning of relief.

Trevor Clifton with the strong start in Game 2 ?? pic.twitter.com/PHYdQv7SsV

TENNESSEE SMOKIES 1 – Jackson Generals 7: It was not the outing Thomas Hatch hoped for on Sunday as he continues to try and rediscover his early season form. In five innings of work, Hatch allowed 6 ER as the offense continued to struggle in the 7-1 loss.

Daulton Varsho gave the Generals the quick 1-0 lead with a first-inning homer before the Smokies rallied in the second to tie the game. With one out, Christian Donahue doubled to put himself in scoring position hoping to cross home later that inning. That set the stage for Luis Vazquez who came up with a single to tie the game 1-1, but a double play from Connor Myers prevented a possible big inning from Tennessee.

The tie was short lived by the Smokies as once again the long ball was in full effect. This time it was Drew Ellis going deep in the bottom of the second to put Jackson in front for good 2-1. Ellis would add a sacrifice fly in the fourth inning that came after a Jazz Chisholm triple to give the Generals the 4-1 lead. Looking to deliver the knockout punch, Jeffrey Baez went deep in the sixth inning to push the lead to 6-1 as the Smokies were left searching for answers. A Ramon Hernandez seventh-inning homer capped off the scoring with the Smokies losing 7-1.

Tennessee is now 21-22 on the season with hopes of Nico Hoerner coming back late this week. The Smokies managed just five hits in the loss as five different players each had one. Ian Clarkin continues to pitch well in relief. Following a scoreless inning Sunday, his ERA is now 1.80 for the year.

MYRTLE BEACH PELICANS 5 – Lynchburg Hillcats 4: The Pelicans returned to their winning ways Sunday as they pulled out a 5-4 win in a homer packed afternoon at Lynchburg. Getting the start was Luis Lugo who pitched solidly, for the most part, going five innings and allowing 3 R (2ER) in the no-decision.

The Pelicans offense indeed came to play early as they took the lead right away in the first inning. A leadoff Zach Davis single followed by a Carlos Sepulveda walk had a pair of runners on base with no outs. With a double steal moving both runners into scoring position, Cam Balego ripped a single up the middle to give the Pelicans a quick 2-0 advantage. That lead grew to 3-0 in the second following the Kevonte Mitchell home run, before Hillcats finally got the bats working.

Down by three in the second, it was Jose Vicente getting Lynchburg on the board with his first homer of the season to make it a 3-1 game. A Gabriel Mejia third-inning single and Trenton Brooks solo shot in the fifth erased the early deficit and brought things even once again at 3-3.

With their early lead now gone, the Pelicans turned to the long ball to retake the lead in the seventh. Wladimir Galindo put Myrtle Beach back in front 4-3 with his first homer of the season as the teams headed to the ninth with that same score. Down to there final at-bats, Lynchburg was able to draw even yet again as Luke Wakamatsu tied the game at 4-4 with a homer sending the teams into extras.

It was in the 10th when the Pelicans brought home the final run of the ball game. With the new rules in place where a runner starts on second base to start the inning, Balego moved Sepulveda to third with a single before a fielder’s choice nailed Sepulveda at home. With two runners still on base, it was Luke Reynolds coming through with the game-winning single as hit proved to be the difference in the 5-4 win.

At 16-28, the Pelicans are all about developing their players from this point on and hopefully wins follow. Five players picked up two hits in the 12-hit performance as Davis, Balego, Tyler Payne, Galindo and Mitchell had the hot bats in the win.

Birds take the lead in the top of the 10th!!@CBalego95 comes in on an error and the Pelicans lead 5-4 into the bottom of the 10th inning! pic.twitter.com/U6f5vIarrE

SOUTH BEND CUBS 8 – Dayton Dragons 4: Fresh off a loss in their last game, the Cubs got back to their winning ways on Sunday, doubling up the Dragons for an 8-4 victory. After five straight no decisions to open the year, fireballer Brailyn Marquez has responded with two consecutive wins to improve to 2-0 on the season. Marquez continues to baffle hitters at the plate, going five innings and allowing 2 ER on 2H with 2BB and 6K. His ERA is 2.70 on the season.

Marquez didn’t need his A-stuff in this one as South Bend opened up the game immediately in the first inning. D.J Artis and Delvin Zinn each earned consecutive walks as two men were on base with no outs. An error allowed Andy Weber to load the bases before a Jonathan Sierra line drive single put the Cubs in front 1-0.

With bases still loaded and just one out, Tyler Durna delivered the big blow in the first inning to give the Cubs a commanding lead. It was his bases-clearing double that saw the lead grow to 4-0 as South Bend was in complete control early. A leadoff third inning walk from Miguel Hernandez appeared to throw Marquez off his game just a bid as Michael Siani tripled him home two batters later. Siani also scored in the same frame via a Marquez balk and just like that we had a 4-2 game.

Christopher Morel has been on an extra-base binge as of late, and that continued in the fourth inning with his second homer of the season. That homer proved to be game-winning RBI as the Cubs pitching was solid for the most part. The Cubs continued to build on their lead in the fifth inning as they mounted a two-out rally.

Levi Jordan earned a walk to extend the inning before Morel was hit by a pitch to put two runners on base. With an error moving both runners up 90 feet, Eric Gonzalez delivered the finishing blow with a two-rbi single to make it a 7-2 South Bend lead. The two teams exchanged homers in the sixth and eighth innings as Juan Martinez and Artis hit those bombs to have the score sitting at 8-3. The Dragons added a run in the ninth on a Jay Schuyler double to cut the lead to 8-4, but the Cubs finished things off shortly after that for the win.

The Cubs continue their May surge to improve to 24-17. Of the 11 hits, five players contributed to ten of them as Artis, Weber, Sierra, Morel, and Gonzalez all had two apiece in the win.