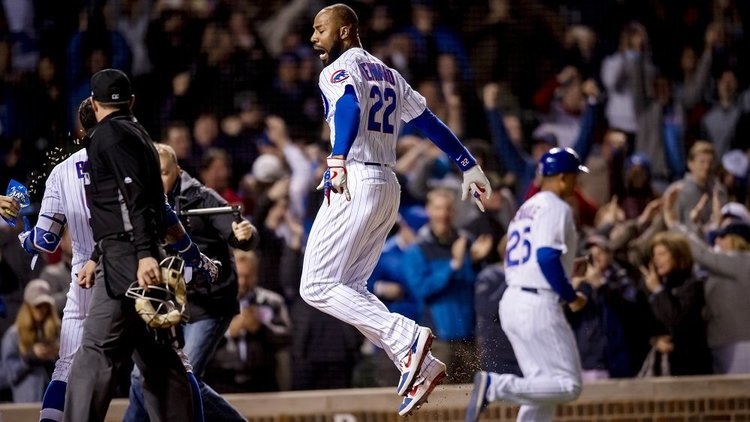 CHICAGO, Ill. — Hitting walk-off home runs at home is so much fun that the Chicago Cubs (21-13) decided to do it two nights in a row against the Miami Marlins (10-26) at Wrigley Field. One game after third baseman Kris Bryant broke the Marlins' hearts with a walk-off 3-run blast, right fielder Jason Heyward got in on the walk-off action by sinking the Fish with a solo blast in the bottom of the 11th on Wednesday. Although the Cubs blew a ninth-inning lead for the second time in three days, Heyward's bomb to the opposite field made that moot and resulted in a thrilling 3-2 Cubs win at the Friendly Confines.

Led by starting pitcher Kyle Hendricks, who dominated in an 8-inning start, the Cubs took a 2-1 lead into the ninth inning in the penultimate contest of the 4-game series. Hendricks struck out seven and allowed just five hits before being pulled with 96 pitches under his belt at the conclusion of the top half of the eighth. In the top of the ninth, former Marlins and current Cubs reliever Steve Cishek struggled and ultimately allowed the tying run to score on a grounder up the middle after enabling the lead runner to reach third base via a wild pitch.

Prior to that, the Marlins took a 1-0 lead way back in the top of the first, thanks in large part to a throwing error committed by Hendricks on the first at-bat of the game. Erstwhile Cubs second baseman Starlin Castro came through for the Marlins with a 2-out RBI single to left later in the frame. That proved to be an anomaly for Miami, as the Marlins went 1-for-10 with runners in scoring position in the loss.

Marlins starter Jose Urena was not quite as dominant as Hendricks, but he was close. Pitching seven innings of 2-run ball, Urena was taken for five hits and three walks and suffered through just one bad inning. Urena allowed each of the Cubs' first three batters in the bottom of the fourth to reach base, including shortstop Javier Baez, who smacked an RBI base knock to center that plated Bryant. Soon afterward, first baseman Anthony Rizzo put the Cubs up 2-1 when he came home on a passed ball.

The Cubs tallied a modest six hits all night, with Rizzo going 2-for-4 and serving as the lone Cub with multiple hits, but they benefited from the most important hit of the evening. Heyward led off the bottom of the 11th and got underneath a fifth-pitch breaking ball, sending it 370 feet to left for his second career walk-off dinger and lifting the Cubs to a 3-2 victory. Heyward now has six home runs and 18 RBI on the year. Also of note, Cubs infielder Addison Russell returned to the lineup for the first time since being suspended for domestic violence last September. He started at second base and went 0-for-3 with one walk at the dish.