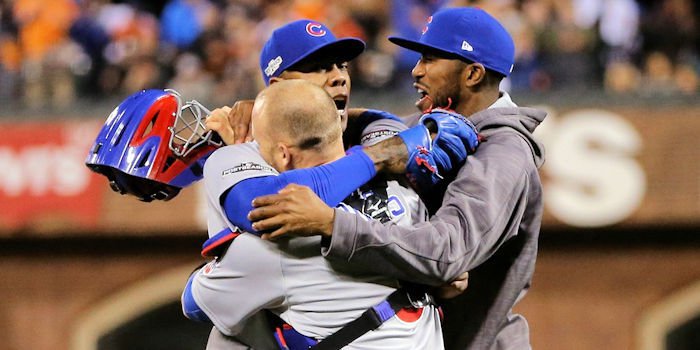 CHICAGO -- The Cubs will play the Los Angeles Dodgers in the upcoming National League Championship Series, starting on Saturday night. The Cubs shocked the Giants with a historic 9th-inning comeback in Game 4, moving to their second straight NLDS victory. The Dodgers had to win on the road as well, in an epic Game 5 victory over the Nationals. This is the first time Los Angeles has been in the NLCS since 2013. Just like the Cubs, they have a great stock of young talent and seasoned veterans. So what do the Cubs have to worry about?

This is pretty obvious, right? Kershaw is the best pitcher in the game when healthy. He only was able to start 21 games this year due to injury, but if he had a full season, he would have won the Cy Young award and maybe even the MVP (he still finished with a 5.9 WAR!!). He came in at the end of Game 5 to get the save, finally adding a postseason note to his amazing career.

I would not look at the numbers he posted in the NLDS, as they are a bit skewed. For example, in Game 4 the bullpen could not hold the lead when he loaded the bases, and he was already pitching on short rest. He will pitch in Game 2, but the Cubs could see him three or more times. Plus, Kershaw is a lefty with one hell of a curveball – how will the Cubs take him on?

With all of this being said, the entire pitching staff outside of Kershaw is arguably the weakest of the four teams left. Scott Kazmir and Hyun-Jin Ryu are out due to injury, meaning that their second starter after Kershaw is former Cub Rich Hill. Hill gave up five runs in 7 innings pitched in two starts in the NLDS, though he was able to get himself out of bad situations multiple times. Kenta Maeda went only three innings in his first postseason start, and young star Julio Urias only came out of the bullpen to pitch two innings. It is the here where the Cubs can really capitalize over their starting pitching.

Different Offensive Weapons to Choose from

The Dodgers’ leader in WAR was not Kershaw, but rookie Corey Seager. At 22 years old, he showed no signs of struggle in the postseason, and hit two home runs in the first two games. He is the guy who can silence Wrigley Field early, and will be the guy that the Cubs will have to look at the most to try and work around.

Seager finished 2016 with 26 home runs and 40 doubles, but he is not the only on with a lot of pop. Four Dodgers finished with more than 20 home runs, and that does not even include slugger Adrian Gonzalez. In Game 5, the Dodgers were able to jump on the board and start a run thanks to young talent Joc Pederson, who hit an opposite field home run against Max Scherzer to tie the ballgame. They also have Chase Utley, who, despite his age, has always been a great postseason hitter.

The offense is not as potent as the Cubs. They strike out a lot, and had to use a lot of their bench to just get past the Nationals. They do get on base, and they are able to start offensive runs.

Use of the bullpen

This entire postseason has revolved around the idea on when to use your closer. Traditional baseball analysts say “The closer pitches the ninth and that’s it” while more analytical minds say “Use them whenever there is a big threat.” This proved to be fatal for Buck Showalter and the Baltimore Orioles, as they did not even use their closer Zach Britton in one of the most ridiculous decisions in postseason history. That being said, the Cubs tried using Aroldis Chapman for a two-inning save in Game 3, which turned out to be a bad idea.

Dodgers manager Dave Roberts worked his bullpen in a brilliant manner in Game 5. He brought in Julio Urias for two shutout innings, and later brought in closer Kenley Jansen in the middle of the 7th inning. Jansen would go on to throw more pitches than he ever has thrown before, but was able to go until the 9th. After walking the first two batters, Jansen was pulled…for Clayton Kershaw. He gets Daniel Murphy to pop out, and a strikeout right after puts the Dodgers in the NLCS. Who does that?

The point is, Dave Roberts has plenty of different ways to use his bullpen. Plus, this is a better bullpen than the Giants. If the Cubs are going to score runs, they need to strike first over the starters.

The Dodgers have been a significant team throughout this decade, with the best starting pitcher and some solid offense. However, I do not see them pulling any upset over the dominant Cubs. Their starting pitching is weak after Kershaw, and the Cubs will capitalize. Cubs take the series in 5 games and will win the first pennant since, as Steve Goodman puts it, the year we dropped the bomb on Japan.