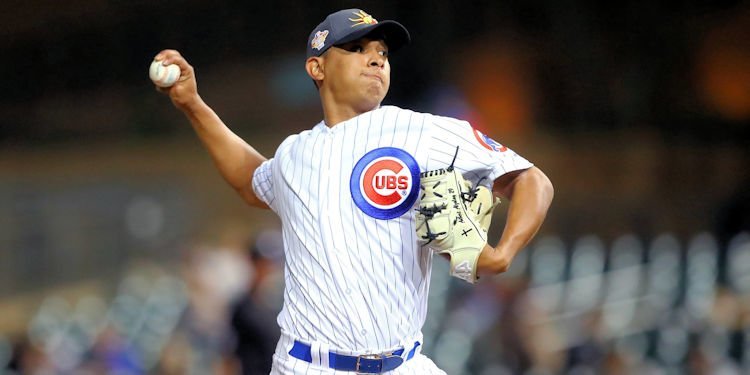 The Cubs rotation was dealt a considerable blow late last week as their most consistent pitcher since May 1 Kyle Hendricks hit the IL in what they are calling right shoulder Inflammation.

When you see that injury, people tend to shy away from it as they think it is closely resembled to what pitchers call a dead arm. The initial prognosis is excellent, and the Cubs don’t expect Hendricks miss more than two or three starts max, but keep in mind this is the same injury Kris Bryant had which we all know how that ended last year.

With Hendricks scheduled to pitch Thursday and the Cubs having an off-day Monday, the Cubs had the luxury of not needing a starter until next week potentially as everyone would be on regular rest had they went along as planned. Cubs manager Joe Maddon will go with Tyler Chatwood on Thursday as it will give his staff a chance at an extra day’s rest on this 10-game homestand.

The 24-year old Adbert Alzolay has been the top arm in the Cubs system over the past few years and was set to make his MLB debut last May in Cincinnati in game two of a doubleheader. After going 2-4 at Iowa with a 4.76 ERA in eight starts, Alzolay hit the DL with a shoulder injury oddly enough and never pitched again last season.

The injury bug hit him again this spring as he didn’t see MILB action until early May, but since then he has gone 2-2 with a 4.00 ERA but has been 2-1 with a 3.09 ERA since his promotion to Iowa which includes a 1.79 ERA over his last five starts. Armed with a fastball that sits 93-95 MPH, Alzolay has always lacked consistency with his command which has prevented him from going deeper into games.

That has not been an issue so far this season as he has 49 punchouts in 36 innings of work to go with just eight walks as he continues to dominate AAA hitters. The lone problem he has had this season has been giving up the long ball as he has allowed at least one homer in five of his six starts at Iowa.

Still, this may shortly be the perfect time to get his feet wet in Chicago as he is undoubtedly one of the bright pitching gems for this team.