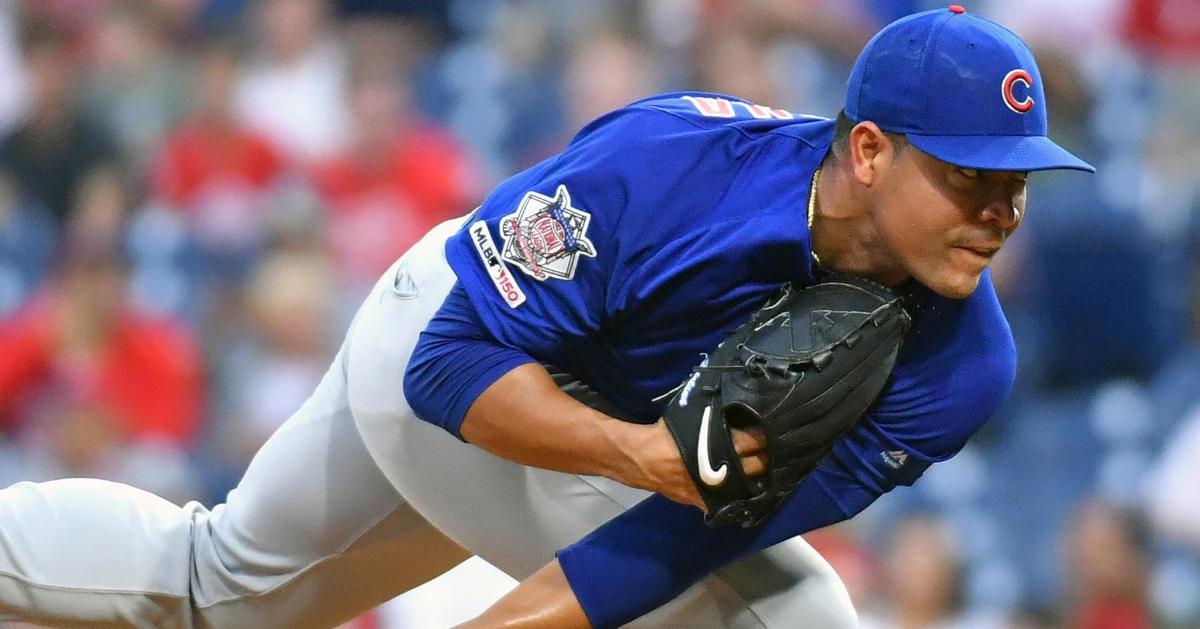 PHILADELPHIA — With a modest five hits and a 1-for-10 showing at the plate with runners in scoring position, the Chicago Cubs (64-55) were downed by the Philadelphia Phillies (61-58) in the opener of a 3-game series on Tuesday night. Despite a solid start from left-hander Jose Quintana, who tallied a career-high 14 strikeouts, the Cubs came up short on a misty evening at Citizens Bank Park. The Phillies won 4-2 and benefited from a pivotal Cubs error and a trio of clutch 2-out hits.

Quintana fanned 14 in his six innings of work and also gave up two runs, one of which was an unearned run brought on by the aforementioned error. Cubs manager Joe Maddon opted against pitching Quintana past the sixth, though, as the hurler had already thrown 110 pitches. That led to the Phillies tacking on two runs against Cubs relief late in the contest. Starting on the bump for the Phillies was Jason Vargas, whom the Cubs faced when he was a member of the New York Mets (61-58) earlier in the season. Like Quintana, Vargas pitched six frames of 2-run ball, but he struck out just one opposing batter.

Both teams struggled to manufacture offense, as each club left eight men on base. Despite garnering multiple critical hits over the course of the matchup, the Phillies went 0-for-7 with runners in scoring position. Philadelphia got on the scoreboard due to an embarrassing error suffered by Cubs second baseman Ian Happ in the bottom of the third. Happ totally misjudged a routine popup and botched the catch, thereby allowing Phillies catcher J.T. Realmuto to reach base. An ensuing single advanced Realmuto to third, and he then scored on a sacrifice fly by Scott Kingery.

A sacrifice fly from Cubs shortstop Javier Baez knotted the score at one run apiece in the top of the fourth. Cubs left fielder Nicholas Castellanos led off the frame with an infield single and eventually tagged up and scored from third on a towering fly ball hit to the warning track in left field by Baez. Phillies left fielder Sean Rodriguez threw a dart to home plate after gloving Baez's fly ball, and Castellanos barely avoided being tagged out by Realmuto.

Realmuto scored the Phillies' second run of the evening, too, as he swatted a 399-foot solo bomb to right-center in the bottom of the fifth for the first of three significant 2-out hits attained by the Fightin' Phils. Castellanos quickly answered Realmuto's blast with one of his own, as he skied a 380-footer to left to lead off the sixth. The game-tying jack was followed by a double off the bat of Cubs third baseman Kris Bryant, who went on to make it to third via an infield single by catcher Jonathan Lucroy. If not for a deflection off a glove, Lucroy's infield hit could have easily gone into the outfield and scored Bryant. Instead, it set the stage for an inning-ending foulout by Cubs center fielder Albert Almora Jr. that stranded runners on the corners.

Fresh off the bereavement list, Cubs reliever Kyle Ryan replaced Quintana on the mound to begin the seventh, and he gave up a single before collecting an out. Thereafter, David Phelps relieved Ryan, and, following a strikeout, he gave up a 2-out double to Realmuto that plated what proved to be the winning run for the Phillies. In the bottom of the eighth, Roman Quinn pushed an insurance run across by drilling a 2-out triple to deep center field off Cubs reliever Duane Underwood Jr.

The Cubs proceeded to accrue a pair of baserunners by way of a hit by pitch and a walk in the ninth. However, thanks in part to a questionable strike-three call that came at the expense of Cubs pinch hitter Tony Kemp following the hit by pitch that began the final frame, Phillies reliever Hector Neris escaped the tense situation. With two outs and runners on first and second, Neris forced Cubs right fielder Jason Heyward into a groundout, thus finalizing the Cubs' 4-2 loss.

Not. Even. Close. A brutal called strike 3 by umpire Marty Foster in the 9th of a tight ball game to @tonykemp. #Cubs v #Phillies https://t.co/RgffQs65vg pic.twitter.com/PZnvBNh0wP