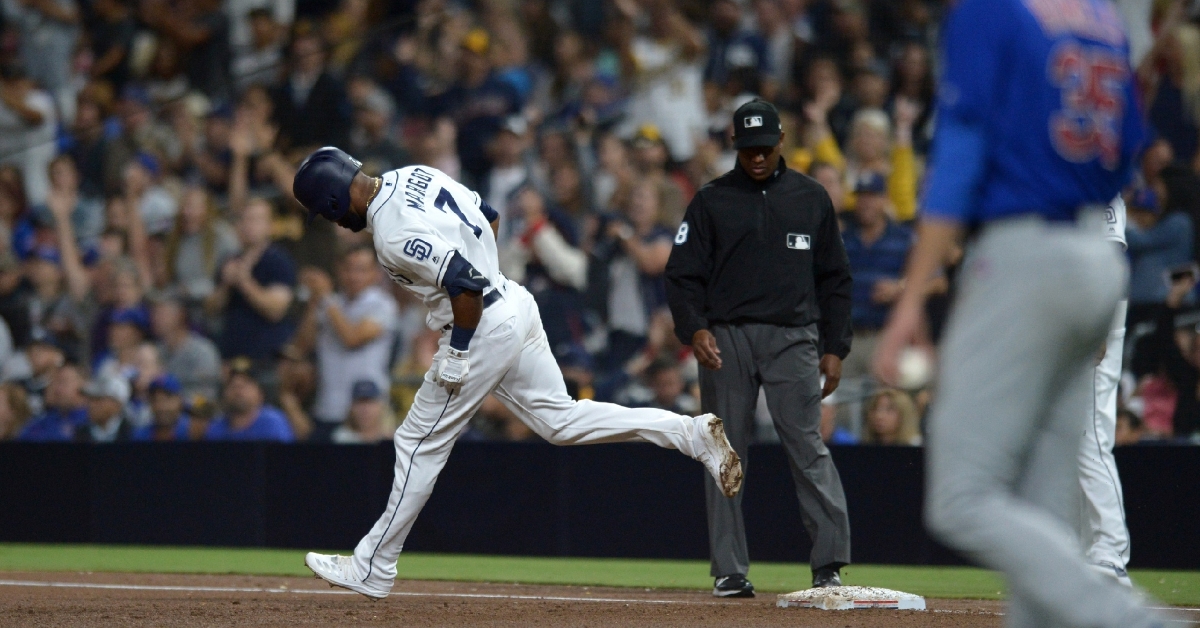 Cole Hamels gave up a go-ahead home run to Manuel Margot in the bottom of the fifth, and it turned out to be the winning hit. (Credit: Jake Roth-USA TODAY Sports)

SAN DIEGO — With a listless performance that included just three hits and one walk, the Chicago Cubs (77-68) were cold at the plate from start to finish on Wednesday and got shut out as a result. Falling to the San Diego Padres (68-77) 4-0 in the third installment of a 4-game series at Petco Park, the Cubs went 0-for-4 with runners in scoring position en route to losing for the fifth time in six days. San Diego native Cole Hamels started on the mound for the Cubs and, despite striking out six, toed the rubber for a mere 4 1/3 innings as part of a lackluster homecoming.

Hamels has pitched well at Petco Park over the course of his career, but he struggled with his command on Wednesday. Racking up 91 pitches in a little over four innings of work, Hamels was pulled having given giving up one run on four hits and four walks. After drawing the game-winning walk in Tuesday's extra-inning victory recorded by the Padres over the Cubs, Padres center fielder Manuel Margot stole the show in game three of the 4-game set and was essentially the only non-pitcher for either team to experience substantial success on the night.

Margot hustled for an infield single in the bottom of the third and advanced to second base on the play because, after fielding the nubber, Hamels fired an unnecessary throw to first base that sailed into right field for a throwing error. Although he was left stranded in the third frame, Margot took matters into his own hands when he skied a leadoff home run out to left field in the bottom of the fifth, with the go-ahead dinger bringing forth the only run allowed by Hamels.

Furthermore, Margot showed out on defense and played a major role in keeping the Cubs scoreless. In the top of the second, Cubs first baseman Anthony Rizzo lined a leadoff triple off the right-field wall. The next at-bat resulted in a flyout to shallow center field that was followed by a great throw to the plate by Margot, which caused Rizzo to hold at third base. Needless to say, the Cubs were unable to score Rizzo in the second inning and were also unable to score in the fourth inning, when Margot made a leaping catch at the wall to snag a high drive off the bat of Cubs right fielder Nicholas Castellanos that could have potentially gone out for a solo jack.

Great Padres baserunning was a fixture of the contest, with an error-induced steal of home plate in the bottom of the sixth exemplifying as much. With runners on the corners and two outs, the Padres successfully pulled off a play that was seemingly designed in order to take advantage of one of Cubs reliever Brad Wieck's weaknesses. Wieck was traded to the Cubs by the Padres at the trade deadline, meaning that the Padres are very familiar with the left-hander's skill set. Therefore, when Padres second baseman Ty France scooted halfway down the baseline between third and home, as if he was daring Wieck to try and pick him off, the bold ploy came across as intentional.

Wieck panicked and rushed a throw to Cubs catcher Willson Contreras, with the lob sailing behind Contreras and enabling France to score on the throwing error. The Padres doubled their lead by way of a 2-run single from outfielder Wil Myers in the bottom of the seventh, which came against Cubs reliever Duane Underwood Jr., and went on to win 4-0. Margot led the charge for the Padres by going 3-for-4 with two runs scored and one RBI. He was the lone batter in the ballgame to accrue multiple hits.