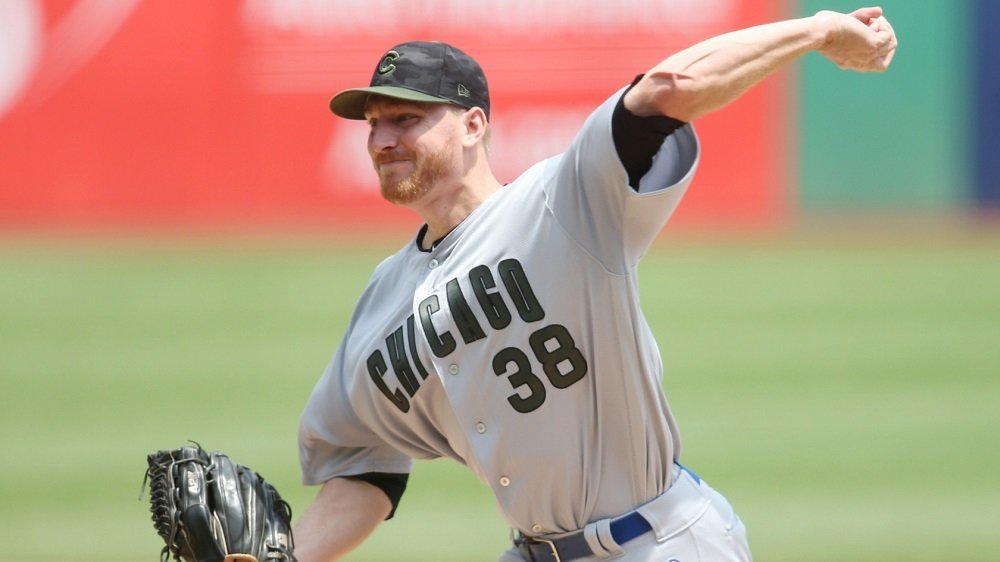 PITTSBURGH — Making his first start of the year in place of the injured Yu Darvish, Chicago Cubs hurler Mike Montgomery, who has been used out of the bullpen all season, performed incredibly well in a shutout victory over the Pittsburgh Pirates.

The Cubs experimented with Montgomery as a starter last season, but that experiment proved unsuccessful, as Montgomery was moved back to the bullpen. But, with a winning start that saw him increase to 1-1 overall, Montgomery showcased that he might be more inclined to start ballgames this season. And, considering how mightily that Cubs starting pitcher Tyler Chatwood has struggled as of late, Montgomery might be the perfect candidate to replace him in the rotation.

Winning 7-0 in their Memorial Day contest at PNC Park, the Cubs took the lead rather early on a solo home run by Anthony Rizzo, marking his seventh home run of the season. Coming on the first pitch of the inning, Rizzo's homer was blasted well over the partition in right field to put Chicago ahead 1-0.

.@ARizzo44 is 2nd in the NL with 25 RBI this month. #EverybodyIn pic.twitter.com/2kxY1gn8vQ

Two at-bats later, the Cubs' Kyle Schwarber nearly came up with a solo blast of his own to the opposite field, lofting a shot down the left-field line. Pirates left fielder Corey Dickerson robbed Schwarber of a home run, however, leaping up at the wall and snagging the ball just before it reached the seats.

Pittsburgh, on the other hand, was impotent at the plate during the early innings, failing to garner a base runner until Dickerson singled with one out in the bottom of the fifth. Montgomery gave up only one additional hit thereafter, finishing with two hits and five strikeouts to his name in 5.2 innings pitched. The most important statistic for Montgomery came in the form of walks. Giving up zero walks, Montgomery served as a stark contrast to Chatwood, who has walked 45 batters in 48.1 innings pitched this season.

Chad Kuhl got the start on the hill for the Pirates, and the Rizzo homer proved to be the only run given up by him. Walking four and getting taken for four hits, Kuhl struck out five during his six innings in the game. Kuhl, who dropped to 4-3 with the losing decision, got pulled after the sixth frame, and the Cubs took advantage. As a pinch hitter, Addison Russell provided Chicago with a 3-0 lead by lining a two-run homer to left. Serving as his second home run of the year, Russell's blast came off Pirates reliever Steven Brault and scored the Cubs' Albert Almora, Jr., who singled earlier in the frame.

The top half of the eighth saw the Cubs add a couple of insurance runs in an inning that assuredly left the Pirates feeling frustrated. Following a single by Rizzo to lead it off, Cubs infielder Javier Baez got sawed off by an inside pitch that he swung at and somehow picked up a single because of it. Shattering his bat, Baez was able to make contact with the ball, which proceeded to die on the grass between home plate and the pitcher's mound.

Adding to the Pirates' frustration on the Baez single was a throwing error by Pittsburgh pitcher Kyle Crick, as he attempted to throw Baez out at first but, instead, sent the ball sailing into right field. A few minutes later, another Pirates throwing error resulted in runs being scored by the Cubs.

With men on second and third after Crick's error, Schwarber was intentionally walked to load the bases and open up the double-play possibility. The Pirates nearly pulled off a double play in the ensuing at-bat, with Cubs catcher Chris Gimenez hitting a grounder to shortstop. Pirates shortstop Sean Rodriguez went home with it, thus outing Rizzo, but as Pirates catcher Elias Diaz attempted to throw to first for the second out, Rizzo slid into him.

Disrupting the double-play attempt, Rizzo forced Diaz to throw high for an error that enabled the Cubs to tack on two runs for a 5-0 advantage. A clean slide, the play left Diaz in pain but was not at all egregious. An umpire-instigated review of the play took place in order to determine if Rizzo interfered with Diaz, but the original ruling stood as called. Pittsburgh manager Clint Hurdle was infuriated with the ruling, getting ejected for arguing with an umpire about it. Pirates fans throughout PNC Park made their displeasure with the umpires' decision known by stridently booing, and they let Rizzo hear about it with a chorus of boos during his next plate appearance.

Rizzo got the last laugh, though, by accruing a two-run single to center in the top of the ninth. Going 3-4 with three RBI and one run, Rizzo increased his May RBI total to 27 and has now driven in 36 for the season. Totaling 12 hits in all, the Cubs were very efficient on the offensive end. Gimenez, who was only just called up a few days ago, went 2-5 in his first start in the majors this season. Also of note, Russell went 2-2 and collected two runs and two RBI after entering as a pinch hitter.

Following their Sunday night affair, the Cubs did not arrive at their hotel in Pittsburgh until around 3:45 AM local time on Monday, making their dominant 7-0 win over the Pirates (28-25) win all the more impressive. Limiting the Buccos to two hits and not walking any Pirates hitters at all, the Cubs (28-22) rode an impressive start by Montgomery to victory, moving a game and a half ahead of the Pirates in the standings, as a result.