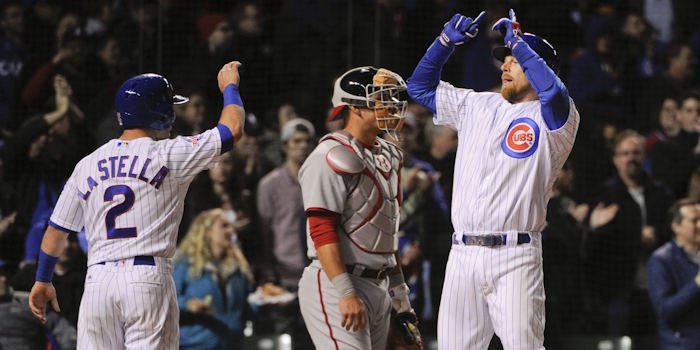 With former Cubs manager Dusty Baker returning to the Friendly Confines for the first time as the manager of the Nationals, the Cubs came out on top in a battle of the National League’s best and brightest. The Chicago Cubs (21-6) defeated the Nats 5-2 at Wrigley Field, taking the lead in the bottom of the fourth and never looking back.

Kyle Hendricks started for the Cubs and pitched a gem, only giving up two hits in six innings. Nationals (19-9) starting pitcher Joe Ross was impressive himself, striking out nine batters in 6.2 innings.

However, Ross’ impressive showing was spoiled by a lackluster fourth inning on his part that was highlighted by a ground rule double hit by slugger Kris Bryant, who played in right field on the night. An intentional walk of first baseman and power hitter Anthony Rizzo followed Bryant’s double, loading the bases in the process, and second baseman Ben Zobrist capitalized by singling to right. Though Rizzo was thrown out at third, two runners scored on Zobrist’s clutch hit, and the Cubs never relinquished the lead.

The game served as a potential NLCS preview, and it definitely lived up to its billing. The usually mild-mannered Dexter Fowler, who is arguably the MVP of the National League through the first month of the season, was ejected in the bottom half of the third after arguing a questionable strike call that ended the inning. Jason Heyward, who had been on the shelf while nursing a sore wrist, replaced Fowler in the lineup.

Despite not pitching since April 26, Hendricks did not show any signs of rust on Thursday night, mowing through the Nationals batting order at will. Zobrist was the hero of the game for the Cubs, though, driving in what proved to be the winning runs with his single in the fourth and adding some insurance runs with a home run in the eighth. Going 2-4 with 4 RBI on the night, Zobrist definitely made the most of his at-bats. Shortstop Addison Russell put the game virtually out of reach for the Nationals later in the inning, scoring left fielder Ryan Kalish on a double to deep left center.

Cubs third baseman Tommy La Stella had an efficient night at the plate, going 3-4 and scoring two runs. As for the Nationals, left fielder Jayson Werth was the lone bright spot at the plate, bringing in two runs on a practically meaningless homer in the top of the ninth. The game ended on the very next at-bat, though, and the victory was secured for both the Cubs and Hendricks. The young right-hander moved to 2-2 on the season, and Ross endured his first loss of the 2016 slate, moving to 3-1.

Even though their leadoff hitter was booted from the game only three innings in, the Cubs definitely did not lack for offensive production on Thursday. Needless to say, Zobrist was the catalyst, as he continued his hot streak and drove in four of the Cubs’ five runs. Chicago’s premier offseason acquisition now has 10 RBI in the last four games, a stunning stat considering he only had 10 RBI to show for himself through the first 21 games of the season.

Entering the game, the Cubs had outscored their opponents by a whopping 93 runs, by far the best in the majors, and only helped to make that jaw-dropping total even more baffling on Thursday. Clearly playing the best baseball of any team right now, the Cubs will look to continue their stellar play tomorrow afternoon, with veteran starter John Lackey of Chicago squaring off against ace pitcher Max Scherzer of Washington.