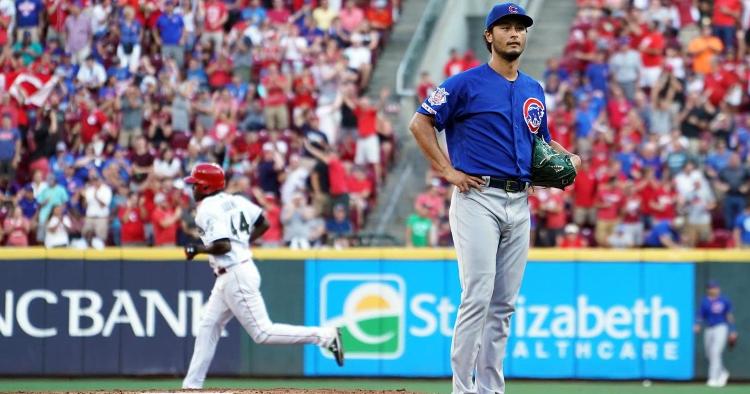 CINCINNATI — A far cry from their 22-run output from the previous two games combined, the Chicago Cubs (63-53) tallied just two runs and five hits against the Cincinnati Reds (55-59) on Friday. After jumping out to a 1-0 lead in the first inning, the Cubs scored just one run the rest of the way and lost 5-2 at Great American Ball Park. The Reds hit three home runs on the night and were led by starting pitcher Trevor Bauer, who pitched a 7-inning gem.

Cubs newcomer Nicholas Castellanos skied a pair of home runs in the series opener versus the Reds on Thursday, and he picked up where he left off by hammering a 396-foot solo blast out past center field in the opening frame on Friday. Young Reds sensation Aristides Aquino answered with a 2-run blast in the bottom of the second. The 373-footer out to right followed a leadoff double and came off Cubs starter Yu Darvish. Darvish fanned nine in six innings pitched but gave up four runs on four hits and received the losing decision.

Three of the four hits allowed by Darvish were homers. Cub killer Eugenio Suarez led off the bottom of the fourth with a towering 430-footer smoked out to right. Then, in the bottom of the sixth, veteran slugger Joey Votto increased the Reds' lead to three runs with a 416-foot solo round-tripper that carried beyond center field. Jose Peraza put the Reds up 5-1 with a 2-out RBI base knock in the bottom of the seventh that occurred with Cubs reliever Steve Cishek toeing the rubber. The Reds collected six hits by six different players on the evening.

Meanwhile, Bauer dominated in his seven innings of work, with the newly acquired hurler striking out 11 while getting taken for just one run and three hits. Chicago's best bet to carry out a comeback came in the inning that followed Bauer's departure. Reds reliever Michael Lorenzen backed himself into a corner by giving up two walks and one bloop single to load the bases with no outs. Amir Garrett replaced Lorenzen on the mound at that point, and the Cubs seemed poised to open the floodgates when Garrett's second pitch beaned Anthony Rizzo, thus forcing home a run.

However, Garrett gathered himself after that, and the Cubs failed to hit the ball out of the infield in the proceeding three at-bats. A fielder's choice that resulted in a force play at the plate was followed by a 3-pitch strikeout and an inning-ending groundout, thereby resulting in the Reds escaping the precarious situation relatively unscathed, as they held a 5-2 lead late in the contest. With the exception of giving up a 2-out double to Jason Heyward, Reds closer Raisel Iglesias fared well in the top of the ninth, and the Cubs lost by three runs in the second installment of the 4-game series.