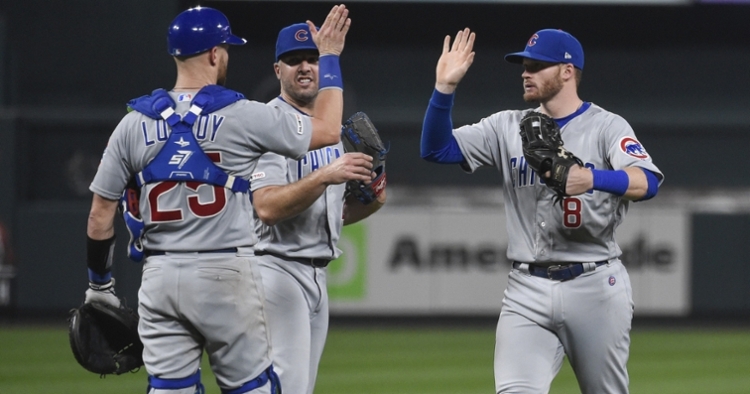 As a result of their 8-6 victory, the Chicago Cubs will have a chance to sweep the St. Louis Cardinals on the road to close out their season. (Credit: Joe Puetz-USA TODAY Sports)

ST. LOUIS — Embracing their newfound roles as spoilers, the Chicago Cubs (84-77) won their second straight over the St. Louis Cardinals (90-71) on Saturday. With nothing to play for but pride and prosperity, the Cubs gave it their all at Busch Stadium against a Cardinals team gunning for the National League Central crown. The Cubs homered four times and outhit the Redbirds 16-6 en route to winning 8-6. Ian Happ sparked the Cubs by hammering a pair of dingers as part of a solid 3-for-5 showing. Also of note, Cubs shortstop Addison Russell went 4-for-5, marking his first 4-hit performance of the season.

Living up to the billing as one of the best rivalries in baseball, the contest was not without controversy, as the benches cleared for a brief hubbub surrounding a hit by pitch. After missing his previously scheduled start due to shoulder fatigue, Cubs left-hander Cole Hamels made what might have been his final appearance in a Cubs uniform, with the impending free agent taking part in a condensed start that was effectively an audition for potential free-agency suitors.

Hamels pitched well in his scoreless stint, as he struck out eight and gave up just two hits in four innings of work and also went 2-for-2 with a bat in his hands. However, Hamels incited drama when he let a pitch get away from him in the bottom of the second. The inside fastball grazed fiery Cardinals catcher Yadier Molina's arm, leading to Molina, who had been hit by Hamels once before, barking at Hamels. While there was certainly no reason to think that the beaning was intentional, Molina seemed to think that it was, and Hamels chirped back at Molina, resulting in the bullpens and the dugouts emptying.

Benches clear in St. Louis during the 2nd inning of Cubs-Cardinals. pic.twitter.com/5PtmR2yD6C

Nothing came of the minor to-do, as Molina eventually calmed down and took first base. Adam Wainwright did not generate any controversy in his start on the bump for the Cardinals, but he did generate plenty of Chicago runs. Wainwright was racked in his 4 1/3 innings pitched, with Cubs hitters taking him for six runs on 12 hits. Kyle Schwarber tallied the first pivotal hit off Wainwright when he jacked a solo shot out to right field in the top of the first, thus putting the Cubs on the scoreboard.

In the top of the third, Happ recorded his first of two round-trippers on the evening by walloping a monstrous 436-footer into the center-field bleachers. The 2-run bomb made the score 3-0 in favor of the North Siders. Schwarber led off the fifth with a single and was then ushered home on Happ's second long ball. The 2-run opposite-field tater carried over the wall in left field, and, a few at-bats later, it was followed by a solo home run from Victor Caratini that provided the Cubs with a 6-run lead.

The Cubs' bullpen did not exactly experience smooth sailing in the victory, with the Cardinals garnering all six of their runs off Cubs relievers. Harrison Bader manufactured the first Cardinals run with a solo blast off Cubs reliever Kyle Ryan in the bottom of the fifth. Later in the inning, St. Louis native David Phelps toed the rubber for the Cubs and gave up a 2-run triple to Tommy Edman that pulled the Cardinals to within three.

A Tater from Bader ?? pic.twitter.com/KrAgt4x5rH

Cubs reliever Brad Wieck allowed St. Louis to load the bases with no outs in the bottom of the seventh. Steve Cishek entered to pitch for the Cubs at that point, and, after giving up an RBI base hit to Edman, he minimized the damage by forcing a double-play groundout and drawing an inning-ending flyout soon after that. A run came home on the double play, decreasing the Cubs' lead to one run, but the North Siders never relinquished their lead. The top of the eighth saw Tony Kemp slap an RBI single through the infield and Nico Hoerner accrue a sacrifice fly.

Cubs reliever Pedro Strop proceeded to give up a solo homer to Paul DeJong in the bottom of the eighth, and Brandon Kintzler, who replaced Strop to begin the bottom of the ninth, hit a batter with his very first pitch. Kintzler remained composed, though, and collected three outs in three straight at-bats to finish off the Cubs' 8-6 triumph. As a result, Kintzler earned his first save as a Cub. At the start of Sunday's action, the Cardinals will stand one game ahead of the Milwaukee Brewers (89-72), who also lost the first two games of their final series, meaning that, on Sunday, a Brewers win combined with a Cubs win would result in a tiebreaker between the Brewers and the Cardinals on Monday.