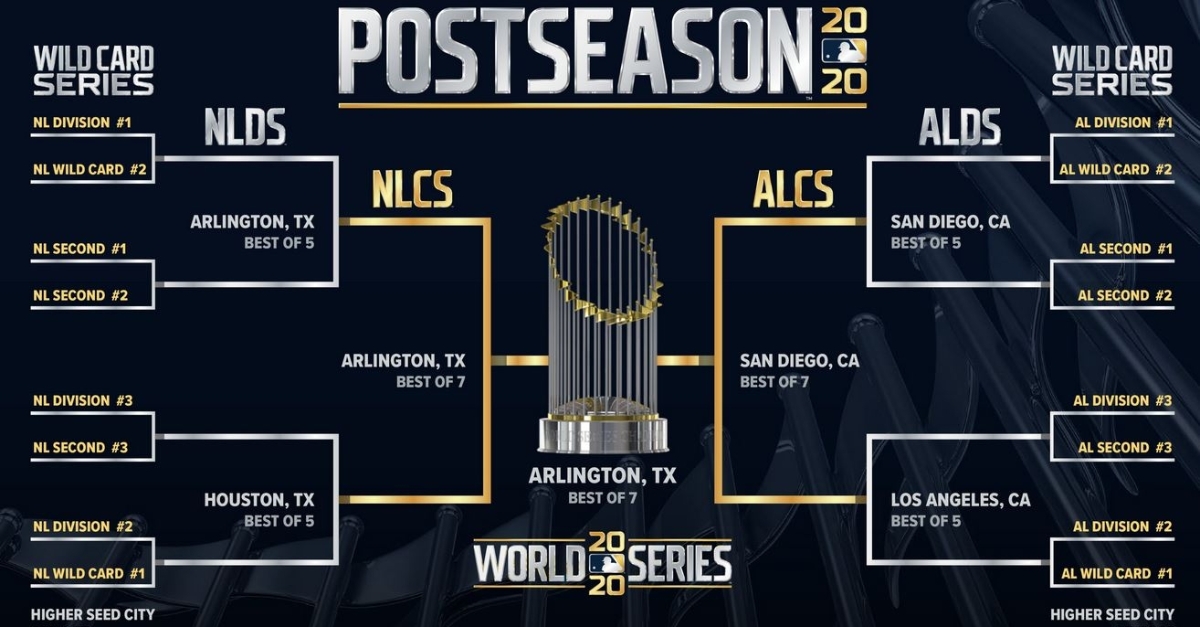 After many months of discussions, it became a reality yesterday. The MLB announced that the 2020 postseason will be played on a neutral field bubble format. This may not be ideal for fans or the teams making the postseason, but given the unknown of how COVID may affect teams in the fall, it was the best option to complete the postseason.

When you think about it in hindsight, is it a bad idea to do this? Look at the NHL, NBA, and MLS success by going to this bubble format. Not only have their positive cases been minimal, if at all, but it also brought a whole new level of excitement back for the postseason as a neutral sight proved to be the ultimate X-Factor.

With the postseason going to a neutral format and no home-field, we could see more upsets than in seasons past, which could be a good thing for the game.

Here is what we know and how the 2020 postseason will shake out.

We already knew coming into the season that the playoff field would expand from 10 teams to 16 teams, with eight teams coming from each league. That allows for the best of three wild card series to be seeded as follows: 1 -8, 2-7, 3-6 4-5. The winners of the 1-8,4-5 series will play each other in the divisional round as the winners of the other two series. The format from that point on would be the same as a regular postseason without the home field advantage aspect.

As things sit right now, the Chicago White Sox would be the top see in the American League and face off with the Cleveland Indians. Tampa Bay is the No. 2 seed and is set to face the Blue Jays. Oakland is the three seed with Houston looming while the Twins are the four seed with a potential matchup against their postseason nemesis New York Yankees.

The National League is much clearer cut in terms of positioning. Los Angeles continues to lead the way as the No. 1 seed as they would face the Giants. Despite posting the same record as the Braves at 29-20, the Cubs currently own the two seed with the Braves sitting at the three seed. That is significant because the Cubs would face the Phillies right now with the Braves seeing the Cardinals again. The biggest surprises are the No. 4 and No. 5 seed in which the Padres hold the four seed and the Marlins sitting at NO. 5.

A lot can change over the next week, but the seeding is essential, at least for the first round, for one reason. It is the only round that will not be played on a neutral site. Instead, the wild card matchups will be a best of three series played at the higher seeds site. That could go a long way in determining the rest of the postseason matchups.

Once that wild card round is complete, the Playoffs would begin to take their standard form but on a neutral bubble situation. The American League teams will stay out west playing in either San Diego or Los Angeles while the NL will head to Texas to play at Houston or Arlington. Following that Divisional round, teams will move to the Championship series, which will see the AL remain in San Diego and the NL stay in Arlington.

The only issue I have with the bubble format is the World Series, as they have determined it will be hosted at the new Globe Life Park in Arlington. I understand they wanted to keep things neutral, but why not have a list of stadiums running based on who makes the series. If the Dodgers and Rays made the series, then Texas is an ideal fit as it would be right in the middle of both cities.

However, what would happen if the Dodgers and the A's made the series. Wouldn't it make more sense to move the series to Arizona or keep them in California to reduce travel? Moving north, what if the unthinkable happened with both the White Sox and Cubs making the world series. Why have the series in Texas? You want to reduce travel and keep things neutral. You could quickly move that series to Miller Park in Milwaukee.

I get the MLB wanted to get a head-on this, but they could have had the World Series tentative depending on who made the world series. Another significant change in the postseason will be no off days until the world series. With teams stationed in one city with no travel, it does make sense and makes things easier for travel and scheduling. Regardless of your thoughts on the situation, it does make sense so let's enjoy the ride.

The Wildcard round is scheduled to begin on September 29, with the American league kicking things off. The National League will follow suit on September 30, with that round concluding on October 2. After this round is over, teams will have a couple of days to travel as they will need to go through COVID protocols before they can resume play.

Once again, the AL will kick this round off on October 5 with the NL following suit on October 6. Should all series go the full five games, October 10 would be the final day of the divisional round before the Championship series begin on October 11 and would run through the 18th.

Teams will then have one day to prepare for the World Series, which will begin on October 20 in Arlington. After two games, teams will have a day off, as this will be the only series that will follow the previous playoff format. If necessary, game seven of the World Series will conclude on October 28, ending earlier than in seasons past.