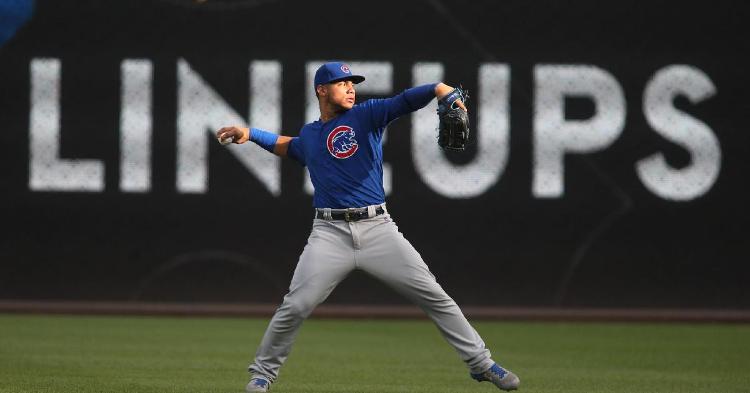 PITTSBURGH — The baseball gods giveth, and the baseball gods taketh away. Willson Contreras of the Chicago Cubs (45-42) learned that the hard way at PNC Park on Wednesday. Making his first career start in right field, Contreras, the Cubs' starting catcher, made the best defensive play of the game in the bottom of the eighth to help maintain Chicago's lead over the Pittsburgh Pirates (42-43). However, in the bottom of the ninth, Contreras botched a catch that led to the Pirates scoring two runs and winning in walkoff fashion. The back-and-forth affair featured multiple lead changes and ended with the Pirates coming out on top by a final score of 6-5.

Starting behind the plate for the Cubs in place of Contreras was Victor Caratini, and he made quite an impact with a bat in his hands. The switch-hitting backstop homered from both sides of the plate, as he hit a pair of home runs as part of the first multi-homer performance of his career. From the left side of the plate, Caratini swatted a 414-foot solo blast to right-center off Pirates starting pitcher Chris Archer in the top of the second, which put the Cubs up 1-0. Later, in the top of the seventh, Caratini took Pirates reliever Michael Feliz deep from the right side of the plate, with his 2-run dinger giving the Cubs a 5-4 lead. As a result of his two go-ahead bombs, Caratini doubled his 2019 homer total from two to four over the course of the evening.

A few frames after the opening-inning round-tripper from Caratini, the Cubs increased their lead to two runs in the top of the fourth. Archer issued a couple of walks in advance of Cubs second baseman Addison Russell scoring Contreras from second on a single to left. The Pirates quickly responded in the bottom of the fourth, with Cubs starting pitcher Yu Darvish giving up back-to-back doubles and a 2-run homer in the first three at-bats. After Starling Marte led off with a 2-bagger, Josh Bell plated Marte with a double of his own. Melky Cabrera then came through with a 413-foot jack to right-center that put the Buccos in front.

Capping off a hard-fought plate appearance, Cubs shortstop Javier Baez evened the score at three runs apiece by going yard on a 411-foot solo tater in the top of the fifth. Coming on the eighth pitch of the at-bat, the shot to straightaway center field marked Baez's 22nd long ball of the season. The tug-of-war raged on after that, though, with Bell smacking a 405-foot solo home run out to left in the bottom of the sixth, thereby regaining the lead for the Pirates. Caratini then responded with his aforementioned 2-run moonshot that carried 408 feet beyond left field with two outs in the top of the seventh. Contreras, who reached third base as a result of an infield single that was accompanied by a throwing error in the previous at-bat, crossed home plate on Caratini's second home run of the night.

The string of good fortune continued for Contreras in the bottom of the eighth, as he gunned down Cabrera at home after charging a single hit by Jose Osuna to shallow right-center. Contreras fired a bullet to Caratini, who applied the tag and kept the Cubs' 5-4 lead intact. Thereafter, a turning of the tide occurred for Contreras, who showcased his inexperience at playing in the outfield during the fateful ninth inning. With closer Craig Kimbrel attempting to lock up his second save as a Cub, Contreras failed to glove a fly ball hit near the foul line by the Pirates' Jung Ho Kang with one out and a man on first. The ball bounced off the tip of Contreras' outstretched glove, allowing the lead runner to make it to third. Kang was credited with a double on the play, but Contreras definitely could have made the catch.

The Pirates found themselves in the proverbial catbird seat at that point, and they did not waste the opportunity. In the aftermath of Contreras' blunder, Russell made a valiant effort at throwing out a baserunner at home after fielding an ensuing chopper, but Caratini's tag attempt was not in time. Then, with the game tied and runners on the corners, Kimbrel had the chance to draw an inning-ending double play. Instead, Corey Dickerson won the game for the Pirates by skying a sacrifice fly to left that ushered Kang home for the winning run. The 6-5 loss extended the Cubs' losing streak to four games and provided Kimbrel with his first blown save and losing decision as a member of the North Siders. The Cubs will have to win on Thursday in order to avoid suffering a dreaded 4-game sweep against a division foe.