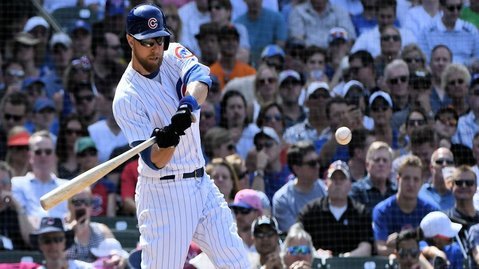 Ben Zobrist will remain at the Single-A level for at least a little while longer. (Credit: Matt Marton-USA TODAY Sports)

On Tuesday, the Chicago Cubs announced that veteran utility man Ben Zobrist would be moving from one Single-A assignment to another along his journey to making it back to the big leagues. While Zobrist has been playing for the South Bend Cubs since last Friday, he will next suit up for the Myrtle Beach Pelicans, a team that plays at a more competitive tier of Single-A ball than the South Bend squad.

Zobrist is slated to compete for the Pelicans on Thursday, Friday and Saturday for a trio of Myrtle Beach home games at TicketReturn.com Field at Pelicans Ballpark. There is no word at this time as to where Zobrist will go from there, but he is almost certain to be promoted to Double-A or Triple-A if his three-day stint with the Pelicans goes well.

.@Cubs have announced that 2016 World Series MVP Ben Zobrist will be assigned to the Pelicans from August 8-August 10. Full info: https://t.co/E1qVnIx7dF