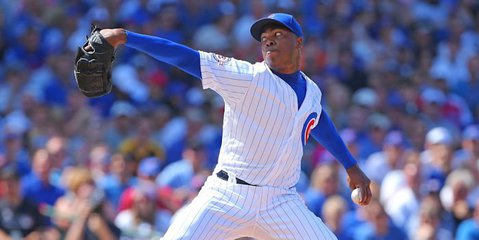 The Chicago Cubs won the World Series for the first time since 1908 and are not done celebrating their 2016 title anytime soon. The New York Yankees are coming into town and Aroldis Chapman will be given his diamond Championship ring in a pre-game ceremony before Friday afternoon's game.

"It's big. I think every player wants to get to the World Series and have a World Series ring," Chapman said to reporters recently. "The fact that I'm going over there and getting a ring means a lot to me."

Chapman had said during the offseason that Cubs manager Joe Maddon had overworked his arm in the postseason but all things are fine now with player and manager.

Regardless of what you think of Chapman's off-the-field issues, he was a vital reason why the Cubs were able to go all the way during the 2016 postseason.

Journeyman pitcher Adam Warren will also be given a ring by the Cubs executives for his help in the 2016 season.

Ringing in the return of a couple former #Cubs.