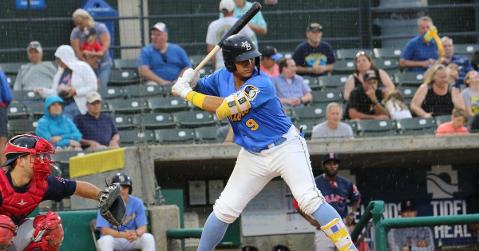 MYRTLE BEACH, S.C. (June 28, 2019) - Myrtle Beach Pelicans' catcher Miguel Amaya has been selected to participate in the SiriusXM All-Star Futures game on Sunday, July 7 at 7:00 p.m. at Progressive Field in Cleveland, Ohio. Along with Amaya, former Pelican pitcher Adbert Alzolay has also been chosen to represent the Chicago Cubs in Cleveland.

Amaya, a 20-year-old backstop, will make his second-career appearance in the Futures Game after participating in last year's game. The Herrera, Panama native was the starting catcher for the World Team in 2018 and went 0-for-3.

Ranked as the No. 2 prospect in the Chicago Cubs' farm system, Amaya is the No. 76-ranked prospect in all of baseball, according to MLB.com. In his third professional season, as of June 27, Amaya is hitting .207/.341/.351 with five homers and 24 RBIs this season for the Pelicans.

Defensively, Amaya has thrown out the second-most would-be base stealers in all of minor league baseball. Amaya has tossed out 30 runners and has a caught stealing percentage of 33.7%.

The Cubs signed Amaya in 2015 out of Panama and, after spending 2018 in Low-A South Bend, the Pelicans backstop is one of four players in the Carolina League to be named to the Futures Game.

Alzolay is the No. 4 prospect in the Cubs' system and was recently promoted to the Cubs after spending time with Triple-A Iowa and High-A Myrtle Beach this season. This is his first selection to the SiriusXM All-Star Futures Game.

Through two appearances with the Cubs, Alzolay is 1-0 with a 2.08 ERA and has struck out nine in 8.2 innings of work.

The 21st edition of the SiriusXM All-Star Futures Game will feature an American League vs. National League format for the first time in 20 years. The game will be a seven inning game and will follow the Celebrity All-Star Game. Amaya and Alzolay will represent the NL team that is managed by four-time All-Star Dennis Martinez while Hall of Famer Jim Thome will manage the AL team.

?@adbert29? on his selection to Futures Game: pic.twitter.com/v6l8LeFc9R

Representing the Cubs at the Futures Game: