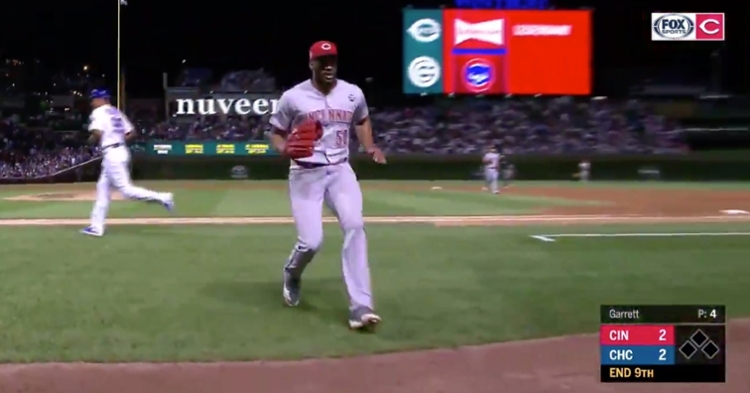 Cincinnati Reds reliever Amir Garrett poked fun at his history of starting fights by running to the dugout in order to avoid one.

CHICAGO — Cincinnati Reds reliever Amir Garrett has a history of inciting conflicts in his big-league career, particularly with divisional foes. Garrett was at the center of an epic brawl in a game against the Pittsburgh Pirates earlier in the season, and he has also been involved in a few tiffs with the Chicago Cubs in recent years.

However, Garrett wanted nothing to do with Cubs left fielder Kyle Schwarber on Wednesday night. After Garrett struck Schwarber out to force extra innings, he was fired up while walking off the mound, and Schwarber took umbrage with the fiery display.

Schwarber barked at Garrett, and as soon as Garrett realized that Schwarber was irked, he bolted for the dugout with his arms raised as if to indicate that he did not have any interest in partaking in a skirmish.

If Garrett were to get in another on-field fight in the aftermath of the brawl with the Pirates from a few months ago, MLB would likely lay the hammer down on him in terms of punishment. Therefore, Garrett made it demonstratively clear that he had no desire to engage in a fracas at Wrigley Field and was probably wise to do so.