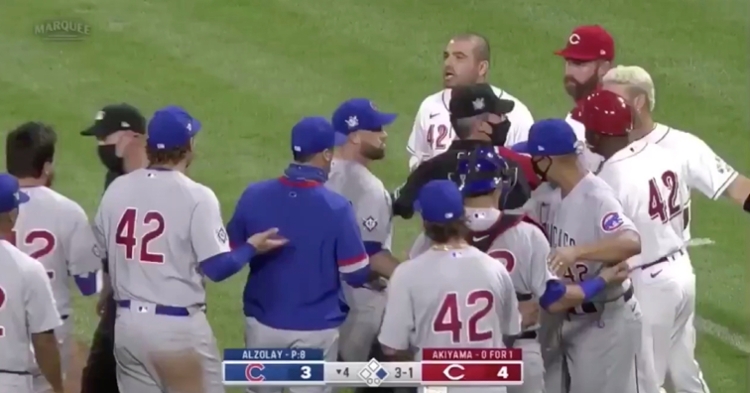 Veteran Reds slugger Joey Votto was ejected after storming out of the dugout to confront fellow first baseman Anthony Rizzo.

CINCINNATI — The fourth inning of the Chicago Cubs-Cincinnati Reds clash on Saturday night featured four ejections, all sparked by a pitch thrown over Anthony Rizzo's head. In the wake of Cubs manager David Ross and another member of the Cubs' coaching staff getting ejected in the top of the fourth for complaining about a pitch that sailed over Rizzo's noggin, Cubs pitcher Adbert Alzolay took matters into his own hands.

Alzolay airmailed a pitch over Shogo Akiyama's batting helmet in the bottom half of the same inning at Great American Ball Park, likely in an attempt at sending a message, and the benches subsequently emptied. Reds sluggers Joey Votto and Jesse Winker were ejected for coming onto the field in order to confront Anthony Rizzo, who they seemed to think had said something snarky to the Reds' dugout. Rizzo acted innocent and avoided being tossed. Nothing else noteworthy came off the modest fracas, but, due to MLB's COVID-19 regulations, suspensions could come of it. Reds manager David Bell was also tossed, making it the first big league game this season in which both managers were thrown out.

Benches clear between the Cubs and Reds. pic.twitter.com/WaP2MSQNm3

First time this season both managers have been tossed from a game. Ross and Bell both ejected