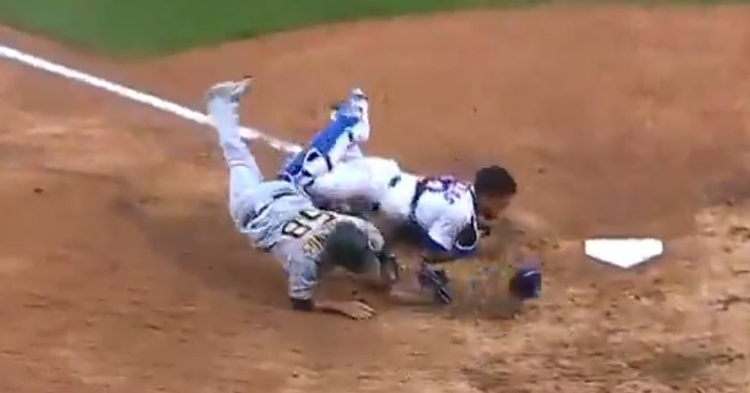 Jacob Stallings collided with Willson Contreras, who tagged Stallings out after receiving a throw from Kyle Schwarber.

CHICAGO — Right off the bat in the first extra-inning game of the season for the Chicago Cubs, a noteworthy play happened at the plate. Due to this year's extra-inning rules, the Pittsburgh Pirates started the 10th inning with a runner on second base, and an aggressive send home on a leadoff hit resulted in an out.

The Cubs and the Pirates were tied 1-1 at Wrigley Field entering extras on Sunday, and Pirates catcher Jacob Stallings, who started the inning at second, was sent home on a hit to left field by Josh Bell. Pirates third base coach Joey Cora took a risk by sending the lumbering Stallings home, and Cubs left fielder Kyle Schwarber made him pay.

Schwarber fired home to catcher Willson Contreras, who applied the tag well out in front of the plate. A major collision took place between the two backstops, and a replay review commenced to determine whether or not Contreras had illegally blocked the plate. The call was upheld, keeping the game tied.