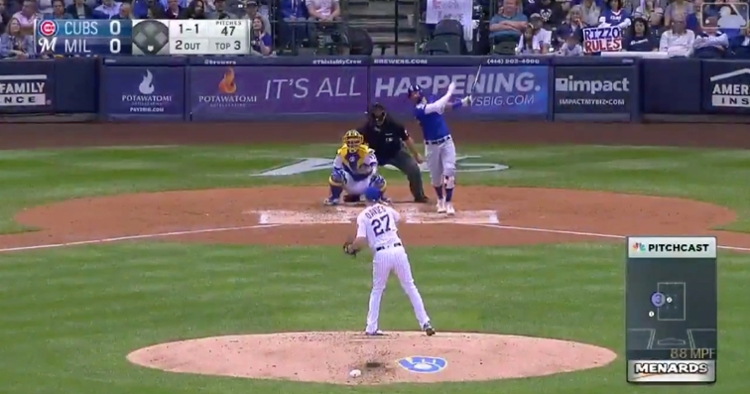 Chicago Cubs right fielder Nicholas Castellanos powered out an opposite-field blast that provided the Cubs with a lead.

MILWAUKEE — Continuing to thrive by way of opposite-field home runs, Chicago Cubs right fielder Nicholas Castellanos jacked a solo shot out to right-center field on Friday. The blast, which marked Castellanos' 13th long ball in a Cubs uniform, put the Cubs up 1-0 over the Milwaukee Brewers.

Castellanos took Brewers starter Zach Davies deep on a cutter in the top of the third. The round-tripper at Miller Park carried 387 feet and sported a launch angle of 30 degrees after leaving the bat at 102 miles per hour. Serving as Castellanos' 24th homer of the season, the dinger was hit with two outs.

All that you touch
You Change

All that you Change
Changes you pic.twitter.com/8ArWQZ5tAf

Homers & Handshakes, provided by Nick Castellanos. #Cubs take 1-0 lead on his 24th of the season. pic.twitter.com/gmXXJNEo03