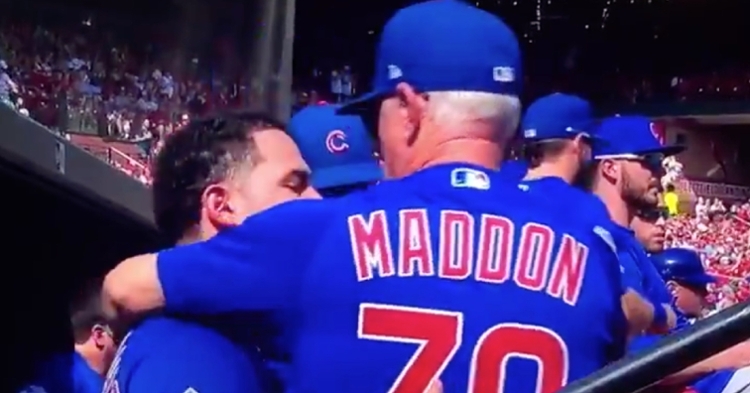 Willson Contreras and Joe Maddon hugged it out during Maddon's final game as the Cubs' skipper.

CHICAGO — One of the most iconic scenes of the Chicago Cubs' 2019 season came in the final game, with catcher Willson Contreras sharing a moving hug with manager Joe Maddon after it was announced that Maddon would be relieved of his duties following the season finale. Contreras and Maddon embraced one another in the dugout during the Cubs' season-ending loss at Busch Stadium to the St. Louis Cardinals, and it was captured on video.

The moving moment clearly meant a lot to Contreras, who is on record saying that Maddon became like a father to him while managing the Cubs, because the backstop commissioned a painting to be made that depicts the hug. Illinois-based painter Austin Ploch was paid to recreate the scene on canvas, and Ploch recently tweeted out an image of the finished product, which is something that Contreras will be able to cherish for the rest of his life.

Socio was my pleasure to play for you and i cannot thank you enough, Was really special to have you as my 1st MLB Manager. Thanks for all the advices that I will never forget. You will always be remembered everywhere but The city of Chicago will always love you ?? #WorldSeriesChamps2016 #GreatHumanBeing