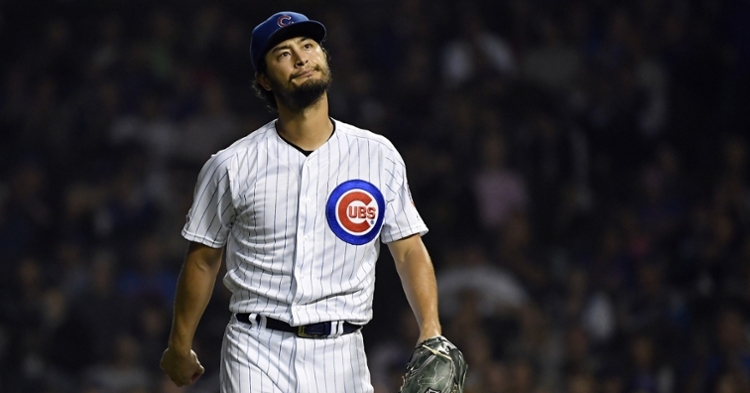 Chicago Cubs starting pitcher Yu Darvish is currently a focal point of the sign-stealing accusations being levied against the Houston Astros, as Darvish seems to be a prime candidate for someone who was negatively affected by the cheating during the 2017 World Series, when Darvish was pitching for the Los Angeles Dodgers. On Friday, Cubs blog Bleacher Nation tweeted a video implying that maybe Darvish was also tipping his pitches in a Cubs uniform.

The video from Bleacher Nation involves star Milwaukee Brewers right fielder Christian Yelich. With Yelich batting against Darvish at Miller Park this past season, the outfielder can be seen darting his eyes to his right before Darvish steps off the mound. It is obviously a bit of a reach to imply that the Brewers were somehow cheating in that situation, especially considering that the Astros' cheating apparently involved an elaborate camera-based scheme that no other team could replicate.

Regardless, Darvish acknowledged on Twitter that Yelich's behavior caused him to step off the mound. Darvish also tweeted that he was not implying that the Brewers were stealing signs. He merely stated that any odd behavior like that from a batter causes him to regroup and go through his buildup to the pitch all over again. Apparently, Yelich felt slighted by Darvish's tweets and responded with a juvenile tweet, telling Darvish "to be better than this" and stating that "nobody needs help" when facing Darvish. Atlanta Braves third baseman Josh Donaldson disagreed, posting a hilarious response to Yelich's tweet in which he asked for Yelich to give him some intel on Darvish.

It is worth pointing out that Darvish put together a stellar 0.90 ERA against the Brewers in 2019, so Yelich and his teammates might very well "need help" when batting against Darvish. The reason for Bleacher Nation unearthing the video is that Darvish made a claim after that particular game that he noticed instances of Brewers batters cutting their eyes toward the outfield when he was on the mound. With that being said, Brewers general manager David Stearns previously worked for the Astros, so certain suspicious Cubs fans have made assumptions about Stearns' potential for encouraging cheating.

Here's the video - it happens very quickly, and just before Yu steps off. Yelich is locked on Darvish, eyes flick toward left center, then back to Darvish. Yu steps off. pic.twitter.com/hqOSvGMGEh

Attempting to placate the situation with Yelich, Darvish tweeted out a mollifying message in which he made it clear to Yelich that he was not accusing him or the Brewers of anything. Sign stealing is a part of the game and one of many aspects of gamesmanship that go into competing at the highest level of baseball. However, the Astros supposedly went beyond what is acceptable by using technological means of stealing signs, so there is probably no need for pitchers to be on edge concerning other teams using a similar means of sign stealing. As for Yelich, he should learn to maintain his composure before taking unnecessary jabs at fellow big leaguers on social media.

Be better than this. Nobody needs help facing you https://t.co/DlUDwjJn4X

Easy man.
I'm not saying your are stealing signs.https://t.co/kc0wcuTfeO https://t.co/CBQMa3p17Y

?? I could use some help off him whatcha got?