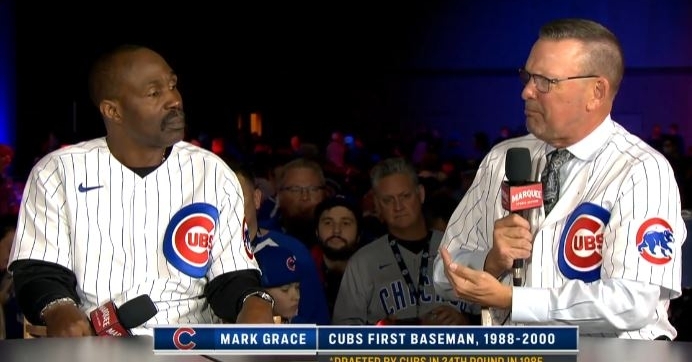 Former Cubs greats Mark Grace and Shawon Dunston were named as 2023 Cubs Hall of Fame inductees on Friday during the Cubs convention.

“I got numb,” Dunston said when he heard the news. “Really, it’s not for me, it’s for Billy Williams, Ernie Banks, Ryno [Ryne Sandberg], it’s Andre [Dawson], it’s [Greg] Maddux, they’re all Hall of Famers. Now they’re putting me in there. But then when they told me I was going in with Grace, I felt a little more comfortable and I really felt thankful.”

Grace was so thankful for being inducted with his fellow teammate Dunston.

“This is such an honor for me. Going in with Shawon. This couldn't be a better day in my career to go in with No. 12, ” Grace said.

“That’s a quarter of my life in a Cubs uniform,” he said. “I love the fact that most of his career, I was [Dunston’s] first baseman. .?.?. Shawon and I, the reason we’re friends is not because I could catch his throws — and I challenge any other [damn] person to do that.”

Both players were All-Star performers and two of the Cubs' favorites ever.