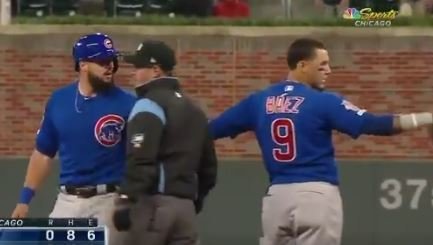 The Chicago Cubs are not having a fun night in Atlanta.

If six errors were not enough, the benches cleared in the eighth inning when the Braves were upset about a 'hard slide' by David Bote into second base.

There was no contact on the slide as Bote slide a little right of the bag.

Dansby Swanson was upset about the play and Josh Donaldson had a few words with Bote. Both benches casually came out but left after a few moments.

I don't blame Bote being a little peeved being down eight runs and players arguing with him over his slide.

Here is the entire benches clearing incident involving a double play turned at 2nd on David Bote. Looks like it was an 'unwritten rules' type of situation with @Braves up 8-0 on @Cubs in the 8th. #GoCubsGo pic.twitter.com/JbhaB9VQTF

Man, has the game gotten soft. Dansby Swanson is mad because David Bote went hard into second and despite never getting touched he went all tough guy. Maybe this will wake the Cubs the hell up.