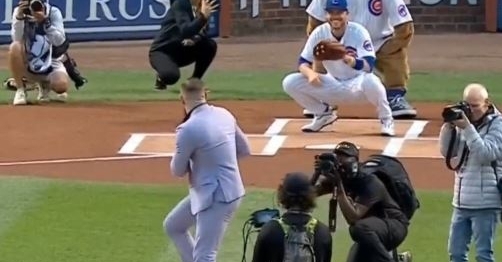 McGregor with a pitch just a little bit outside

UFC's Conor McGregor is a former featherweight and lightweight champion.

However, he might need to brush up on his pitching skills on the mound.

McGregor was invited to throw out the ceremonial first pitch at Wrigley Field on Tuesday night and airmailed an erratic throw that nearly took out people.

Not even veteran umpire Joe West would have called the throw a strike.

Cubs third baseman Patrick Wisdom had a look of shock when the baseball was launched and it went so far away from him.

I didn't have high expectations that McGregor would throw a baseball decent but this is an all-time worst throw comparable to 50 Cent with the Mets.

.@TheNotoriousMMA knows not to throw anything in the zone to @PatrickWisdom5! pic.twitter.com/jy6ZQK5VVP

A few photos of McGregor after his throw: