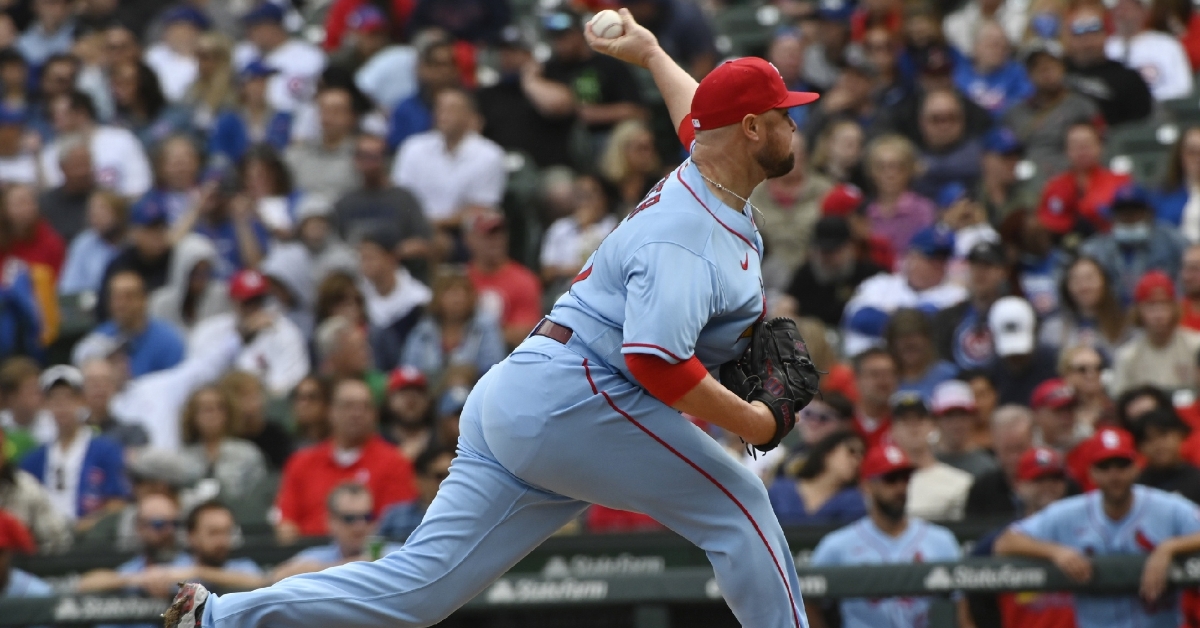 CHICAGO – If you thought seeing Jon Lester pitch for Washington was earlier this season, wait until you watch Saturday's game at Wrigley Field. They were looking to keep their league-leading and franchise-record winning streak going the St. Louis Cardinals (86-69) took on the Chicago Cubs (67-88), who were trying to finish the season above .500 at home.

Adrian Sampson made another turn in the rotation, who continues to pitch exceptionally well in his handful of starts. Sampson not only got through six innings, but allowed a pair of runs to go with four strikeouts keeping the St. Louis offense in check most of the game. Opposing him was someone Cubs fans are all too familiar with in Lester as he doesn't look right in Cardinal red.

When he started against the Cubs earlier this season, Lester didn't have his best luck as the Cubs knocked him around early, often making his homecoming less of a homecoming. Although not as bad, Lester ran into similar issues this time around, allowing three runs on eight hits in five innings. He did what he needed to do to keep things close, which gave the Cardinals a chance to win the game.

I guess when you're hot, you're hot, as the Cardinals managed to take it to Codi Heuer in the seventh, pushing across three runs to take the lead. That proved to be the biggest difference in the game as the Cardinals held off the Cubs 8-5 and have now won 15 straight games.

lead in the second. With guys like Nolan Arenado, Paul Goldschmidt, and Tyler O'Neill stealing the headlines, the Cardinals have been contributions across the board, with Bader being one of those main contributors.

It took the Cubs three innings to get on the scoreboard but leave it to the bottom of the order to get things started. Sergio Alcantara led things off with a single before advancing to on the Sampson sacrifice bunt. Willson Contreras followed that up with an RBI double, and just like that, it was a 1-1 game. With two down in the inning, Ian Happ came through with a single putting the Cubs up 2-1.

Willy and Happ come through in the 3rd inning.

Willy and Happ come through in the 4th. pic.twitter.com/7fB7uzZbvv

Speaking of O'Neill, he has been on a tear this series, connecting for a solo shot in the fourth to tie things up as this was his third homer across the two days thus far. Looking to keep their offense trending in the right direction, David Bote led off the bottom half of the fourth with a single as the bottom third of the order was getting the job done once again.

An Alcantara infield single followed by an error on a Sampson bunt attempt had the bases filled with Cubs and only one out. Contreras picked up his second RBI of the game as his single gave the Cubs a 3-2 lead keeping the bases loaded in the process. Following the Frank Schwindel strikeout, Happ showed great patience working a walk to push home another run with the Cubs leading 4-2.

Given the way Sampson was pitching at this point in the game, you had to like the Cubs chances when it came to walking away with the win. That was until the seventh inning when Heuer entered the game, and the Cardinals began to make him pay. Arenado didn't make things easy as he doubled to lead off the seventh, setting the Cardinals offense up in a big way.

That was the beginning of four consecutive Cardinals hits, including singles by Yadier Molina, Bader, and Lars Nootbaar, with Bader and Nootbaar collecting RBIs to bring things back to even 4-4. In desperate need of an out, Heuer got Paul DeJong to fly out to center field, but the result was a sacrifice fly as the Cardinals took a 5-4 lead.

Whenever the Cubs seemed to have something going, a double play ultimately did them in, but it was the bottom of the eighth that stung the most. With Bote leading off with a triple off TJ McFarland to open the inning, the Cubs had a great chance to at worst tie things up. Trayce Thompson followed that up with a walk before the Alcantara strikeout had the Cardinals on the verge of getting out of the inning.

Needing a big hit against a left-handed pitcher, Rafael Ortega came to the plate and bounced one over to Goldschmidt, who threw home to get Bote. Looking to stay out of the double play, Bote got himself into a rundown before being tagged out between third and home. Things continued to worsen for the Cubs on that play as both Ortega and Thompson were caught in between bases as the Cardinals turned an unconventional double play killing the Cubs rally and keeping their 5-4 lead intact.

After Bader led off the ninth with a double, he turned in a spectacular trip around the bases, stealing third before coming home on a wild pitch strike three from Tommy Nance. The Cubs elected to challenge that call, but the call stood as the Cardinals made things 6-4. Paul DeJong followed that up with a two-run shot to rub salt into the wounds as the Cardinals built an 8-4 lead with their sixth unanswered run of the game. Happ added a solo shot in the bottom of the ninth, but that was a moot point.

The win gives the Cardinals 15 straight wins, which is now the longest streak in franchise history and has them looking like the Milwaukee Brewers of 2018, who ran down the Cubs in September. To make matters worse, the loss guarantees that the Cubs will finish the season under .500 at home, which hasn't happened in seven years.