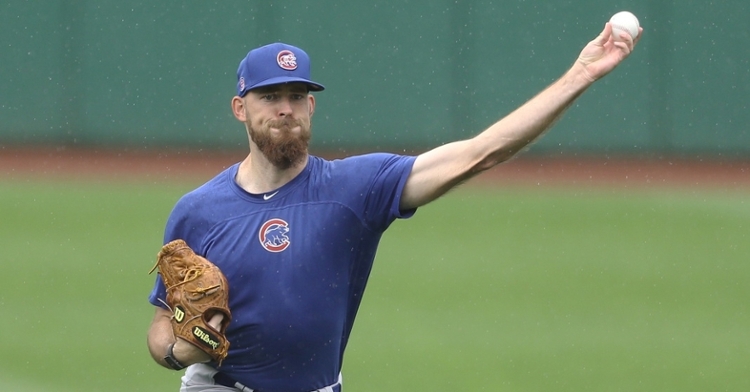 Much like the starting rotation, the bullpen is full of question marks this season regarding how good they can be. While four or possibly even five spots are accounted for, there are still nearly a dozen arms fighting for the final two or three spots heading into the regular season. Regardless of who the Cubs chose for those spots, they will have plenty of depth across the board, so I anticipate moving parts all season.

Today I will focus on the long-relief role and who some names could contribute in this spot. For the most part, these are the type of relievers that come in and either give you multiple innings or are the first ones in from the pen pitching, primarily in the sixth inning or sooner. The Cubs have had some solid options for these spots in the past, and I anticipate that again this season.

Kyle Ryan: The 29-year-old Kyle Ryan has been a fixture in the Cubs bullpen the past two seasons and is looking for more success this year. He not only filled a variety of roles from matchup lefty to long relief but has also seen some games as a fill-in closer or set up man. Ryan posted the best season of his career in 2019 when he pitched in a career-high 73 games and posted a 3.54 ERA with 14 holds.

Expecting more of the same in 2020, Ryan saw action in just 18 games last season and struggled across the board. His ERA rose to 5.17, and his command was greatly diminished, leading to lots of hard contact. That is not a compelling situation for a guy who throws in the 87-88 range. Much like many Cubs starters, Ryan is not a high-velocity type of pitcher and prides his success on location and soft contact.

The more contact he induces, the better chance the defense must make a play if he hits his spots. Ryan has yet to pitch this spring as he deals with COVID and is still trying to recover. Expect him to start the season on the IL but move into the pen when ready.

Ryan may not start the season with the Cubs, but he will be there at some point. Whenever that time comes, look for him to be trusted a lot as he has been an often-used option for the past two years. Ryan has shown the ability to go multiple innings and can be a matchup lefty used in critical situations. A bounce back from him will be huge for this pen.

Brad Wieck: Over the past several seasons, the Cubs have had good luck when it comes to acquiring left-handed relievers. 2016 brought swingman Mike Montgomery to Chicago, who came up with the final out in the 2016 world series. 2017 saw Justin Wilson added to the mix as he provided the Cubs with some big punchout numbers. 2019 saw the Cubs not only add guys like Josh Osich and Andrew Chafin but another lefty in Brad Wieck who has a ton of potential.

Wieck was looked at to provide a big lift to the Cubs pen last season, but a heart procedure in Spring Training limited him to just one game in 2020. Missing the first two weeks of camp this season, Wieck returned to the mound for the first time yesterday and looked like his old self. Although he may be a little behind some of the other relievers, the Cubs lack lefties in relief, and I expect him to earn a spot, especially with Ryan down.

I really like Wieck a lot, and hopefully, he is healthy and ready to contribute. He reminds me a lot of Sean Marshall when he was in the Cubs bullpen expect he has a 95 MPH heater instead of just 88. His high spinning 12-6 curve is his out pitch, and it has become a nightmare for left-handed pitchers. Without a clear role for him this season, look for Ross to play around with him and find a spot that works.

Shelby Miller: When the Cubs signed Shelby Miller to a minor league deal with an invite to spring training, no one knew what to expect. Well, not only have fans been impressed, but I think the organization will have a tough decision to make about where to put him on opening day.

Miller always had the tools to be an elite starter with the potential to be an ace. However, he never could get over a slew of injuries seeing limited action since 2018. All he wanted was a chance to prove himself this spring, and he certainly has proved he can still be a weapon.

In his seven innings and four games this spring, Miller has not only posted a 1.29 ERA but has walked just two to go with eight strikeouts. Not to mention his velocity is back in the 94 MPH range, and you can see the stuff is still there. With Tyler Chatwood now with the Toronto Blue Jays, the Cubs will be looking for a valuable swingman out of the pen. Miller could be and should be that guy based on his performance so far.

Miller won't see a ton of games, but that might not be a bad thing. Instead, look for him to be the guy David Ross counts on when the bullpen needs a lift with someone eating innings. Also, given that injuries and inning limitations will be in place for some starters this season, Miller will also be a candidate to make several fill-in starts this season.

I have always been a fan of Miller and loved how he pitched when he was with the Cardinals. The injury history should concern everyone, but he does still have something left in his tank. This was an excellent pick-up by the Cubs, and so far, it is paying off in the most significant way. Hopefully, Miller carries that through to the regular season to become an important fixture in the Cubs pen.

Other guys like Tyson Miller, Cory Abbott, Justin Steele, Joe Biagini, and lefty Adam Morgan are options to fill in during the season in the long relief role as injuries will happen, and players will get moved around.