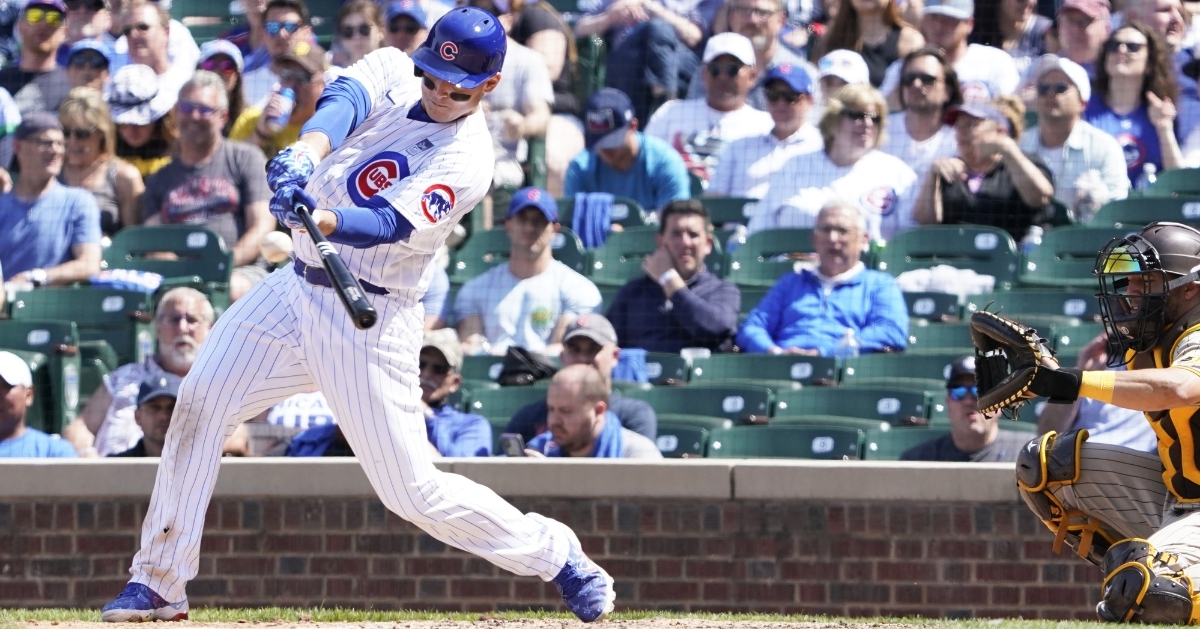 CHICAGO — Completing a three-game sweep of the San Diego Padres (34-23) at Wrigley Field, the Chicago Cubs (32-23) were led by a three-hit performance by Anthony Rizzo, who returned from an injury layoff on Tuesday, and solid five-inning start by Adbert Alzolay, who struck out seven. Javy Baez went yard with a lined two-run shot that provided the North Siders with insurance runs, and the Cubs went on to win Wednesday's game by a final score of 6-1, thereby improving to 9-1 in their last 10 games.

Manny Machado singled off Alzolay in the top of the first and reached second before being left stranded by an inning-ending strikeout of Eric Hosmer. Rafael Ortega hit a single in the bottom of the second and stole second base but did not score. For the most part, Alzolay and Dinelson Lamet were engaged in a pitching duel early on, but the Padres broke the scoreless tie in the fourth. Jake Cronenworth hit a base knock, and Jurickson Profar drew a walk. Ha-Seong Kim then plated Cronenworth with a two-out RBI single, and Alzolay concluded the half-inning by striking Tucupita Marcano out looking.

Rizzo and Patrick Wisdom singled in back-to-back fourth-inning at-bats, with Wisdom catching a lucky break when he accidentally made contact on a checked swing and hit the baseball through the infield. The Cubs' good fortune continued after that, as Hosmer lost control of the ball after fielding a chopper hit by Rafael Ortega. The fielding error allowed Rizzo, who likely would have been thrown out at the plate if not for Hosmer's gaffe, to score after riskily heading home.

A bloop single by Eric Sogard loaded the bases with one out, leading to a rather bizarre double play. P.J. Higgins hit a popup to shallow left field, and Kim, the shortstop, and Tommy Pham, the left fielder, pursued it. A violent collision ensued, but Kim somehow had the wherewithal to recover the ball, which he dropped after colliding with Pham, and throw it into the infield. The Cubs' baserunners assumed that the catch was made, so Wisdom tagged up and headed home. However, the other two runners stayed put, resulting in a double play being recorded via force outs at second and third, thus preventing the run scored by Wisdom from counting.

Pierce Johnson relieved Lamet to begin the bottom of the fifth and began by walking Nick Martini and Joc Pederson. Tim Hill relieved Johnson with two outs and gave up a two-run double hit to left-center by Rizzo. The go-ahead two-bagger was followed by Wisdom striking out looking on a questionable strike-three call. Rex Brothers tossed a 1-2-3 top of the sixth, and Miguel Diaz struck out the side in the bottom of the sixth.

Marcano singled off Brad Wieck with two outs in the seventh, bringing Tommy Nance out of the bullpen. A walk and a wild pitch made Nance's appearance somewhat dicey, but he drew an inning-ending groundout to leave two runners in scoring position stranded. Coming on Lou Gehrig Day, Nance's appearance was assuredly extra special, as his father is battling ALS.

The Cubs added to their lead in the home half of the seventh. A leadoff triple by Sergio Alcantara was followed shortly thereafter by Cronenworth, who moved to shortstop after Kim and Pham exited the game due to the collision, misplaying a chopper hit by Happ. Alcantara scored because of the Padres' second fielding error of the afternoon, and Baez proceeded to smack a two-run shot that headed out to left and bounced onto Waveland Avenue.

Rizzo hit another double in the next at-bat but was left on base. Daniel Winkler sat the Padres down in order in the top of the eighth, and Higgins recorded his first big league hit in the bottom of the half. Higgins singled off Austin Adams, who then plunked Alcantara. The Cubs failed to add to their lead in the eighth, but Winkler finished the Padres off in the ninth. Hosmer led off with a double, and Profar walked after that. Former Cub Victor Caratini grounded into a double play, and Winkler went on to prevent the Padres from scoring, with the 6-1 game ending on a Webster Rivas flyout with men on second and third. The Cubs have now swept four series this season.