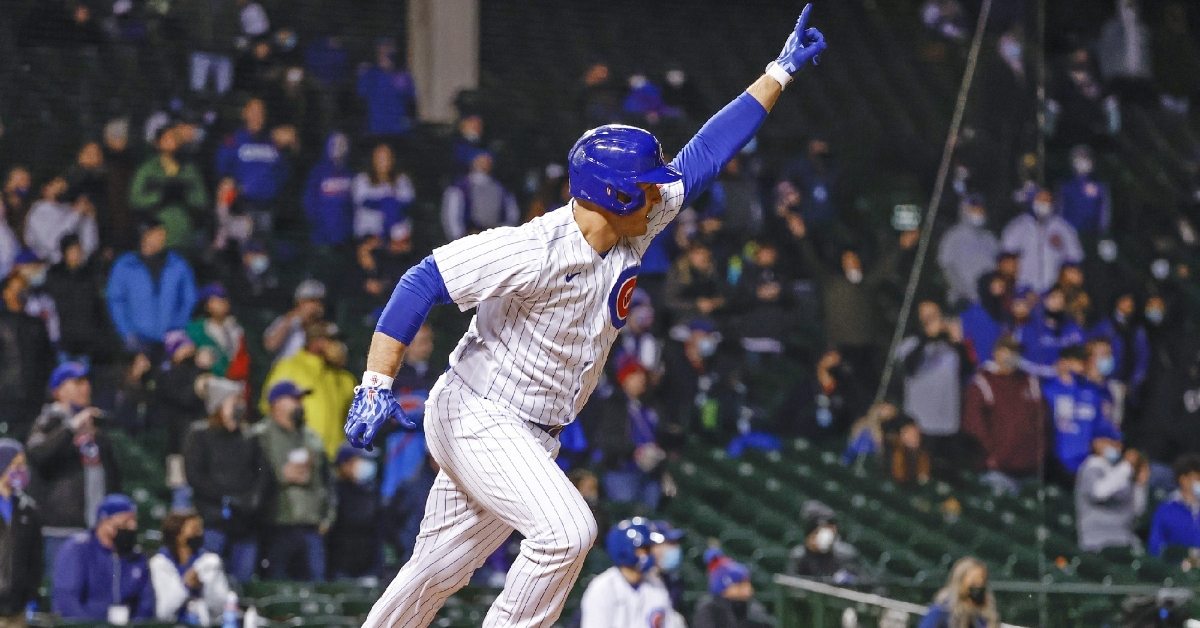 CHICAGO — What was intended to be a night off for Anthony Rizzo developed into much more than that on Wednesday. After not starting at first base and coming on as a pinch hitter late in the contest, Rizzo provided the Chicago Cubs (15-16) with their second consecutive extra-inning walkoff win. The Cubs wrapped up a three-game sweep of the Los Angeles Dodgers (17-15) at Wrigley Field via Rizzo's walkoff base knock in the 11th inning, winning 6-5 on the evening. Previously, a walkoff single hit in extra innings by David Bote ended the second installment of the series. Garrett Cleavinger gave up both of the aforementioned walkoff singles.

The early innings essentially constituted a pitchers' duel between Adbert Alzolay and Walker Buehler. Despite what his cinematic last name may indicate, Buehler did not, in fact, have a day off. For that matter, neither did Rizzo, who entered the on-deck circle in the bottom of the ninth and took over at first base in the top of the 10th. Entering the bottom of the third, both starters had five strikeouts, and neither team had a hit. That changed when Matthew Duffy led off the home half of inning No. 3 by slapping a double down the third baseline. Three straight groundouts followed, and the tilt remained scoreless.

After striking out the first two batters of the fourth, Alzolay was taken deep by Max Muncy, who tallied a solo blast for the second game in a row. Muncy's long ball to left-center provided the Dodgers with a lead that Gavin Lux added to with an RBI double that plated Chris Taylor in the fifth. Alzolay, who appeared to be struggling with a blister, did not retake the mound to begin the sixth. Duffy tagged Buehler for another hit when he singled in the fifth, which set the stage for Jake Marisnick to hit a game-tying two-run jack to center.

Kyle Ryan relieved Alzolay and was pulled after the first three batters he faced all reached base. Ryan Tepera minimized the damage by drawing a fly ball, which resulted in a sacrifice fly for Will Smith, a groundout and another flyout to escape the half-inning relatively unscathed. Corey Seager scored the go-ahead run on Smith's flyout. Former Dodger Joc Pederson took advantage of a shift with a leadoff bunt to begin the bottom of the sixth. Soon afterward, he advanced to third base on a Javy Baez double. The Cubs left both baserunners stranded, however, as Buehler's solid outing ended with him getting out of a jam.

Rex Brothers allowed two Dodgers to reach base in the eighth but prevented Los Angeles from adding to its lead. Blake Treinen walked Pederson to start the bottom half of the frame, and Seager then committed a costly throwing error at shortstop after making a nice stop of a hard-hit ball. Seager botched his throw to second base, and Pederson made it to third on the play. The erstwhile Dodger then crossed the plate on an RBI groundout from Baez, leading to the matchup eventually heading to extras tied 3-3.

Baez, who hit a clutch two-run dinger in Tuesday night's extra-inning nail-biter, pulled off a pivotal defensive play in the 10th. Muncy hit an RBI double to deep center with two outs, and Lux scored as a result. Justin Turner was thrown out attempting to score on the play, as Baez gunned a bullet to Willson Contreras at the plate after gloving the relay throw. Contreras applied the tag on Turner to usher in the bottom of the 10th. The Dodgers challenged the ruling, but Turner remained out after the umpires checked the replay.

An embarrassing moment for Pederson proved critical, nonetheless, to keeping the Cubs alive in the bottom of the 10th. With Duffy beginning the half-inning at second, Rizzo drew a leadoff walk with Kenley Jansen pitching. A wild pitch enabled both runners to advance. Pederson then skied a towering drive to the warning track in right. The fly ball was caught, and Duffy tagged up and scored. Interestingly, Pederson assumed that he had just homered as soon as he made contact, so he flipped his bat and showboated while heading up the baseline. Although he did not hit a walkoff bomb against his old club, Pederson did level the score at four runs apiece.

Joc Pederson was so confident he hit a walk off ?? pic.twitter.com/b6eWghumiR

Dave Roberts opted to intentionally walk the two batters who followed Pederson, and the decision paid off, as Contreras then grounded into an inning-ending 6-4-3 double play. Alec Mills pitched the top of the 11th and gave up a leadoff single to Smith. Muncy advanced to third on Smith's base hit and was ushered home a few at-bats later, with a defensive gaffe giving him the chance to score. A grounder off the bat of Matt Beaty rolled to Rizzo, who gloved it right next to first base. Instead of stepping on the bag before throwing to Baez at second, Rizzo immediately fired to Baez, who assumed that Rizzo had gotten the force out at first, hence why he did not throw the ball back to Rizzo. "Big Rizz" seemingly made the correct decision, though, as not touching first kept the force play intact, meaning that if Baez had thrown back to Rizzo in time, Muncy's run would not have counted. Therefore, Muncy scored on what could have been an inning-ending double play. The Dodgers went on to load the bases with two outs, when Mookie Betts hit into a fielder's choice.

Cleavinger struck the first two batters of the bottom of the 11th out swinging, but Duffy knotted the score at 5-5 with a two-out single to center that scored Contreras from second base. Duffy stole second, and Tony Wolters drew a walk that brought Rizzo, the player whom David Ross intended to give the night off, to the plate. With the Dodgers' infield shifted to the right, Rizzo poked a single out to left-center, scoring Duffy from second and putting a bow on an action-packed 6-5 victory for the Cubs. Not interested in being enthusiastically mobbed by his overexcited teammates, Rizzo immediately ran off the field, into the dugout and down the stairs to the Cubs' clubhouse, making for a light-hearted ending to an otherwise intense game.

Anthony Rizzo walks-off the Dodgers and runs straight down the stairs. pic.twitter.com/4aovKsfPa7